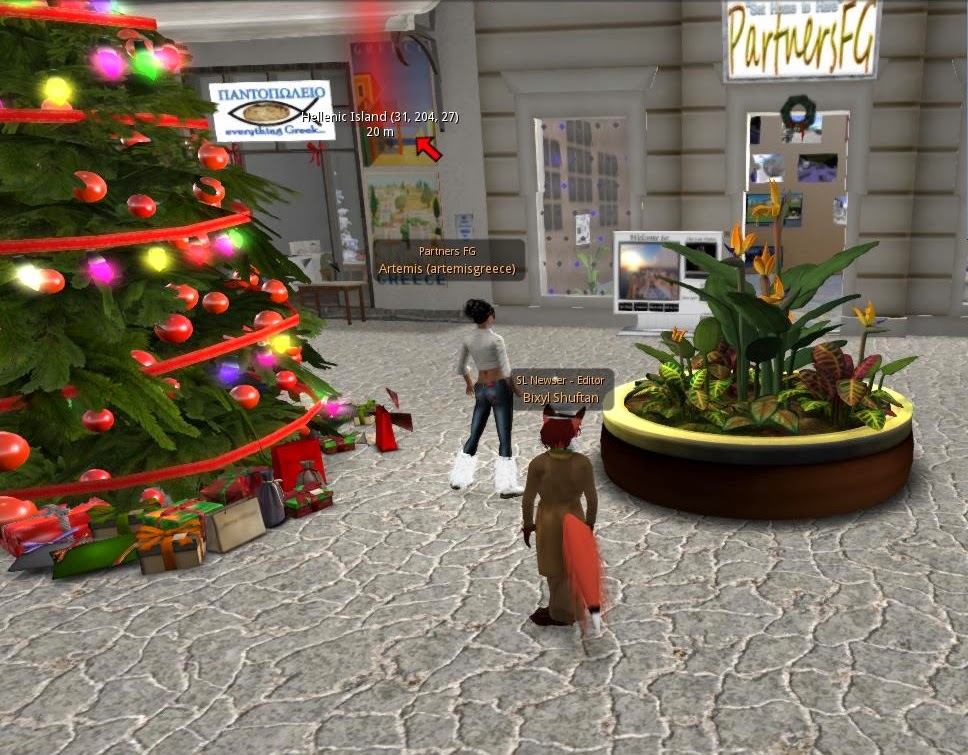 Last month around Christmastime, I came across a resident named Artemis (artemisgreece). It turned out she was the owner of a Greek island sim in Second Life: Myconos. Artemis, whom is Greek herself, invited me to take a look at the place, so I went over.

Myconos, located at the Hellenic Island sim, is based on the real life island of Mykonos, which is a little more than thirty square miles and is in the South Aegean Sea between mainland Greece and Turkey. Second Life's Myconos is smaller, but has much of its Greek charm. 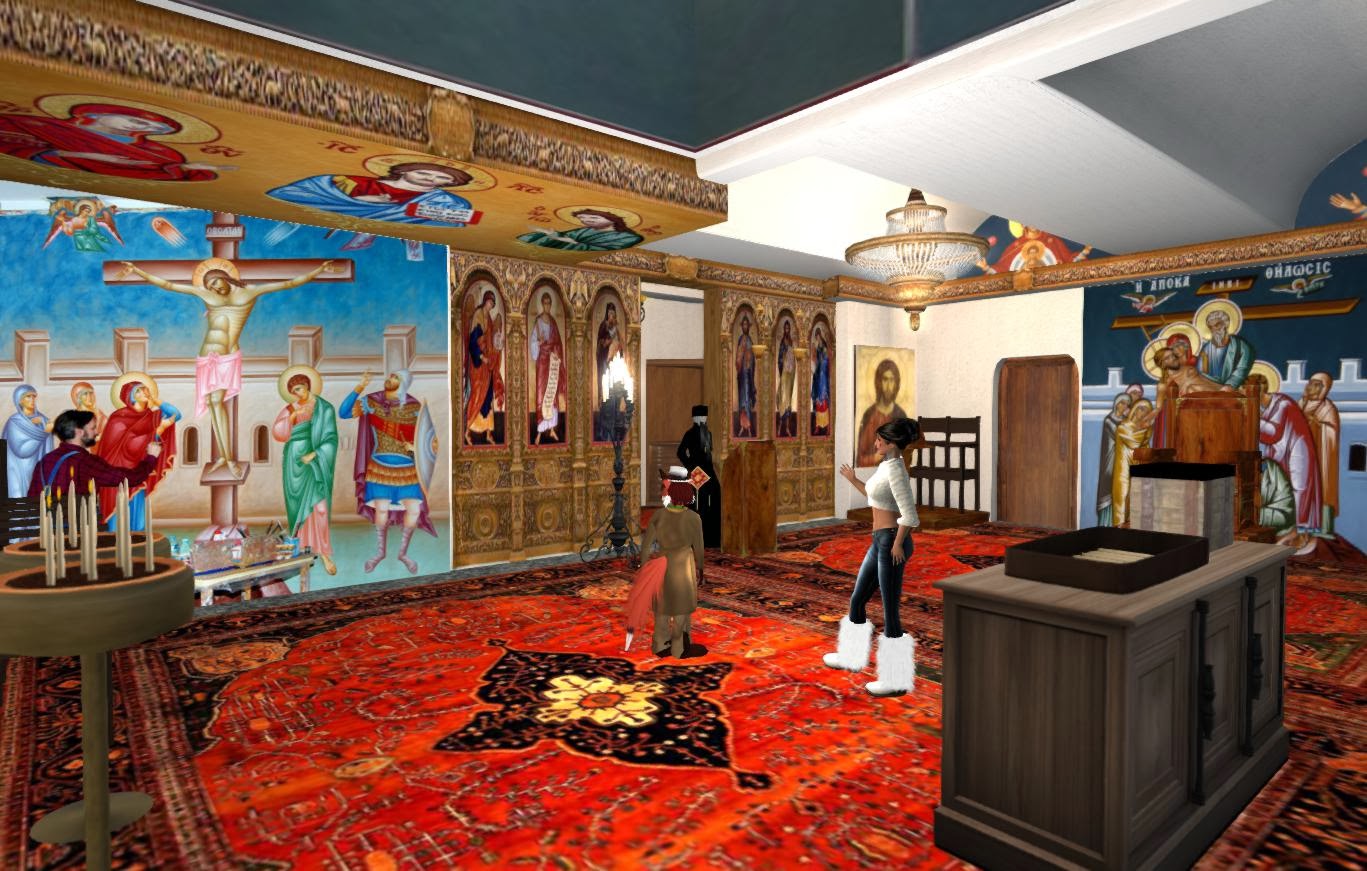 The entrance point takes one next to it's travel agency. At the time, there was a Christmas tree there, but it was removed after the holidays. Artemis showed me around, the two of us going down the town streets. Among one of the first places she showed me was one of the Eastern Orthodox churches, based on a real one on the real life island. "See how peculiar it is?" Artemis asked me, "no corners, no wood. Just plaster." The inside had a number of Christian images. 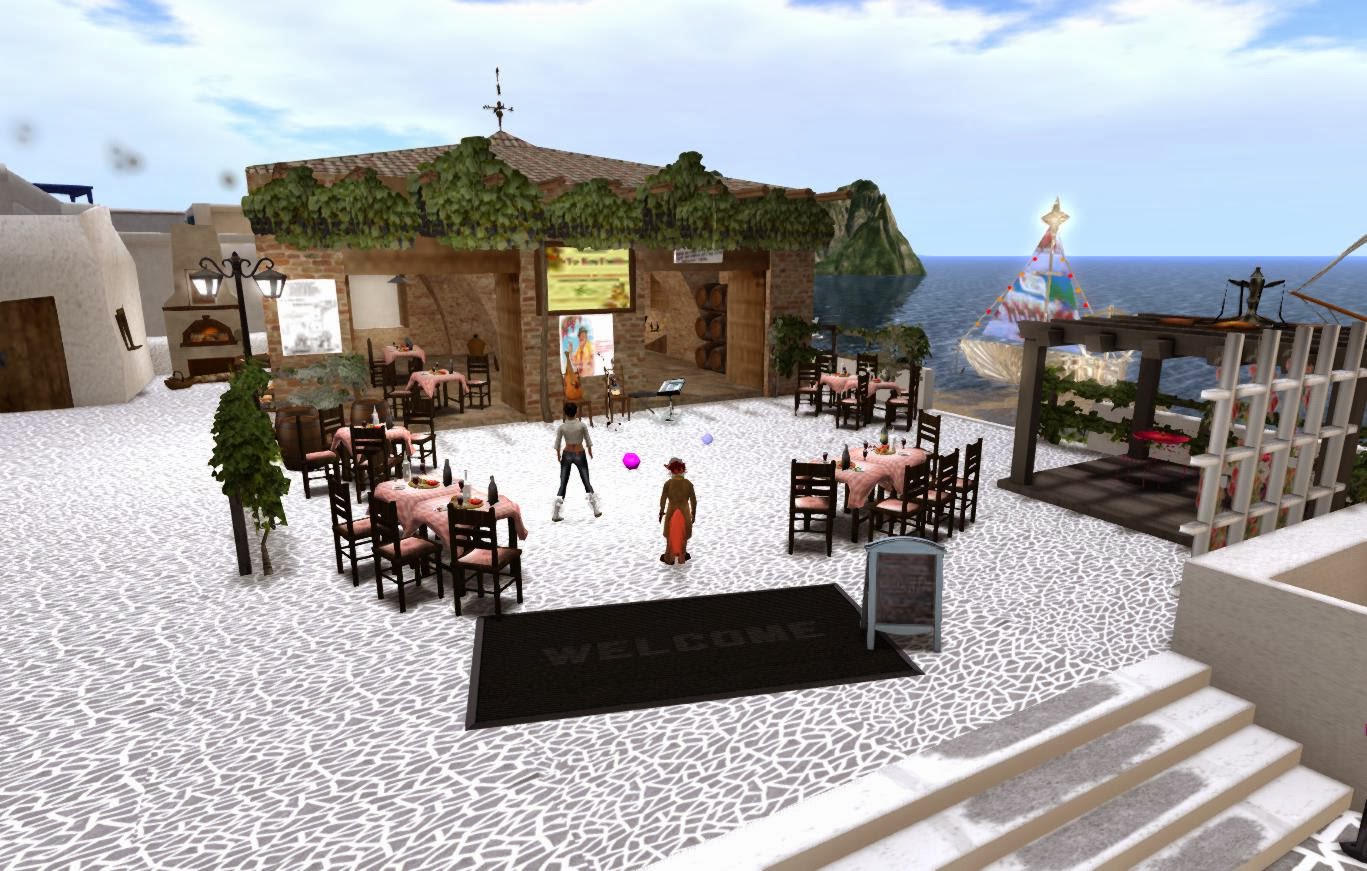 Our next stop was at a tavern near the ocean. Approaching it, we were greeted, "Welcome to KoutoukiTaverna." The building itself was used to store wine cask with most of the seating outside, reflecting that on the real life island, it doesn't rain much. There were a number of tables set up, each with some food and wine. There was a little space between them for dancing, and a small band area where people could play some instruments, a guitar, an electronic organ, and something native-looking in the middle chair. Artemis pointed to the middle one, "Bouzouki, a Greek instrument." She explained they were first made in ancient times. 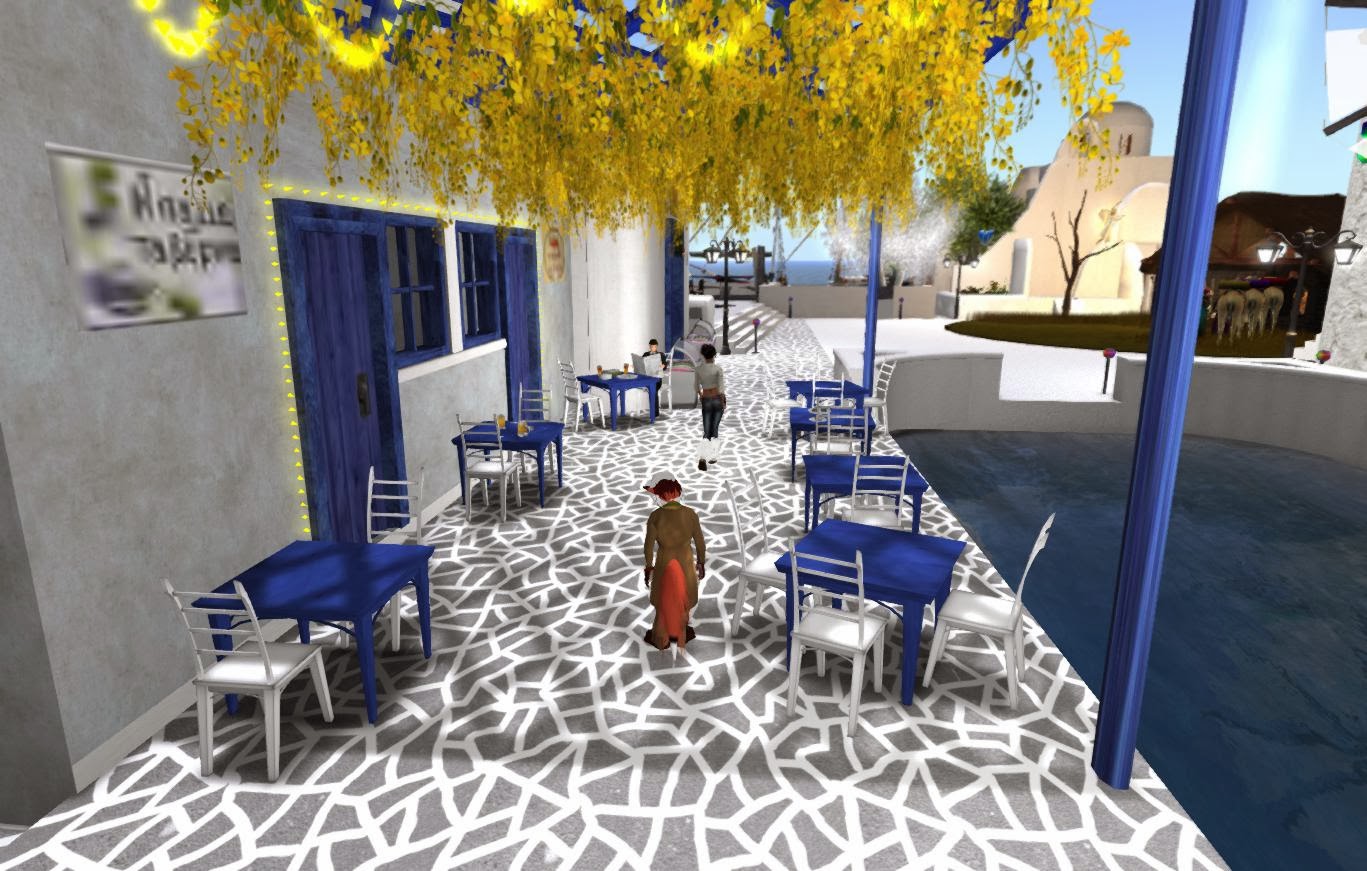 We continued to go about the town, walking down it's streets. Artemis commented, "narrow streets with bougamvilleas, all white and blue." She stated this was a common sight on Mykonos in real life, "small houses with teraces." We then came across a tiny church, "and orthodox churches all around." This was the smallest in town, probably designed to seat less than a dozen people.

Going further, we came across an arm wrestling table, then another tavern next to a creek with a recreation area with swings, a volleyball court that could keep score, an outdoor bar, and winsurfers and lounge chairs to sun oneself in.There was also a backgammon game on the beach. 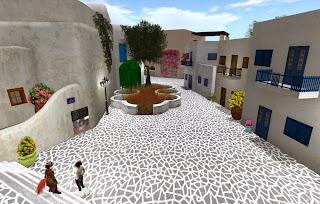 Artemis and I soon parted, but I went back later. Going about this second time, I noticed other details that added to the atmosphere of the place. There were shops, such as the ice cream place with cookies and cakes as well. There was an occasional "artificial avatar" about to keep the place from looking empty. There were also local stalls where fruits and veggies as well as meat still on the hook and a bit bloody were on display.  Across the island, the radio streams play a mix of rock and Greek music. One can be hearing a man singing in Greek one moment, and a few steps to the left be listening to "Green Day." 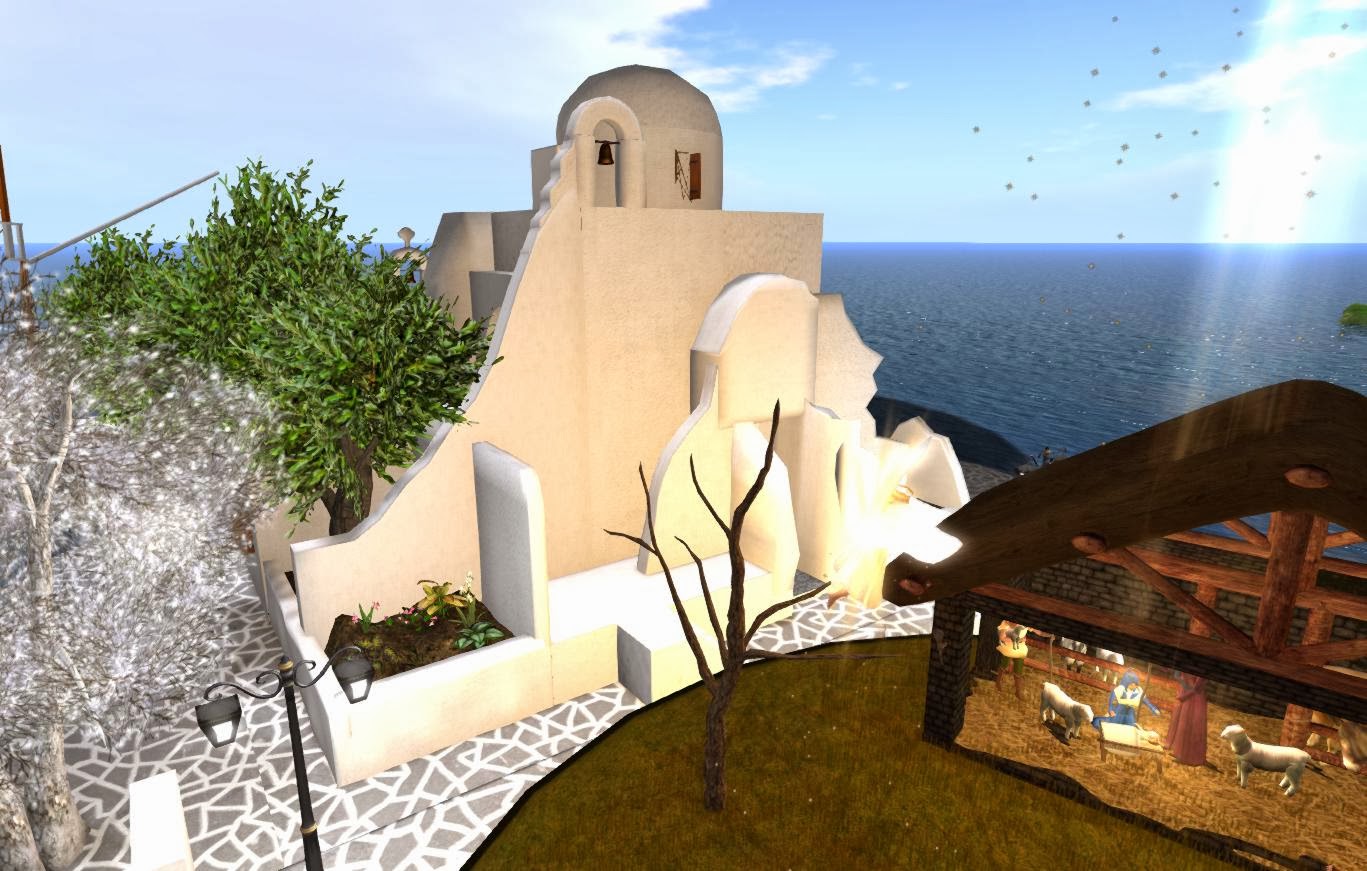 The place was well done. A nice tribute to the island it reflects. One can look up information about the real island at:  http://en.wikipedia.org/wiki/Mykonos.

"Thank you soooo much for coming here. you are welcome any time.  After all Greeks are famous for their hospitality."