I truly wish you would come inworld and see the place yourself. It's so remarkably beautiful. Its not just the house itself. Its everything around and about the entire area . In every corner you have one thing or another that you haven't seen before. Please note I'm not a writer and never will be, with the countless mistakes and grammar errors, that's me. 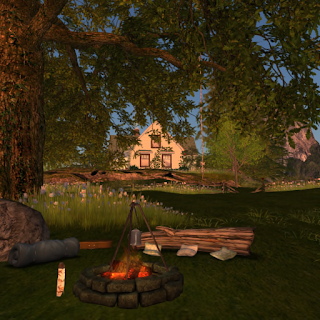 I took pictures for you, although trust me, they don't depict all of what this place looks like. I also send you the landmark inworld.  In January, Truck (truck.meredith) and Ty Tenk (tymus.tenk) who own the sims at Calas Galadhon Park, closed for the month of January for a much needed break, and re-opened the 1st of February . What I understand is that Ty Tenk (tymus.tenk) and Truck (truck.meredith) collaborate decorating and designing the sims for Calas Galadhon. Ty Tenk (tymus.tenk) is the landscaper, who I have to say does a beautiful job. I did ask him a few questions this morning on what his motivation of creating a farm on one of the sims called Glanduin in particular, he mention the motivation was a lot of idea's in his mind and that he lived in the country most of his life and that in the farm house itself there are picture of his actual ancestors . 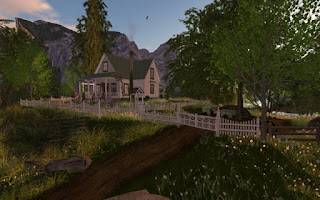 I have to say the country farm land, which I call it, it's just the most loveliest thing I have ever seen. The most picture perfect country farm house/ barn  and so on that anyone would or could imagine. I have never seen anything so detailed in Second Life before like this place. I'll give you a few examples : the rope swing in the back of the house, the seating area with an outdoor fire pit. The swing set on the side of the house and the two seating area's on the rock nearby, with full animations. The front side of the house, you see a brown fence and horses, and the fence itself animates. Some poses bring you back to childhood example standing up with your arms outstretched tip toeing across the fence back and fort. Or sitting reading a love letter while you clutch the letter to your chest in remembrance of a loved one or love one hand written letter and that is just a few animations of many. There is also a black horse click sit and there is many poses as well , how sweet. 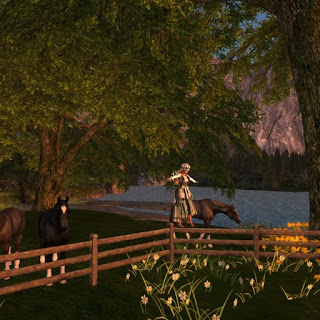 As you keep going down the hill, you have a pond with gooses and a seating area overlooking the pond then there is the barn with the animals. There is a large pig, who won first prize at some country fair I imagine, rabbits, a turkey, chickens nearby, goats, cows, a horse rezzer nearby, the sheep in the back of the house, the cats and dogs in and outside the house, the ferrets even. There's plenty of plant life, the oak trees, cherry trees, the birch trees on the exterior, the countless flowers in and around the house, and more. In fact in the front of the house, how adorable, two pose balls that is written ' get to work.' You sit on them and choose a summer hat male or female as well as a rake and your avie animates to rake. There is even a clothes line with some clothes out to dry.

If you yourself lived on a farm in real life, or knew someone that did or even spent summers at your grandparents country home or someone else' grandparents country home, if you close your eyes you will, I'm sure, remember the smell of grandmother's  baked cookies. Walk into the house it may just evoke long ago memories. You feel transported in another time where life was simpler then it is today. And the conversational pieces that may arise amongst  one another visiting Glanduin and the inevitable question that usually arise "Do you remember when ...?" I'm sure it will bring a smile upon your face.

And if you're like me who never lived on a farm, but I imagine myself as my friends told their countless stories of summer's passed with their grandparents at their country place and the memories that they recounted. And I writing vicariously through their once upon a time storie.