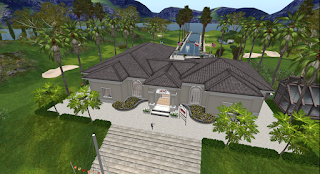 Long before becoming a reporter for the SL Newser, this bunny was hopping to the four corners of the grid, in search of the next been there done that.  A friend and I would take turns introducing the other to a new place and  activity. One of these adventures took place at a golf course. I had never tried real life golf, other than on a computer simulation, so was game to try it in SL. Turned out, I really liked it, although I couldn't explain why. Hoping to introduce our readers to this fun adventure, we searched for a golf sim, to re-learn the game and take notes on the back of the score card of the things we liked.

Our first pick was a place called the Aero Golf Club. But we soon learned of several other great clubs. From the landing, we pass through the clubhouse, noting large meeting rooms on either side. They must have some big events and tournaments here. Out on the back patio, you'll see a large pool on your right and to the left there is a kiosk, where you join the club, to be allowed to play there (free) and get a HUD and golf club.

The golf club is what they call a loner and is good for 24 hours and only at Aero. You can always get a new loner club for each time you come, or click the [?] on the HUD to learn where to buy your own, use anywhere kit, which even comes with it's own holes. 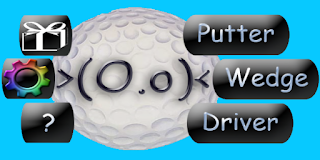 Next, we find the first tee, just a few steps from the kiosk. A large marker gives the tee number and it's par and has an arrow on top, pointed to the hole. Two small blocks mark the starting line Aim your body in the direction of the hole, then select the Driver from the HUD. This does several things to set you up to shoot. The head of the club adjusts shape, you are posed to hit the ball, a small cloud emits a tail to show direction and strength of wind and a pointer on the ground allows you to aim, using left and right arrow keys. Having  aimed in the right direction, you must now decide how hard to hit the ball. Click and hold down the left mouse button, in a clear area like the sky. As you keep it held down, a bars meter adds bars and changes color, as it reaches the maximum power level. Letting the button up allows the swing to begin and hit the ball. As the ball travels, it leaves a cool strobe light trail, which remains as you approach it. To get you to the ball's exact location, a large ball marker hovers above it. When you are close enough to click the marker, it will TP you to the ball. From this position, we follow the same steps as before, facing the direction of the hole, picking a club from the HUD, aiming and hitting. After you sink your putt in the hole, a look around the perimeter of the green will find the arrow that points to the next tee. 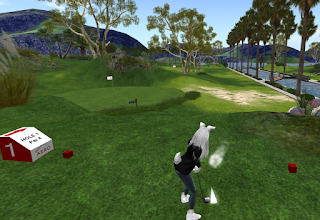 The HUD and club are simple to use and, after only a few holes, you begin to get pretty good at using them. Playing golf at Aero  is way better than a mere golf simulator, for several reasons.  The sim is a beautiful park-like setting, with a very enjoyable music stream. You can't help but find yourself thinking that this would be a great place to bring a friend or date. There are several places for small gatherings, like  a gazebo and the beach.


On my last visit to gather a few last details and pics, my radar picked up an avatar moving about the sim. Moving to their location, there was nobody to see. Then she welcomed me to which the reply was "Hi invisible lady". We worked out that a glitch in my viewer was keeping her from rezzing, while she could see me and my Newser Reporter tag. She told me about the golf world, in SL. I followed her as she finished her last few holes, although she was invisible, by following the bouncing ball. When her round was finished, she took me to two more golf sims and I could see her in those. We quickly looked around Hazeltine Golf course, then went to Claremont Pines to meet Ben Sauber, a top competitor on the circuit. My hostess qlued me that they use voice, when playing, so I turned it on. Having only recently upgraded to voice, I was amazed at how much the added dimension increased the fun.


We highly recommend golf, in SL. My good friend, Doc Philly, liked it so much, he went out and bought his own set of clubs. Perhaps you'll catch him there, shooting some rounds.