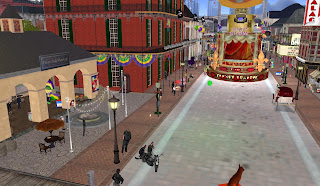 Team Fox is getting a touch of "The Big Easy." As February approaches, the Creations for Parkinson's sim now has a "Mardi Gras" area, complete with a street parade.

Grab your Krewe and head on down to New Orleans. FrannyDJ Dean brings the French Quarter to life. Ride 100 interactive floats in this spectacular parade. Dance to live music and get crowned King or Queen at the Hot Clubs on Bourbon Street. Don't miss the thrilling carnival rides.The party never stops. Have the time of your life while helping to find a cure for Parkinsons. 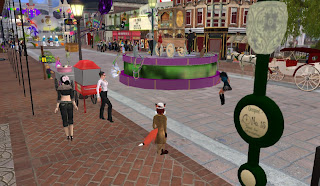 Teleporting to the place, I appeared in a small welcome center building beside the parade street. There was a display of food on one side, and on the other masks one could pick up. There was also a bead thrower available to take. From there, it was just a short talk to the street, where one could see the floats passing. Many, if not most, had their own music playing from them. People could also hop on and dance on them, becoming part of the parade. In a few places, there were also cubic kiosks with a fox on top, where one could donate Lindens to Team Fox for Parkinson's research. 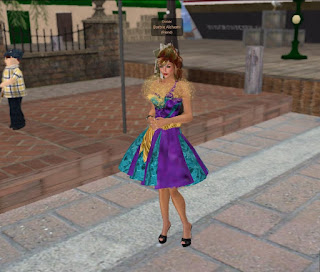 There were a number of avatars watching the parade, or taking part, when I arrived. Among those watching was Barbie Alchemi, the owner of the sim and the head of Team Fox. She told me this was the third year the Mardi Grads parade was here, and some of the floats were reproductions of originals from the parades in New Orleans a century ago. Each float's music was chosen to go with it's particular theme.

A notecard I found stated that there were over 90 different floats, balloons, and other items in the parade here, and they took an hour and a half to go down the street before starting all over. More would be added as time goes on up until Fat Tuesday on February 9. It was also recommended people keep their scripts down to avoid lag, and that AOs might interfere with riding the floats. 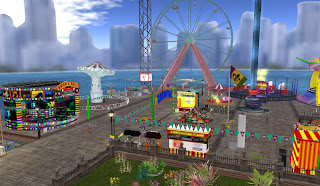 Besides the parade, there was also a carnival ride area in the "Croc Docks" where one could get on the rides and enjoy other attractions there. Nearby was a restarunt, "The Bistro," which offered food and dancing. Near the parade start was "The Crazy Leprechaun Pub."

Once again, all donations made to the parade kiosks go to fund Parkinson's research. The parade will be up until at least Ash Wednesday, possibly for a day or two longer..

Posted by Bixyl Shuftan at 7:00 AM