Over the last few years, we have written many articles about great adventures to sims that are fun to explore. The stories are written from the perspective of a person, going there for the first time and what fun can be found there. Since most of the research was done between midnight and six a.m., there were seldom any avs to question, as to the back story of how the sim came to be.  We usually give the impression that the reader can follow in our footsteps and have the same adventure and fun. Where this story of sim development goes, few readers can follow. The opportunities to remodel an entire sim are rare and the politics involved are more than most would dare to get involved in. Still, it is a story worth telling. 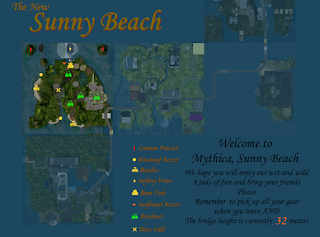 My story began weeks ago, when an old sim mate began asking my help to arbitrate a dispute on the sim he now lived on. Both I and Dr. Philly counseled that, although we cannot force others to comply with our imagined futures, we can place a better picture in our mind, where everybody lives happily ever after and let nature build it for us. It was pointed out that there are large areas on Sunweaver Bay, as well as a whole homestead sim, near by, if he should desire to move. Long story, mercifully shortened, we learn that our friend, Erik Mouse, has retained some of his lots, while also renting all of Sunny Beach sim. I was asked to assist in shaping the sim to fit his imagination. Having some experience in sim design, the idea of designing and building a whole sim had "Sha Adventure" written all over it. 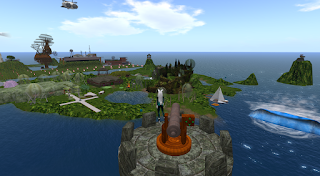 My first orders were to reduce the land area to an island in the middle of the sim. It was suggested that extending a corner of the isle, to keep it connected to the trolley, would open the possibility of having a public beach, to honor the sim name, so that land was left connected. Since we both liked the idea of a central waterfall, I began making some sketches. Selecting what had previously been a duck pond as the bottom of a waterfall, a stream was dug to the southern beach area, giving the island an inverted U shape. Now, the same amount of area has greater length than width, by being folded. The effect is enhanced by adding a backbone ridge of hills, which hosts three waterfalls, one of which has a secret room. While we were still in our Hillbuildy mode, three towering hills got raised. I'm kinda proud of my "Fiddly Bits." The view from each tower is fantastic. The South Tower has a gazebo to chill in, while the North Towers each have a cannon fortification, with working cannons. With a little practice, Doc Philly got to where he could bounce a cannonball off my hat. The balls do not cause any harm, unless they hit objects with scripts allowing harm. Perhaps we can host some ship sinking contest events, in the future.
As the island took shape, three mesh beaches were placed and wind surfboard rezzers near each. The two beach sections on the South side are "Sunny Beach". There is a raised platform, tiki hut club, for beach gatherings.  On the West side, we find "Sunset Beach." Several incarnations previously, this sim featured a surfing wave. I often went there to try improving my skill, but sometimes would just sit on the beach, contemplating, to the sound of the crashing waves. A search on the Marketplace turned up a similar wave generator that would just fit the water area on the North side of the island. The wave was expensive and could not be copied or transferred. Having seen the sim owned by several, over the years, I was hesitant about gifting a wave to an owner, but if I owned it myself I could always keep it set up on any sim that was willing to host it. After several adjustments for position and depth, it began sporadically putting out waves. A notice, at the top of my viewer, indicated that the sim needed to be re-baked and some things might not operate correctly meanwhile. Shortly after, Rita showed up and restarted the sim. After that, the wave reached full functioning. 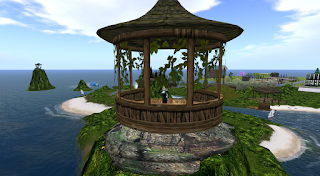 A surfboard rezzer sits on the shore, near the boat docks. It takes a bit of practice, but you'll be doing tricks in no time. If you fly up to it, just above water level, the wave will face you in it's direction and push you ahead of it, in the air. The water area, all around the island, has been made wide and deep enough to allow for motor and sail boats. Because of bridge height, masts must be under 32m or be set to phantom. There is a LL freebie sailboat that is the ideal size. Travel around the island, by boat or foot is a treat. Erik and Lilly love when I take them on boat rides. I enjoy walking around in "mouselook". The whole sim has a very natural look to it, at ground level. If you fly up 150m and look down, the island looks like a giant koi fish, in a lilly pond.  As if all this beauty and beach fun wasn't enough, the owners have also placed a Stargate on the isle. Sunny Beach is a stepping stone to many new adventures.

Although the adventure of designing and building a great sim was unique, the new Sunny Beach is now an adventure that the whole community can share. I hope many will join me, in being a friend of Erik and Lilly.