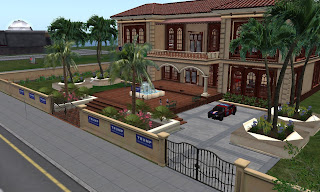 In real life news, one of the biggest stories is the campaign of billionaire and media personality Donald Trump for the nomination for the office of the President of the United States. Despite his complete lack of experience of any political office, or perhaps because of it, he catapulted into the lead in the polls, and then the delegate count. While he has been lambasted by many, he continues to enjoy the support of millions.

In Second Life, a few of Trump's supporters have made their presence known. Last fall, two Trump-themed locations were set up. Late last month, I heard about a "Trump Manor." After heading to Lionheart Ahadi where it was and talking a look, I contacted the owner, a JP Laszlo. She called herself a supporter of Trump for President, "and I run a humorous satirical political page to that effect entitled 'Donald Trump Thinks Your Waifu Is S**t' with over 6 thousand followers on Facebook," where she had posted some pictures of the place there, "We had wanted to do something political in Second Life for the election." Asking about the page's name, she explained, "It's just an anime in-joke about somebody's favorite female anime character, their crush, being s**t. Trump supporters on the political board of the image board 4chan started posting pics of anime girls in 'Make America Great Again' hats, and it sort of became a meme." 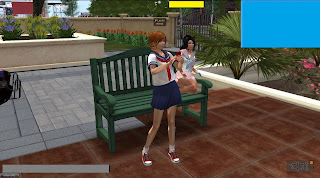 JP explained the Manor was based on the Mar-A-Lago house in Palm Beach Florida, which Trump owns, "I was going to rename the parcel Mira Largo ... all people seem to do nowadays is hang out here. ... Furries, lots of furries, I don't know why furries like Trump but a lot seem to." She had built the club, "a couple of months ago. The inspiration came from my return to Second Life. I have been off and on, but haven't had land for some years now, until my friend the estate manager here sold me this plot. I went shopping for a house and saw this villa. I had to have it. It was 6k Lindens, which isn't the most expensive house I've ever bought, but it is just right for a plot this size. I said to my friend, 'Well I have a house in Second Life again, and we have an election going on. How about a lawn sign?' One thing lead to another. Now I have about eight of the things, two flag poles, and a Trump themed patrol car (laughter)." Besides the American flag, the flag of Ireland also flies at the Trump Manoe. JP explained, "I am of Irish heritage (smile)." 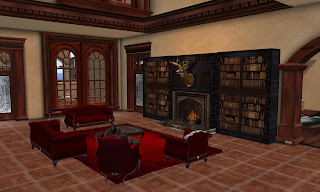 JP had to add my name to a security system, which had gotten the attention of Hamlet Au when he entered the place. When I brought up his article, she reminded me the place was not a truly public area, but a private location she invited friends and certain others to, but didn't want harassment on them or her, "we've had some issues with various miscreant protesters. Eh, it's just like real life? ... but seriously, we've had griefers here, and even people just poking around without permission because of the Trump signs. First and foremost, this is my private residence for my two avatars. And having people wandering in, as is the nature of living on an open sim, the orb is needed." 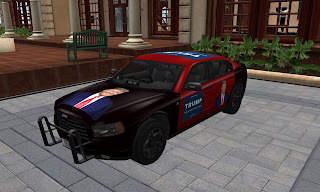 She felt in some ways, the griefers were a reflection of how some were treating Trump's campaign for office in real life, "I also find that Trump has been misrepresented and quoted out of context so much, that its now acceptable for leftists to say things like 'Donald Trump is a racist,' and people just nod like sheep without actually looking into it. Trump has not said a single racist thing. All he has said is we need a border wall (and) the people who are getting over there by and large are not the sort of people we want, drugs, criminals of various flavors, and he has stated that refugee status should not be given to Muslims until we know a way to vet people properly before they come into the country. That is not racism. That is common sense. Being against illegal immigration is not racist. Trump loves Latinos. Just not illegals. There are proper ways to legally enter the country and do things right. Entering illegal degrades the people who enter correctly." 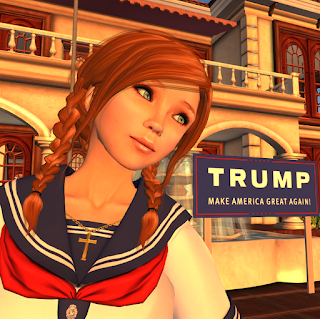 Of her plans for the future, "Things will move forward and we are going to set up a campaign HQ." JP stated she had some spare land. " ... We are going to put an auditorium or a stadium, we haven't decided, we are looking at builds. ... I'm reaching out to people for the spring/summer so we can campaign here in Second Life for Trump, and if they want to contact me just to send me a message. It's gonna be a busy year. (smile)"

So according to JP, there should be one more Trump-themed build in the near future, this time a public campaign HQ. No doubt it will be the subject of conversation as the candidate remains in the lead in delegates for the Republic nomination. How much the real-life election makes it's way into Second Life remains to be seen.

Addition: Later on, this article would be referenced by New World Notes , Kotaku., and Cheezburger.com.