During our time as a Newser Reporter, we have explored many areas of the Second Life Grid. Our writing style was strongly influenced by a movie seen in childhood. Bambi's friend, Thumper, was told, by his mom, "If you can't find anything nice to say about somebody, don't say anything at all." When we hear of a possible location to write about, our first trip there is a short visit, to get an intuitive feeling of the land and it's residents. Intuition is hard to put into words, but within a half hour one of two thoughts will enter our mind. It's either, "I can't wait to tell readers about this adventure," or "there's no story here." 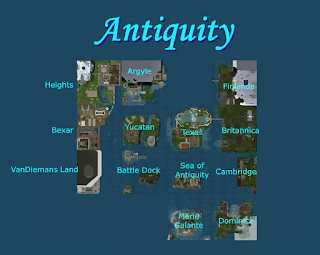 If you were to put all of the sims in the grid together, it would form a square of 610 square miles. By comparison, a single sim is only about .39 sq.mi. and there are currently 24229 active sims on the grid. So, how does this reporter find these small areas that are fun adventures, in such a big world? Newser staff meets once a month and the Editor, Bixyl Shuften, usually provides leads to potential sims. Another source is the Destination Guide, but this can be hit or miss when looking for a fun place, and Sha has frequently wondered how much the sim owner had to pay to get a mention in the guide. One of our favorite search techniques is to open the World Map and pan and zoom around the grid. We look for sim clusters which suggest community minded residents. The layout of the terrain, streets and buildings will give us an idea of the level of the ideal and practical skills that have developed in these communities.

Studying the map, we found a 13 sim cluster. Each of the sim names began with "Antiquity" and there were massive buildings on many of them. We knew, before ever setting foot there, this would be a Great Adventure. 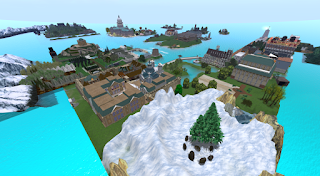 We select an open field on the North Western sim. The landing puts us at the foot of Mount St. Bruno, so we climb to the top for a better view of the country to be explored. There is a gathering spot on the top of the mountain; a clue that the natives might be friendly. From up here, it is clear that it will require several visits just to get a look at everything, so we start walking South, with plans of zig-zagging through all 13 sims.
As our exploration began, we notice there is another person about 2000 meters up, showing up on radar. Minutes later, this same individual sent an instant-message, which was very unusual. She said that she had seen our name on her radar and it seemed to be a name that she was familiar with. After thinking a bit, she recalled that it was the name of her favorite Newser Reporter, who had inspired her to go on many new adventures of her own. We continued chatting, while taking notes in the buildings that Sha was inspecting. Then the message sender informed us that she was a local resident, named Cosette Rouages, who's job was to write scripts, used in the builds. She was very excited that her favorite reporter was there to do an article about Antiquity. After a bit more chat, she invited us for a look at "the other half" of Antiquity.
It turns out, at the 2000m altitude, the sky platforms cover the entire 13 sims. A TP up and we spent hours talking and becoming friends. She also wanted to arrange for a private tour, with the owner of all the sims, Jacon Cortes de Bexar. Both of us live in the same real-life time zone and as 4:30 am rolled around, we agreed to meet again, soon. It would be necessary to return several more times, to take in all there is to see and do.
There hadn't been many notes or pictures taken, on the first visit, but that is par for the course.  The plan now was to attend an event at Cutlass and head back to Antiquity after. As we came on line to prepare for the evening's events, there was already an IM waiting to be read. This time, it was from the owner, Jacon Bexar. Cosette had told him all about our meeting and he wanted me to come for a private tour. As soon as my event was over, we headed back to our original LM  in Antiquity. After landing, Cosette appeared on radar, at ground level, standing in a small group.  The welcome committee was made up of Jacon, Cosette and two other Ladies. 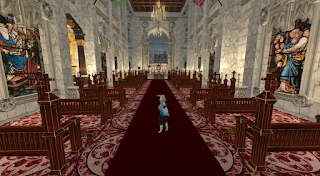 After introductions and other pleasantries, Jacon would TP the group to his latest master build, a scale replica of Buckingham Palace. To date, this build has taken three and a half years and even every texture is from the real palace. Through out the tour, there are easels set up, with photos of the original. Jacon says, be sure to look up at the ceilings in each room. Each is a unique work of art. We told Jacon that the most difficult part about writing an article on Antiquity would be to avoid starting every sentence with OMG or WOW. When our readers visit Antiquity for themselves, they can wear out their own list of expletives. 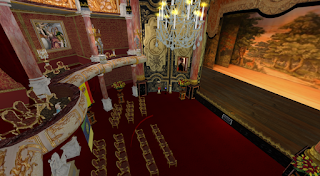 Back at ground level, I traveled to all the sims and took lots of pictures. Since this is an article and not a book, it will include some photos and brief comments. If space is limited for the article, the full length original and all the photos can be found at shaadventures.blogspot.com
The Antiquity Cathedral made me a bit nervous, because there is an autobot (the sim's name for bots that respond to you, not the cartoon robots) cardinal at the altar and he kept turning in her direction. I eventually got the courage to stand in front of him and explain, to the empty pews, her theory that god is a cyclops.
In the Royal Antiquity Theater, I took a seat in the balcony. I wonder if it would be giving my age away, if I said, as kids we went to movies in theaters as fancy as this one. 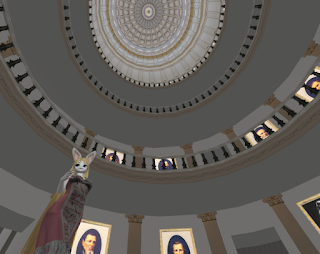 One shop sold a collection of "autobots," in period clothing. Many have a menu. I was tempted to go back and buy a maid that offers a glass of wine and a list of other services.
A harbor in the Argyle sim could be your next SL job, if ye be Pirate Friendly. Arrrrr!
Standing under the dome of the Texas State capital building, I recalled seeing a movie with Burt Reynolds standing in the same spot.
I paused in a Texas one room school house, brushing up on Texas history and spitball making.
There are groups to join, like for Export Import Co., a pirate group and an Equine group. On the Marie Galante sim, there is even a large area for Merfolk. 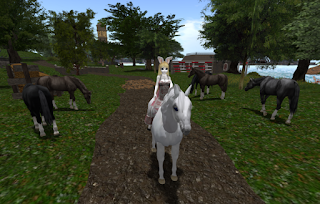 I rode my own horse on the trails that cover several of the Eastern sims. I have an AKK horse and now have a great place to take him on walks.
They have monthly horse events, like cross-country, fox hunt and chariot racing.


Having made videos in Second Life, I couldn't help but notice, everywhere I went, the beautiful scenery all looked like perfect backgrounds for new SL videos. I loved the various music streams that are encountered. They were soothing and energizing. The few highlight given above are less than half of the list of noteworthy places. By all means, Antiquity goes on my list of "Must See" locations.
We bid ye to have a Great Adventure in Antiquity,
Sha
Posted by Bixyl Shuftan at 6:00 AM