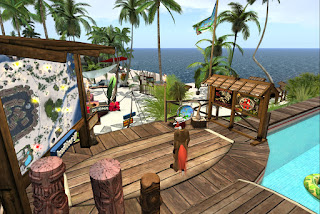 I was asked by a couple friends to check out "Furry Tiki Island," a sim made like a Pacific resort island. Getting there at the landmark I was handed, I was in a welcome area made like an open-air wood structure with a few tribal carvings, and a sign greeting me "Aloha" in front of me. The music stream played Hawaiian tunes. Behind me was a pool area with floats, and a thatched roof hangout people could relax in. Next to me was a map showing the various locations on the island. Seven were named, The Mall, Waterfall, Pirate Sanctuary, Shark Bites and Bar, Sex Beach, Main Beach, Club Erotica, and Club Bounce. Besides the welcome area, there was an above-water villiage in the northeast that was unnamed. 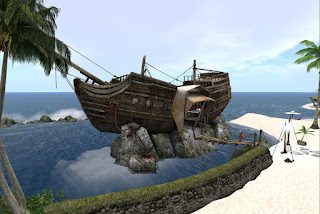 Going around clockwise, I saw the mall only had a few stores in it, all small thatched roof to match the decor of the location. But perhaps this was from the place being relatively new. The Pirate Sanctuary was an old wooden frigate on the rocks that had been converted into a hangout with couches and chairs to sit in and drinks to sample. Going to the "Sex Beach," there was a guy and a girl there, but they weren't being intimate but just playing around on the sand in a "clean" way, save that the guy was nude, "I'm not usually naked, she forced me to." "You listened, that's worse." Almost as if on cue, the music stream started playing "Friendly Pressure." Talking to them, they told me only recently had this particular part of the island been made a place where intimacy was allowed. Besides the beach towels, there were surfboard racks and what looked like a small bar. 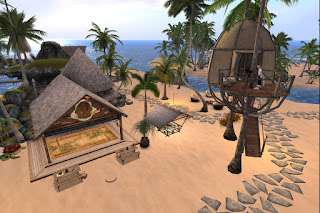 Club Erotic was just a simple place, an octagonal wooden floor weathered a bit by the tropical air with a DJ booth in the back and a canopy overhead. The unnamed village had more detail, with a central seating area for meeting up and relaxing, a 7Seas fishing spot, and a canoe for anyone who wanted to sail around. Nearby were a couple of caught trophy fish one could pose next to for a screenshot. The Shark Bites and Bar had a number of fruits and sweet foods one could sample, or just admire and imagine tasting them. The place had a set of shark jaws over the entrance, and a trophy with the tail end of a shark. 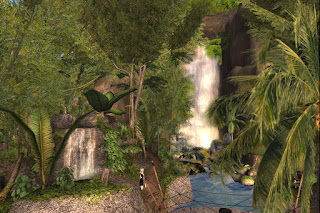 On my way to the Waterfall, over a stick bridge, I saw a few butterflies flying around. The place was detailed and picturesque, once everything rezzed, a smaller waterfall near the larger one flowing down from a presumably dead volcano. Some steps to the left led to a cave behind the waterfall with a pillow for a couple. The Main Beach was more detailed than the Sex Beach, with waves lapping at the shore, a bar, a grill, a hot tub, tubes in the water one could float on, and of course the beach towels. 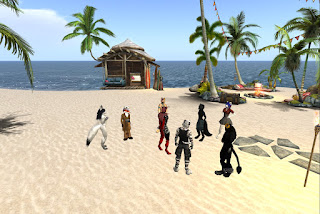 Just west of the Main Beach, and east of the entrance, was Club Bounce, which was where the most people were on the island. Getting there, I saw several people, including Vatra (Shadowulf Umia), a black anthro lion with a crown whom later put it down and slipped on a grass tribal outfit. When I asked him what gave him the idea to make the place, he answered, "Always wanted a tiki bar of my own as I love those type of places. Over time, the love for tiki expanded and so did this place. (It) started as a small parcel just for friends, then expanding to a larger parcel over time. Now I see this place as something different, (a) different theme than most furry sims and hangouts, but with opportunities available." I asked him what opportunities, and Vatra answered, "we encourage and help those new to djing, security, management roles and so on. We also promote new merchants and help them get their foot in on selling their stuff. So both new and experienced can enjoy Second Life and the opportunity they have. We are also very active and all staff are approachable as they have been selected personally by me for their friendly nature." 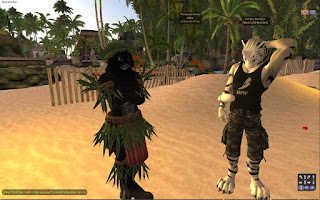 Of the helping DJs and merchants, Vatra told me the place does "by promoting for the stores and will also be offering discounts along the way to encourage buyers/ (It's) not set up yet, but I am hoping to set up a DJ school here too. ... (The) DJ school will help you by suggesting DJ software and how to bring it to stream through SL. (We) will also teach you key skills on DJing. ... We teach DJs, then they are offered to work here as their stepping stone to professional SL DJing. ... We have a few DJs interested in working here." When someone else asked who would teach them, Vatra explained it would be the managers. 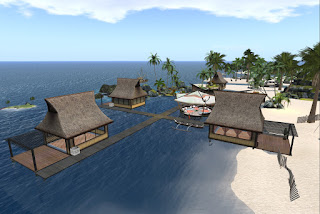 Vatra also stated the place was also offering housing, and would soon have more stores at the mall, including furry avatar makers (with more coming each weekend." He went on to say, "We also have a lot of playable board games and so on for those wanting to enjoy those on their own or as a group like Greedy greedy, Battleships, Cards against Humanity and pool."

The black lion concluded, "We welcome everyone within Second Life's legal age and so on. We encourage those interested in being a part of the Island as staff to drop us a application.  There are many areas for loved ones to embrace around the island, but hope everyone enjoys their time and share with us their best moments."

Others nearby were also happy with the island, one saying, "it's a nice place to hang out, relax, meet new people, explore new wonders."