It was four years ago in 2013 when I first wrote about Africa Live in the Estings sim. Today, the sim and community are still around, although there have been a few changes over the years. I was recently invited back to see what's changed and what hasn't. 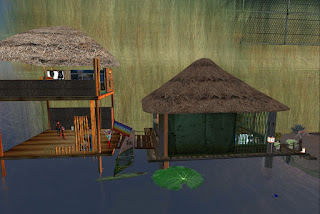 I was welcomed back by Hobbi (Joanne Kimono), "Glad to see you again after all these years. ... I want to show you the breadth and depth of Africa Live so your readers will feel welcome to all of this place." She pointed to some wood buildings with thatch roofs over the water, "As you see across the water is blue shacks that is ecology area. ... This is TerreDarmoise African Nature Refuge. Beside us is the open water ... making a very place to tour SL on a boat." One could boat around on the water, or take the "Aero-Putter" flyer, a basket with a couple balloons and motors, which was still around from last time. There was plenty of nature scenery around, that of a river area, with some prim animals around, such as elephants and hippos. 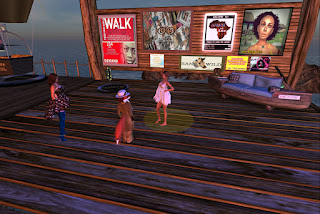 Hobbi would introduce me to CarryLee, whom I'd met here before, "CarryLee made my dress and her group FAFA  has offered as a group gift," going on to say her designs have improved over time. Hobbi mentioned another store owned by  Analeee Balut, "Analee Balut  made my boots." CarryLee herself told me the place has had, "many changes, but the idea is still the same. It's only the looks that has changed a bit. Oh, and we have the stores." Her FAFA was just one of a number of shops there. CarryLee told me later on, "We try to get only shops that offer African fashion, but thats not easy." 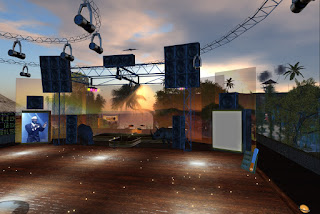 We happened to be around at the time of dawn, Hobbi telling me, "Look! The sunrise is beautiful! ... The sun here on water is a great advantage here on a water based village." Besides the regular boats to get around, "you can sail under, all the stilts you can pass trough," Hobbi told me there was also a speedboat rezzer, "there are also wind surf sails rezzers." CarryLee commented, "and the duckee bumper very fun (giggle)."

Next to the shops, there was also an open area club and dance floor, owned by Bafana Beaumont. Hobbi told me the club's normal events are, "Saturday, sometimes Monday and then the weekly reggae event Thursdays. Recently there was a Sunsplash Reggae event and ongoing reggae and dance." 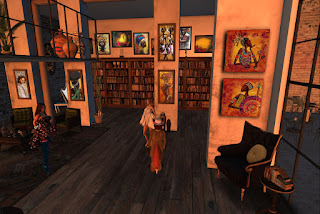 Near the old entrance high above the sim, which could be accesed through the teleporter and  had a permanent sunrise over a savana, there was a gallery area with pictures of Africans and other peoples, "very beautiful photos in my opinion," CarryLee thought. Next to it was what CarryLee called "the little jazz bar," which had a couple of drums people could play. Some events, such as poetry readings, take place there. The teleporter could also take people to a couple other places high above the sim. One was a small library area, with various paintings. Some looked like they were done in traditional African style, but there was one that reminded me of a American WW2 "Rosie the Rivetter" picture.

I asked if a number of Africa Live were still French speakers. CarryLee told me, "There are still many French coming here. But we do our best to keep English as main language." Bafana was among those whose first language was French. Another was Frederic Herberle, "Frederic has poetry here ... All cultural events are welcome, art, music, poetry." 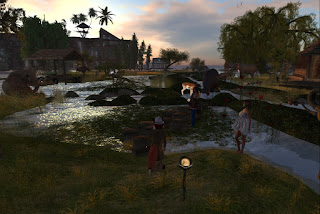 Another question of mine was if any of the visitors here had misconceptions about Africa. CarryLee answered, "I meet a few here, but it's rare ... ask about the wetlands, since many do see Africa only as dry savana. ... The main idea is to bring people away from the negative impressions they get from the media. ... they show us the bad news yes, and that's ok and understandable. But it does make an impression." Hobbi felt, "Perhaps because Africa is a large continent of people that is an issue.  People for example in Nigeria are not having crisises too much. There are places where people live well and others where crisis does prevail at this time."

CarryLee stated, "My point was, we want to bring people the beauty of Africa. There is so much! What I want SL readers to know is this is a safe and welcome open arms place to travel and have fun." 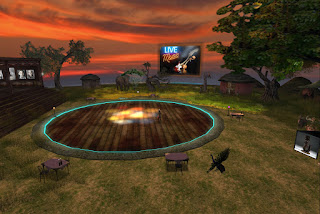 I was told currently the number in the Africa Live group was close to 2000, and this year the community turns ten years old.

For those interested in meeting up with people in other parts of the world, especially Africa, Africa Life is an interesting place to visit.