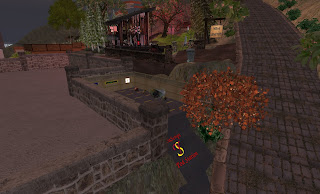 Last week, a new pod station was activated on the Northwest side of the mainland continent of Heterocera. These tour vehicles are found on all the mainland continents and are one of their most exciting features. Pod vehicles ply the roads, railways and waterways, chatting local information and pointing out landmarks to their riders and they are a great way to explore the grid. They can be rezzed at specific stations or an avatar can just hop into one as it passes.

Yavanna Llanfair works tirelessly maintaining the pod routes and adding new tours, and this is just the latest update to the system. Yavanna says, "I believe that mainland should be enjoyed and appreciated. Yet there is so little on mainland as a whole which attracts people, simply because they don't know about it. Most people don't travel around and look to see what is there; they go from
landmark to landmark in their inventory, without taking the time to look around them. Yet mainland has so much going for it; beautiful areas, historic locations, educational establishments, rail and sea
transport, which most people probably don't know exist. Mainland should be alive, it should be a community. We should all care about it, and then maybe we would take more pride in it and in our
buildings." 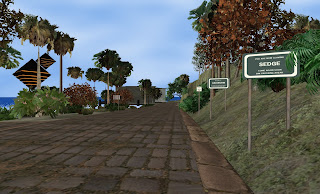 The new station at Sedge provides a halt and a rezzing place for pods H3, H6 and H7, which all pass through this region on Route 2. An announcement to the podrider's group also suggested the possibility that H4 may divert this way in the future, too. Pod stations are established on parcels willingly shared by other pod enthusiasts and this one exists thanks to Taraa Destiny, who recently acquired the land. Sedge is a lively corner of Heterocera, with much to see locally. The station lies below the Sedge Graveyard.

Klaus Bereznyak
Posted by Bixyl Shuftan at 6:00 AM