I stopped by the cafe on Trotsdale at (32/214/24) to talk with the owner, Skye Wishbringer. When I asked him about his role in the Cafe, he replied, “Sole proprietor and owner of Stagbucks Coffee! There are many others who spend some time there, but my main purpose is keeping it running.” 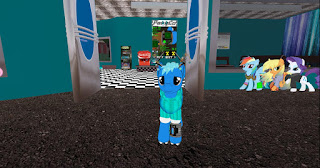 I asked Skye  about the history of the cafe, he said, “Oh, that's a long, long, long ago story. In its existence on Second Life, I can't remember the original date in its original iteration, but the earliest version I can remember of it on SL goes back to some time around 2005 or 2006. This particular version has been around since around 2016. This wasn't its original location here in Trotsdale, either. It used to be up the street and around the corner near the Theater, in a completely different building. Stagbucks' original existence actually came to being on a text-based Muck called FurryMuck back around the late 90's. I think around 1997 or so. It's still there, if you know where to find it. When I brought it here, it started life as a small wooden shack with a coffee percolator and was generally just a place for some friends and myself to hang out. Multiple revisions later, here we are.”

The best feature of the Cafe, according to Skye, is the look.,“When you come to Trotsdale, one of the first things you may notice is the colors of the sim in general. I've always been a fan of Googie Style architecture, and amidst all the browns and greens, the teal appearance isn't contrasting but I feel complements the square and surrounding buildings near it. Every time I see it, it makes me feel happy, regardless of my mood.” 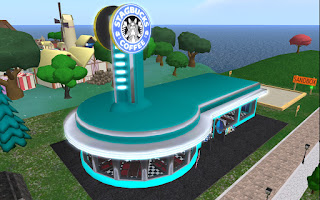 I asked Skye about which drink would he recommended, he responded. “Well, the coffee, of course! Stagbucks sells the best coffee you can find anywhere. They even come in their own self-contained cups! Coffee is, of course free. If you want to stick around for a while and hot drinks aren't your thing, we also serve fresh and cold Sparkle Cola, right from the fountain. Three different flavors! They're also free.”

Before I had to go, Skye told me something. “Of course! We also recently opened a location in the Saddlewood Sim. There's a landmark oval by the door that should give you one there.” 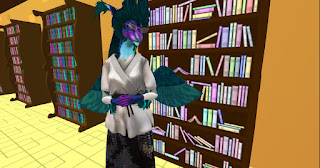 I went to the library and met the librarian, Amehana Arashi (Amehana Ishtari). After I apologized for being late. my first question was when the library first opened. She replied,
“I am not sure when the library first opened. I am the third curator. I know it was open before the RP event of Trotsdale's destruction in one timeline and rebirth in another. I -think- 2012, but Zepdek Resident is the original curator and my current co-curator. He'd have the early history.” 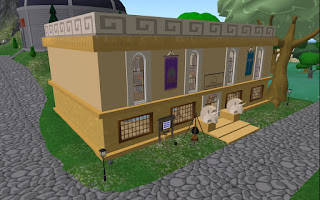 I asked Amehana  to tell me in her words about the library. “We provide music appreciation and story time," she replied, "Some of our readers do live voice readings. Others stream readings that they have prerecorded and sometimes I'll play something from librivox. We also have a few inworld titles. We network with a few other libraries and sometimes run writing contests that are open to the public. Raglanshire's library currently has one of their prim books out on the table, which I rotate with others they've sent.”

I had one last question for Amehana, that of what was her favorite part of her job. “That is a hard one," she told me as she thought about her answer, "My favorite part as a patron is listening when Illya Leonov streams his stories. My favorite part as a librarian though is finding titles I think patrons would enjoy hearing me read.”

I thanked Amehana before I left the library. I really do like the place.