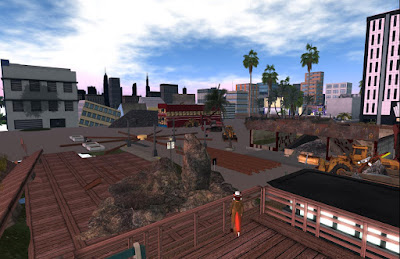 A few weeks after the disaster that wrecked the southeast corner of Montecito Bay, the affected area is getting closer to being back to normal. The majority of the rubble has been cleaned up, and the rebuilding will presumably begin shortly. 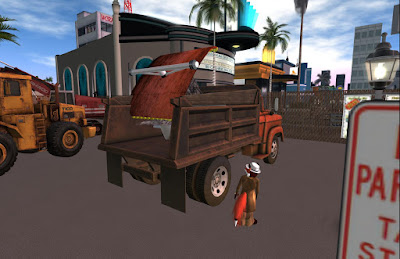 The cause of the disaster remains unclear, and other than what appeared to be a photograph with a flying saucer in the corner, no other evidence has been forthcoming. The city will only say investigations are continuing. 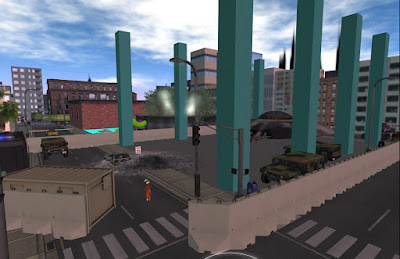 But it's not just in the southeast that the repairs are being done. A look at the Oceanside Galleria building where in December a strange saucer-shaped craft crashed showed it had been torn down and the steel skeleton for a new building going up. The saucer was on the ground. Although there were still surveillance vehicles around, the first time I dropped by, there didn't seem to be anyone around. On lunch break perhaps? 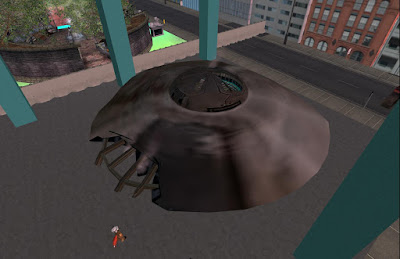 I got closer to the strange craft, and there didn't seem to be any sign of a cockpit on the damage craft. Either it had been removed, or the craft was a drone of some kind. If the later, was it some kind of military experiment, or something else? 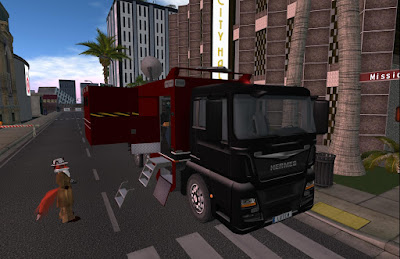 I took a quick peek inside one of the surveillance vehicles in which the door was left open. But there was no information out in the open and the computers were locked. There was still some rubble that was around the building, but I didn't pay much attention to it, at first. 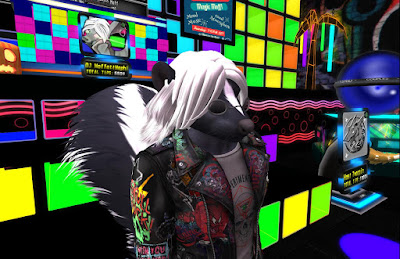 Taking a few pictures, and showing them to local resident Moff, he thanked me, saying this was more than the authorities investigating the craft were telling him. Gin Ghostraven, who was nearby, told me he got close enough to take some pictures. He showed me a picture of the rubble from a different angle, and there was a car with what looked like a hand sticking out. What looked a little like a body could be seen inside. Curious, I went back for a closer look. 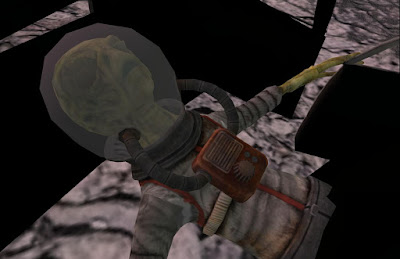 The result was the most startling thing I'd seen in my Montecito Bay investigations since the slime monsters. Inside the wrecked car was what looked like a body all right. But it was neither human or furry. It was a bald, green-skinned humanoid in a space suit with three fingers per hand. But this time, the place wasn't quite empty as I thought I heard shouts to get away. Deciding discretion was the better part of valor when it came to UFO crash sites and investigators, I made my exit. 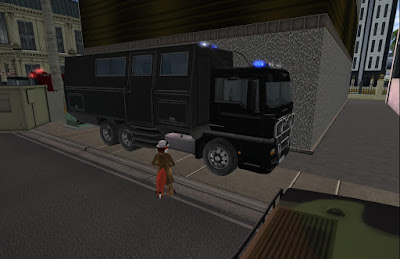 What the clues gathered point to is obvious. But big claims require big proof. The UFO and the "body," the latter of which could easily have been a mannequin of some kind, are in the hands of Federal investigators and the military. And they frankly aren't talking. If it's a military experiment, why would they be trying a design that a few decades ago had failed? It's possible this was some rich man's prank that went awry when it crashed. And neither explanation covers the "street circles" and the Groundhog Day incident. 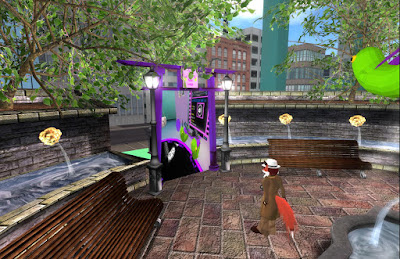 Presumably what happens next is rebuilding. There's already a "Flying Pickle Park" at Montecito Bay (171/30/24) which leads to the humorously-themed club of Sheba Metaluna. And with the big piece of evidence down from the old Galleria, it will likely be gone soon as well as the body (or mannequin). And with them the chance for the town authorities for solid answers. But as it doesn't seem to take long for something else weird to happen around here, it's likely the town will move on and residents can pick and choose from the official exploration, and that made from the few clues gathered from townsfolk and media.

Note: The preceding is a fun article based on goings-on by the people of Montecito Bay themselves and not the actions of any griefer.