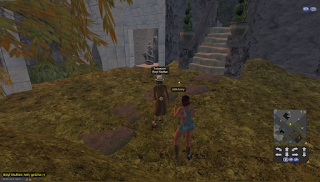 The Confederation of Democratic Simulators is perhaps best known for it's elections in which it's landowning residents chose it's Chancellor and Representative Assembly. But there's more to the place than that. There's plenty of unique places to see. One place with some history behind it is The Monastery. In early May, Lilith Ivory told me about another: the Catacombs.

We met at a spot in the Colonia Nova sim near a spot where a set of stone stairs led from a paved area to a trail of stone steps in the grass (for those wondering about my appearance, I was in the period of a Relay "Bid Me" event). Underneath a raised road next to a wall with a number of posters with comments and political cartoons, there was a canal or river that led to an opening in the wall with what looked like a few alligators chewing on something. There were some red footsteps leading from the gators to inside, suggesting someone got a little too close to one of the reptiles. 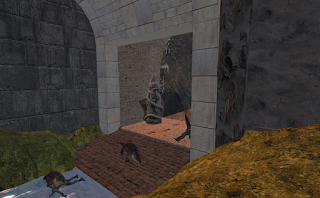 Lilith told me, "We use to talk about this as the catacombes but in fact it was meant to be the sewer system of Colonia Nova. Colonia Nova is our second oldest sim and the citizens had the brave plan to have an underground sewer system under all the buildings of the city. Sadly we ran out of prims and it got never finished. So we just used the part of the sewers we had already to store anything and anyone we didn't need any longer. (smile) I think the oldest part of the 'catacombes' as we call the now was build in 2008 by Moon Adamant who is still around here."

Curious, I asked about the 'and anyone we didn't need any longer,' wondering if that was a reference to those who passed away. Lilith answered, "Some citizens just disappeared without telling anyone and without paying the tier they owed us and there are rumors they are trapped down here." She smiled and started walking to it, "When we enter it is best you set your windlight to midnight and grab a torch. And please be careful not to step on a gator as they are sensitive (grin). We try to keep them calm and feed them with griefers." I complied, not wanting a trip to the clinic. Just inside the entrance, there was an old statue and a torch on the wall. Clicking on the latter I got a light of my own. 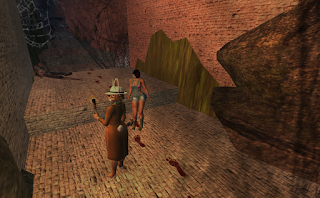 We went inside, the red footsteps going in and past cobwebs and what looked uncomfortably like a body. I also noticed a rat began following Lilith, but seemed more curious than anything so i spoke nothing. Pointing to the interior, she told me, "That´s the oldest part of the catacombes, build 2008 as I said before. And I somehow got (to be) 'keeper' of them since nearly the beginning. I got asked to decorate for Halloween 2008, and while decorating I got ghosted here myself for One Week! I crashed and couldn't log in again as my avie was stuck here. No restart and nothing could free me again. So after a week of trying I had to call the Lindens for help," she giggled, "I could log in fine with my alt and he saw my avie standing here." 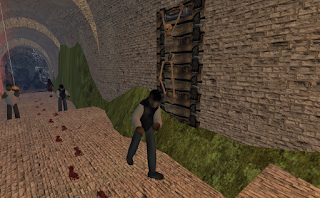 We walked past a mass of spider webs into another stretch of tunnels, the red footprints continuing. "Now we need to move quickly," Lilith told me, "as this is the section where we have trapped the ones who tried to create civil unrest in (the) CDS. All you can do to escape is, RUN as fast as you can." I asked what she meant as we rushed forward, and she answered, "We banished them down here, but if you are not careful they still try to get you." After getting past a step, she stopped, I looked back, and saw a few lumbering forms looking like something out of a zombie sim stumbling our way. Lilith grinned, "Fortunately they can´t climb stairs." 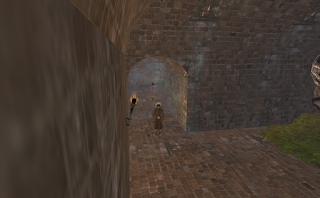 Moving on, there was the occasional skeleton on the wall, and a pile of bones mixed with dirt. There was also what looked like an occasional ghost, or perhaps it was the light playing tricks on me. And there were a statue or two of creatures, although there was that creepy feeling in my spine that was feeling that was no statue. Soon, Lilith told me, "Now we are about to enter a newer part of the catacombes. We sometimes renew them or add pieces." She asked me to follow close behind, commenting, "It´s often a good idea not to trust what you see in CDS, especially solid walls." We then went through an area with what looked like bodies on the floor, then through a secret passage. "That's the chamber of citizens who have gone missing. They didn't find the exit." 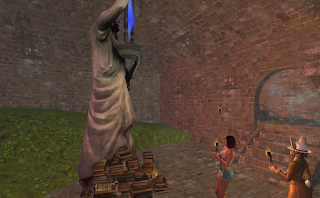 Going through the chamber, which had a few statues of creatures, Lilith told me, "This part is actially under a private building like it was planes in the beginning. We store the founding documents and some laws here, especially the ones that should be forgotten." We moved a little further to a room with stairs leading up, "Here I tried to continue with the original idea and connect the basement of a private building with the sewer system."

We went still further. After a little longer through the dim, dusty tunnels, Lilith told me, "And here is the exit of the catacombes, or another hidden entrance." Getting past the secret door, we went up some stairs, "This building is made by Sudane Lately." And we found ourselves inside a temple. "Temple of Diana," Lilith told me, "We had an older temple here before but there was always this hidden entrance to the catacombes." 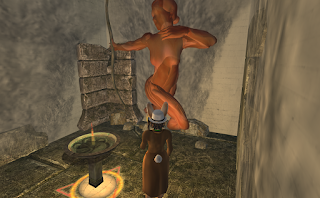 Bringing up her mishap there one Halloween, I asked Lilith if there were events held at the catacombs every year that holiday. She told me, "I would say it is more than just Halloween deco but we always send people here during Halloween. Sadly we never got to celebrate a real event down here. I guess most of our citizens are too scared to spend much time in the catacombes. We here in CDS are proud of hidden spots like this," Lilith went on, "We have something like this in the Schloss too, hidden doors and ghost ... and a secret entry." 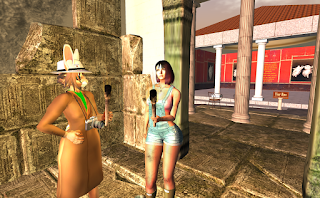 I brought up those whom were trapped here, and asked if one in particular stood out. Lilith thought for a moment, "There are rumours of course that one of our founding members, Ulrika Zugzwang, haunts this place," she smiled, "but I have not seen her ghost lately. ... s far as I have learned she helped building our community, but felt betrayed and left. ... And of course there are stories of  others too but," she threw a little salt over her shoulder, "it´s better not to wake them by mentioning their names."

That was about the end of our conversation, Lilith wanting to wash the dirt and spiderwebs off. She offered to show me a tour through the Schloss and it's secret area sometime. Perhaps that can be done later this year.