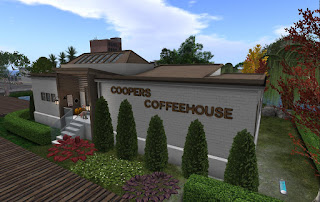 Among the places one can relax in Second Life, one recently had a major makover: Cooper's Coffeehouse. Located in Lionheart Nala, people can enjoy games such as 7Seas and checkers, live music events, books to read, and of course a chat with other residents. Last month not long after it's reopening, I interviewed with the owner, Cooper Udimom about the location.

Cooper, like a number of other residents, had gotten his start at The Shelter, which had only recently closed. "I heard! I was so sad (frown). That was literally my first hangout spot in SL. I was just recounting in a chat how when someone gave me an object to wear on my first day and I wore it. Well turns out it was a giant prim penis that stuck on my forehead and I had no idea how to get it off. Made for an interesting time. Gosh its crazy to think I've been in SL ... over 15 years! My first avi was in 2004." 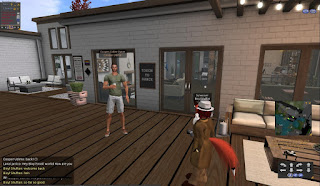 Cooper explained when he first joined, it was under a different account, "Long since gone (chuckle). I don't even remember that accounts name. But I started using my Alex1 Richardson avatar I believe in 2006. That's the avatar I created The Lighthouse Restaurant with. I still have all of the old products, notecards and textures. All from nearly 10 years ago. Quite the trip down memory lane." And how was running a restaurant in a place where people didn't need to eat? He actually did very well, "Honestly it was so much fun and super challenging - because there wasn't anything like it in SL. We were one of the first, so it exploded kind of rapidly. We had 1,000 plus people in our group and booked out reservations two to three weeks in advance. I had an amazing general manager, who basically ran the place after a few months. I am so sad she is no longer playing SL. We even kept touch in real life for awhile, but she's since disappeared (frown)." Checking his notes, the place had been running from October 2008 to January 2010, "We had an average of 100 unique visitors a day, 18,000 in the first 8 months." 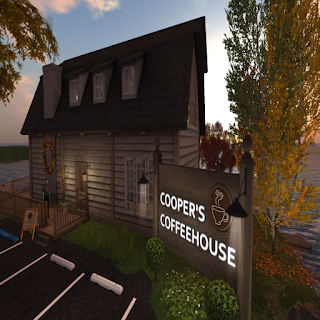 He would take an extended break from Second Life, "I actually joined the Navy in real life. So that was why I took such a long hiatus from SL. I lived and traveled all over the world for a good eight years." Needless to say, things were different upon his return, "I came back in around 2017. I think mesh had just started to take off. I was on very intermittently until about April of this year when COVID happened. That was the biggest change. Logging in in 2020 and finding literally 99% of avatars were totally different, and you had to buy a specific'"shape' just to find clothes that would fit you. It was a massive learning curve. I really felt like for probably a month just like I had back in 2004 when  I first got into SL." When I asked how intermittently he was on, he answered, "I was on SL maybe once or twice a month from 2017 until 2020. (I) had a lot of real-life things going on." 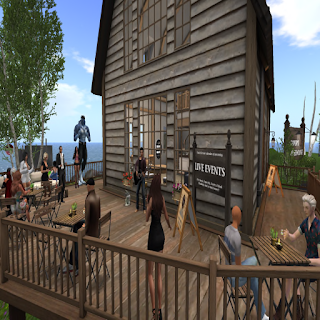 Also in 2017 was when he first started The Coffeehouse, "That started on a tiny plot here in Lionheart, a sim or two over. ... It quickly became too small, so we moved to a very large property over in Second Norway. That was our biggest location in terms of space." He would later move a third time in June this year back to where it is now, "Definitely lots of moving around (chuckle)." Of when he first opened it, "The first few days it was very relaxed. I think we had a few live music acts. But there wasn't really anything *big.* I didn't really have the time nor the funds to pour in, moreso just wanted just a place people could come to to relax and unwind. But we developed a fairly decent group after about six months. And that was with no advertising other than the 30$L places ad, and the occasional post in a live music group or something." As mentioned, he didn't have much time, "I really only came on to pay tier and to ocassionally do some live events. ... Now that I have more time and a little bit more RL funds, I'm hoping to put some more effort into getting the word out." 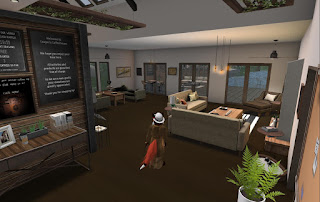 Things changed in 2020 with the Pandemic, "Which was, morbidly enough, beneficial for me in the sense that I now worked from home. So I could really put more effort into SL. Granted, I went back to college also in January of 2020 so I still didn't have *too* much time. But definitely more than before. And now my schedule is really starting to mellow out as I approach graduation."

The Coffeehouse has recently gotten an overhaul. In an notecard, it was described as taking "over 20,000$L in renovations spanning three weeks ... with 1,000 combined prims." There are several games people can play with each other, "Chess, Checkers, Hangman, Memory games, Connect-4" and others, as well as 7Seas fishing contests. There are occasional chess and checkers tournaments. It is billed as a "Certified 'safe space' and child/family friendly." I asked what sparked his decision to spend the time and money. He answered, "I had much more time to devote to SL. The build before this that was here was very rapidly done. I think I put everything together in half a day. So I really wanted to take my time, get a new logo, develop my own drinks and menu, and really design the place thoughtfully and methodically. This all took me probably three weeks of four to six hours a day either on SL, researching things online, or looking up products in Marketplace. And then the obvious building, which all took place off-site very slowly." 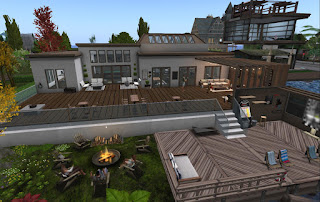 The place had it's grand reopening on Friday October 2, " It was a very very soft reopening ... And by very very soft I mean I sent out group notices and subscriber IMs, and that was it. I'm hoping the renovation and some renewed effort in terms of advertising helps build up a better base and we can have some well attended events here in the near future. So I reached out to a few writers groups and individual artists in SL, only a few got back to me. I think we have maybe four or five SL books or publications thus far. Not much. Again, hoping to change that with renewed vigor and resources. We have a panel on our sign 'Be a Featured Artist.' We offer free exhibition space for photographers and artists and of course space in the reading nook for anything people would like to contribute." For those interested in contributing short stories, "That's okay. My plan is to in the next week or so add some sort of 'filing system' where people can contribute notecards with short stories, poems, etc."

There were people around, so I asked if the reception to the changes to the place were very good. Cooper answered, "Yes! So far very good I think we've had about 10-15 people in the first day.  Zero advertising thus far, other than our group notices. I truly think the renovation is going to be very good in terms of word of mouth advertising." 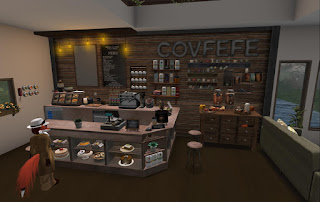 Of his plans for the near future, Cooper had this to say, "The plan is to add some small things like the filing system in the reading nook, and whatever other suggestions we may get from visitors, and then devoting time to reaching out to media outlets such as yourself to start advertising. I think after maybe two to three weeks we will start working on live music events, maybe try our bingo night again. Some of that buffer time is for mental recovery as well as financial (chuckle). I'm actively trying to hire some people right now as well to hold events so it doesn't all fall to me."

For later on, "I think long term the plan is really to just build up a good following, where there will always be people here so if someone just wanted to come here to meet new people or make friends they could. Of course I have a bunch of 'dreams' you could say. I'd love to hold charity events here, maybe an art exhibition or writers conference. Definitely a regular open-mic kind of event." Two possible charities were the Relay for Life and Homes For Our Troops.

Cooper makes no money from the Coffeehouse, though does accept donations to help pay the tier. One can check out the location's online calendar of planned events at https://teamup.com/kswj3z3t8s918a866q , though there will likely be plenty of unplanned ones.

Cooper's Coffeehouse is located at: http://maps.secondlife.com/secondlife/Lionheart%20Nala/53/179/30

Posted by Bixyl Shuftan at 3:30 PM