Longtime residents of Los Angeles California, and fans of the movie Xanadu, are probably familiar with the Pan-Pacific Auditorium. This landmark structure with it’s futuristic design has seen some incarnations in Second Life as Xanadu-style clubs. Recently, a replica of the iconic building was constructed on the Grid, at the appropriately named Pan-Pacific Island. 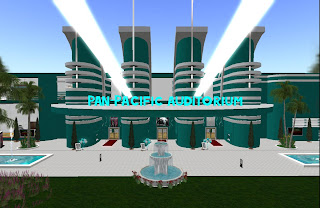 Second Life’s Pan-Pacific Auditorium is a massive build, the building and the grounds just around it taking up the width of the sim. Those walking up to the building will walk find decorative fountains in the front walkway, mixed with palm trees. The building’s four iconic towers, considered one of the best designs of “Streamline Moderne” architecture, stand prominently above the entrance. A notecard states the green and white facade was built to resemble sweeping aircraft fins. Four flags fly high above the building. Two searchlights pan around, particularly visible at night.

The building is just as well designed on the inside, with much attention to detail. Passing the lobby, one finds themselves in a huge interior space. Around the interior are 1950’s style advertisements, from automobiles to Elvis Presley concerts. There are also some cars of the era on display. One corner has a tribute to the real-life structure with some photographs of the building. on the west end, stairs lead up to a diner, where one can order a drink from the (bot) waiter on duty.

On the east end of the auditorium are where events are held. Both times when I came by on weekends, the place was packed, once with 49 avatars. At one end of the open space for dancing is a DJ booth with equipment. At the end of the building is an impressive, wide stage that between parties displays pictures of the real Pan-Pacific building.

While there once, I ran into one of the co-owners, Amxscott Hammill, “It is based on the actual footprint of the real-life building, which was huge. The web master of the Pan-Pacific Playground web site helped me a lot. ... I have always liked the building, and had actually recreated it in a now closed world called There.com. It closed before i got to open it. (laughter) ... A lot of my friends have come here since There closed.” 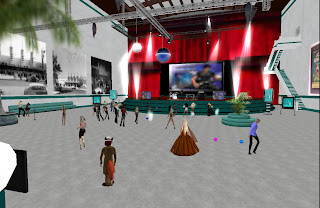 Amxscott told me the auditorium took close to a month to build, “Decosta Builders built the structures based on my photos and pesky input. I decorated the interiors. I think I drove Razor and Lusti crazy with all my changes along the way. ... things like can the towers be more rounded? ... Being new to Second Life, I had no idea what was possible. ... The right colors and textures on the walls, just a lot of little things that I saw in my mind trying to translate it to them. Everyday I see something else cool I want to try. I was just talking to the lighting system designer about the house lighting controls. We were swapping out the boards and moving things around.” 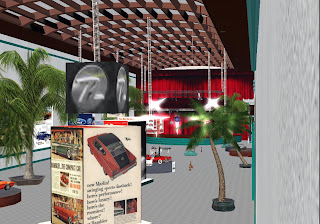 Amxscott was more than happy to have live music at the club, “It is very cool to have these acts in my building and to see people enjoining them and learning a bit about the building, live music as well as changing exhibits in the rest of the hall over time.” Amxscott told me in the future, he may host art shows, “the real-life building was used for just about anything so I hope to do that here. This is large enough to display just about anything. ... my building manager JME Couturier is busy booking acts for the next month now. I did not know how to go about the booking so she is running that part of this venue and I am learning a lot.”

Besides the Pan-Pacific Auditorium, there is an apartment building to the southeast built in the style and colors of the famous building, the tower stretching into the clouds. The interior is still under construction. The remainder of the sim is wilderness, trees, river, and a small mountain.

The real Pan-Pacific Auditorium opened in 1935, and for more than 30 years hosted a variety of events from sports, to car shows, to political rallies, to live music, and more as Los Angeles' primary indoor venue. It was closed following the opening of a larger convention building in 1972. The building was occasionally given some public attention, such as it being included in the National Register of Historic Places in 1978, and when it was shown as an abandoned building made into a disco club in the 1980 movie Xanadu. But it was left to deteriorate until it was destroyed in a huge fire just six days following it’s 54th anniversary, the smoke visible for miles. The location is now Pan-Pacific Park.