The “Crooked House,” a Brilliant Build in Danger of Leaving Second Life

This is what happens when a math genius builds something in Second Life. 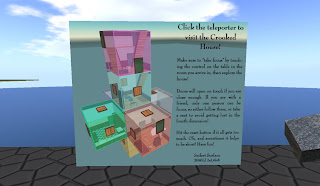 I recently heard about a particularly clever build, the “Crooked House.” To begin with, the inspiration for it was a short science fiction story by Robert Heinlein. A man builds a house in a strange eight-room “inverted cross shape.” Before he can show it to friends, an earthquake causes the unusual structure to fold onto itself to become a true four-dimensional shape, or tesseract. Looking inside, they find the stairs and doorways leading back into other rooms, forming a closed loop. And from there, things get stranger.

The SURL I found let to a teleport to the place with a sign next to it with the following:


“Make sure to ‘take focus by touching the control on the table of the room you arrive in, then explore the house. Doors will open on touch if you are close enough. If you are with a friend, only one person can be the focus. So either follow them of take a seat to avoid getting lost in the fourth dimension! Hit the reset button if it all gets too much. Oh, and sometimes it helps to be short! Have fun! Seifert Surface” 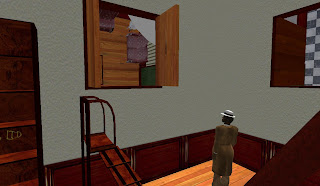 Getting to the structure, I found a well designed interior with 19th century furnishings, pressing the red button on the table as asked. Looking around, things seemed normal from the inside at first. Panning out, it looked like I was at the middle of this eight room structure. But as I went from room to room, things begin to get strange. Going to the next room and opening a door that should have led outside, it instead led to another room. And going to that room, there were more. Although a few doors were locked, there were always some open leading to an endless loop of rooms. And soon the rooms themselves begin to appear at odd angles. It looks like at first the furniture is on the walls or the ceiling. Then I noticed it was me seemingly on the wall, or looking down from the top.

What’s the secret to this extra-dimensional enigma? A Youtube video shot from outside tells the tale. As long as someone is the focus of the build, the house will rearrange it’s rooms around the person as he/she moves from one to another. For anyone else, the house will remain static, and if it moves around someone whom is the focus they might fall unless sitting down.

The Crooked House has been around at least since June 2006 when Hamlet Au wrote on it after being told about it by Torley Linden. Seifert described the script algorithm as, “[B]asically the focus cube tells all the rest that it’s [the] focus, and where it is, and what its rotation is. And the other cubes move to match up.” Trying to explain further went over Hamlet’s head, whom then asked if it could simply be thought of as like “a 3D Mobius strip.” Seifert answered, “that’s a pretty good way to think about it, except Mobius strips have a twist. And this doesn’t. ... the formal term would be ‘ orientability.’ The Mobius strip is non-orientable, this thing is orientable.“ 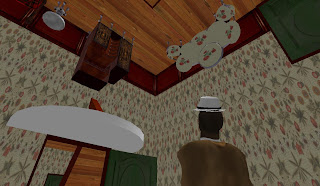 Originally in The Future sim, the Crooked House was later moved to the xyz homestead for anyone whom wanted to visit it, along with the Sculpture Garden. But now, the Crooked House is up for sale. And unless someone comes forward, the place will fade from the Grid.

"I think [Linden Lab's] tier day is the 20th of each month,"Seifert told Hamlet in his recent article, "so I'll leave it until July 20th... it isn't worth $125 a month to support ... I thought people might like a chance to see it before it goes." The homestead also his the distinction of having former Linden Qarl Fizz as a neighbor. Seifert was also willing to move the Crooked House on someone else’s place, if they have enough space for the “just over 700 prims” structure, as well as a wide-open sky.

So unless someone steps forward, like the house in Heinlein’s story it will vanish.

One can read more about the Crooked House through Hamlet’s 2006 article, and his more recent update. On Youtube, I found a voice narration of Heinlein’s short story that inspired the build in two parts, the second ending when the main character realizes what his house has become.

Once again, you have until July 20th to visit.