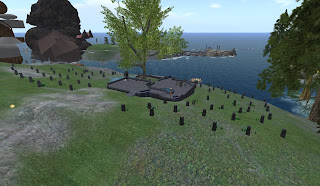 It’s been a year since the “Restructuring” of Linden Lab was announced. About a third of it’s employees lost their jobs, including many of the Lindens we saw on the Grid. This included some popular figures most Second Life residents seemed to hold apart from the usual love/hate relationship they had with the Lindens as a group. Indeed with the layoffs, the residents stopped referring to “the Lindens” as those to blame for their problems. Instead residents felt sad for those whom lost their jobs, those whom wanted to blame someone pinning it on M Linden, who would step down himself a couple weeks later. 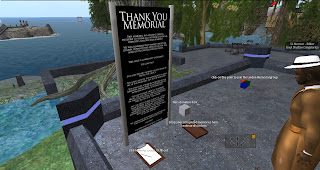 CodeBastard Redgrave, the owner of a nightclub, did more than just express her sadness. She constructed a memorial to the Lindens whose avatars had died with their jobs. Placed at the Rouge sim, CodeBastard expressed plans to move it to another place at a later time.

One year later, CodeBastard still has a memorial up. But it is in the Bowness sim. The flat headstones are gone and replaced by dark polished marble posts, many with flowers and other tributes by them. In the middle was a central structure, which included a sign.

This Memorial is a Resident-Driven Initiative to Thank All of Those Linden Lab Employees We Loved And Admired.

We Will Remember They Shared Their Time, Efforts, Humanity, and Dedication for the Good of SecondLife and Residents. 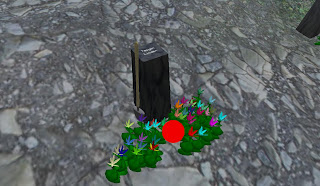 Near the sign is a box one can drop notecards, the “completed memories.” There is also a tiers donation box. The sign goes on to describe residents can leave flowers by the monuments by making a cash contribution, and clicking on the marble posts enable comments left by other residents to be read. Objects other than flowers can be placed by the graves, but they have to be sent to CodeBastard Redgrave and need to be “very low prim.”

“We thank you in advance for supporting this community-driven initiative.”