SL8B and a Tour of London

Whatever perspective we teleported to, we were greeted with a fair-like setting, complete with unique builds. Some so large, one had to adjust the camera controls skyward. To explore this cooperative effort would clearly take days of weaving in and out of the twenty plus sims. A major obstacle that took patience to deal with was the lag, but for many, it was worth it. It was the perfect opportunity to be entertained by popular Second Life musicians and to speak to various designers, educators, and Second Life magazine and television representatives. 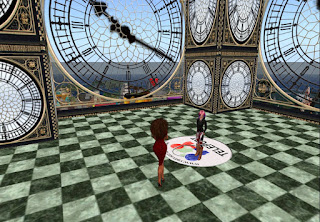 To meet anyone in Second Life, you merely go up to them and say hello or do it through a group message. That's how I met Debs Regent, of London England, Hyde Park, Mayfair and Kensington in Second Life. The London Sims are owned and operated by Regent’s Virtually-Linked.

Regent and I were standing in the Bell Tower surrounded by clock faces.

"I thought one of these rooms would be most appropriate as it represents the magic we offer, which is the inspiration for others. Many versions of London have been created because of the original one. Both are in Second Life and other platforms," she stated in response to the best photo opportunity.

Regents added that many people started their Second Life lives in the London sim. The creators pride themselves on being a "safe place" for its residents and visitors. Media events, educational conferences, shopping and exhibitions are all popular and are based around London themes.

"We hold events and create high quality events and builds for clients such as The Daily Telegraph, DGMT, and Premier Nunez/Coldwell Banker," she said. "More recently we have worked for a real record label to produce a machinima video for a major single.” 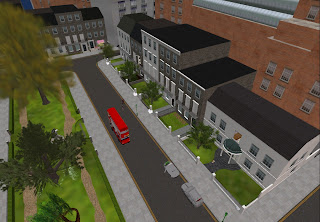 Our conversation continues in Kensington. A teleport invitation leads to a very impressive representation. Both of us have to step up on the curb so the tour bus can pass. As the bus tells us to "visit the magnificent St. Mary Abbot Church, Regent explains that we are standing outside of Wholefoods and a line of other quality created stores.

Our next stop is Kensington Square. There are 61 rentals. I found one to be $1,725 a week for 117 prims. My new tour guide is Sim and Infrastructure manager, Rob Fenwitch. He leads me through the rental.

"All the houses are in Kensington Square," he states. "There are three loft apartments around the corner, but this is the main residential area. You get the best houses in London. It's quiet here and the Sim builds are of the highest quality."

He explained that all of the homes have Hippo security and a radio included. The doors and security are integrated with the rental system so the tenant has full control of them. They also offer a retexturing service for the walls. There are two rooms and a balcony in the model I viewed.

"There is a pub at the end of the square, which is a facsimile of the real pub," he said. "At the moment there are three live DJ sessions per week also available for chilling out." 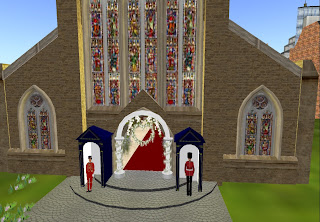 The Kensington Arcade building is the next stop of the tour. Fenwich states that this building and the area surrounding it tend to be the busiest. Most of the builds were created by TD Reinard. This one took three to four months to build. There are three floors of conference rooms. The office suite I saw cost $499 in tier and allowed 30 prims. The building is headquarters for the Daily Mail Transport and a number of magazines.

"In the Kensington building we do fashion shows and occasionally a wedding. The parcel is 6896 sm. It has a roof garden, too,” he said.

Fenwich feels this is the most realistic representation of modern day London. You will enjoy visiting the many structures, but watch out for the busy tour bus traveling around town.

By Netera Landar
Posted by Bixyl Shuftan at 5:30 PM