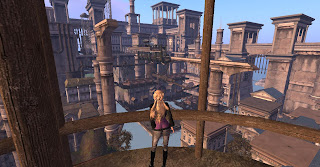 The city hovered on rocks high above me as I made my way in on cobble stone roads, passing a a marker, like a gravestone , on the way that said “Forgotten City.” It was a long walk over several bridges until I came to a sign that said elevator. I pressed a button and down came an ancient box. I had no idea where I was so after pressing a few buttons a cage closed and I went up to level 2. The cage opened and I almost stepped into an abyss until I realized it was a two way cage and stepped out the back door carefully.

This is a silent empty sim with magnificent buildings to explore. The doors are impressive and the wall paper in one of the lavish buildings spoke of older times as did the parquet floors. No furniture remained and no portraits on the walls. I passed a neglected sign that said "Rent a House." I came across the first automaton in the square stationed in a kiosk that said "News Tobacco and Souvenir Stand." I glimpsed a lamp lighter in the distance but as he approached I saw it was another automaton. I was to see many more as I walked along . They are the workers who keep the City going. 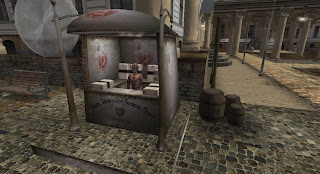 I came across a fantastic steampunk water wheel behind the houses and stopped to watch it work for a while wondering what purpose it served. I saw a zeppelin take off and vowed to take a ride in it next time it came down. In the meantime I set off to visit the Capitolorium. There some wonderful eclectic pieces of art on the walls inside the building . The centerpiece in the entrance way is an old fashioned train set with locomotives and cars rounding the tracks of a miniature village with miniature people waiting to board the cars outside a the station. The tiny towns have familiar names to me: Chesterfield, Bellows Falls, Brattleboro ... all in the state of Vermont in the USA and I have been to all of them. It is a sight not to be missed.

I stopped in the saloon to watch the dancers on platforms move around and around. Out back in the courtyard I found a map of the city recommending rentals of the abandoned buildings. As I roamed I did find that indeed some people have returned to take up residence in the city in various corners . So perhaps in the future perhaps it will come to life again. I finally caught the Zeppelin and took a ride over the city. It is a great overview of all there is to see there. There is an intricate system of pipes running through the entire area carrying power from the waterwheel I assume in the form of steam. I found the port with a schedule of vessels that come by at various times and you can hop aboard or you can take a row boat and explore the canals. 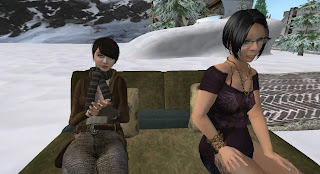 I was lucky enough to meet the owners and creators of this spectacular sim. The newest addition to the city is a Winter Park (you will need a mesh viewer at the Winter Park) with ski jumping and other fun activities, and I went there and sat down to talk to them. I was interested in why and how the sim became. Jenne Dibou and Mandy Marseille are the creators of the City. Mandy explained “we had a different island here, called SOL Solution Island, owned by a good friend, and built too mostly by Jenne ... but that friend left SL and so we had to decide to go homeless or try to build something that's more than a playground for us. Something 19th centurish thing, but more Central European than British, so the build style is really a mix of 'fantasy' and secession/jugendstil, a kind of branch of Art Nouveau that was common in the Austro-Hungarian Monarchy and the story is basically that our dear renters (who we love very much!! *smile* ) or explorers arrived here around 1885ish ... they have discovered this city in the middle of nowhere really. And they realized that people are gone, even though you can see Lincoln or Napoleon had once visited this place.” 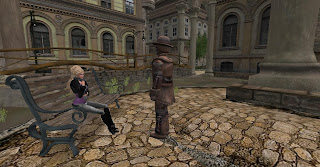 After I left I paid a visit to the JD Mechanical Toy Factory. That is a must and you can find teleports around the Capitolorium and in the streets to take you up to it. Outside you will be able to try some of the games available. Horse racing was great fun! Choose your horse and watch it win or lose. Play poker with a friend. I lost! I tried the shooting gallery and did not do too badly there. Inside the factory itself you can purchase lots of fun steampunk items including creepy avatars, automatons, flying machines, motor vehicles of past ages, and entire buildings. It is a steampunk aficionado’s delight!

In the meantime plan on a long visit to the Forgotten City. As I look at the last view of my visit I know there is more to discover. It has been a while since I have found such an amazing sim to visit over and over. Perhaps I will see you there. It will be not so much "forgotten" but unforgettable.