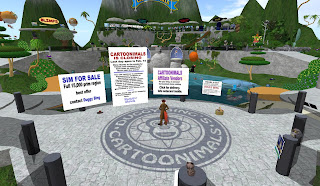 Daniel Voyager had some unhappy news on his blog the other day. The Cartoonimals sim would be closing in about a month. Owner Duggy Bing had put the region up for sale, saying “real life projects” were taking up too much of his time to keep the place.

Cartoonimals was a store, but its creations are so funny and whimsical the place is well worth a stroll through just to chuckle at the goods. There’s a wide variety of items from virtual pets, wearable and grounded, tip jars, novelty items, and more. The place is arranged in a circle so the sections are fairly easily accessible. There's also a roller rink in one corner, presumably designed for social events at one time. 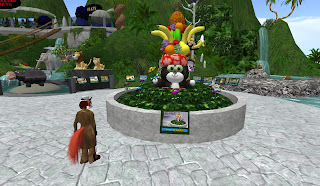 Duggy will still be selling his items on SL Marketlace, plus his vendors will still be up in various places. He stated some details in a notecard:


I’m dropping you a note to let you know that I’ll be closing Cartoonimals in about a month. Real life projects have been taking increasing chunks of my attention and I simply haven’t had time to devote to creating new products and attending to marketing (never was too good at that). It was a terrific couple of years and a very rewarding experience. Not a single customer issue that could not be easily resolved….in SL that’s saying something! I want to especially thank those of you who helped with ideas, scripting, building and support. 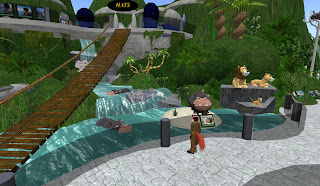 I’ll continue to offer my stuff on Marketplace, as well as through affiliates. I will be inworld at least once a week to assist customers and replace missing items. As always satisfaction guaranteed.So again, thanks so much. If I ever find a Third Life I hope you are all there!!!!—Duggy
Treet TV took a look at the place in 2009, and the video is still in the archives. But it’s no substitute for visiting the island yourself. Head to Cartoonimals (162, 157, 24).