Last month in December, I heard about something that seemed a little off to me, a Mitt Romney dance club. Actually, the name listed was “Mitt Romney for President.” Curious, I decided to investigate, and teleported over.

For those not in the know, presumably mostly outside the North America, Mitt Romney is one of the leading contenders to be the Republican Party’s candidate for the Presidency of the United States. In 2008, there were several places on the Grid that were either the locations or planned locations for builds to publicize both Democratic and Republican candidates for their respective party nominations. And now, one had arrived for 2012.

Arriving at the club, attendance was light. But the enthusiasm of the people seemed to show in their “Believing in America” tags. The partiers whooped and “Yaaaaay”ed and gestured much like other clubs I went to. Stacey Zirgar was the lady DJing for the club. Noticing the club listed her as the owner, I spoke to her when the event was done.

“I didn’t plan this,” Stacey spoke of the party, “I just kinda got it there. I figured the best way to get the word out was for me to DJ.” I asked how a club with a political candidate’s name on it came to be, “It’s not really a club. I am a DJ in SL, and I DJ at a lot of clubs, but I created this for a couple reasons.” She wanted to educate others about Mitt Romney, as well as make a place like-minded supporters. She found no one around when she dropped by the GOP Cafe, “so I decided to make this place today. There is nothing for Mitt in Second Life, so I rented this parcel, set up the office in the back, got the group, and all the rest of the stuff I had in inventory.” 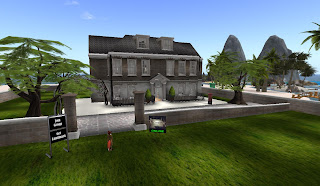 Noticing a larger building in the back, I asked if that was the information center. “It will be,” Stacey answered, “and a meeting area.” She invited to show me around, though told me she had yet to put in much detail. In the land description, she put, “This office is for supporters of US Presidential Candidate Mitt Romney. Weekly meetings and events will be announced through this group. If you want to volunteer, please contact Stacey Zirgar: www.mitromney.com .” She told me she had a fundraising page on his website, “I don’t take fundraising money in Second Life.” I asked if the place would remain open until Election Day should Romney win the nomination. She told me it would. 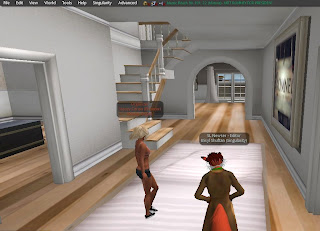 Stacey didn’t have anyone else helping out at the moment, “I just started this today, so I have to get the word out.” She did have a classified ad somewhere, and had a donation jar if anyone wanted to help pay for the cost of the land. She had a $500 US dollar fundraising goal, “but mostly this will just be for information and meeting others who also support him.”

Stacey told me she’s also a DJ in real life. On the Grid, “I have tons of stores in Second Life, so I am really a business-oriented person." It wasn’t long before she had to be elsewhere, and we parted ways.

I dropped by again this week. Although the land was still in Stacey’s name, the stage and info canter were gone. Perhaps she is in the middle of rebuilding. The group "Mitt Romney for President" and her fundraising page are still active.