In the virtual world of Second Life, lots of clubs seem the same. Contests to draw regulars or new blood, the same DJs or events. Human and furry clubs both have to think of new and innovative ways to make itself stand out, to draw the furry and/or human clubber.

Nydia Tungsten has done that with her new club Castaway Cove. And she did say humans are welcome just like the furry crowd the Nydia aims to draw to her sim. Her main goal is create a common area for the residents or outsiders to come and relax. 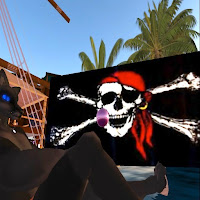 The first thing I noticed after I used the landmark Bixyl gave me is that I land on the beach. Not many clubs are located like that. Then I see, "Ooo neat looks like a pirate ship sliced in half." And indeed there are two halves of a pirate ship laying on the beach as if it was in a shipwreck.

Another thing that Nydia brings to my attention is the Psicorp vender that one of her employees Sylnaya Windlow brought to Castaway Cove. Psicorp in the furry world of SL is a big deal for various furry products. Local builders like Fortunas Sands and Lsai Aeon also have shops here at her club.

In addition to the basic dance area I saw many other attractions on Nydia’s sim. For one example the game "Primtionary," which happened to be in an earlier article of the SL Newser but I asked anyway, "Primtionary, what game is that?"

In Nydia’s own words, "Well if you have ever heard of pictionary, it is like that, but instead of drawing the clues you build them with basic prims."

"So if I wanted to build an apple it would be a red sphere with a stem at the top?"

Nydia said yes, and she gave one hard example of Lsai having to explain jet lag, which she did accomplish after a lot of hard work. Each correct guess wins a small linden cash prize. 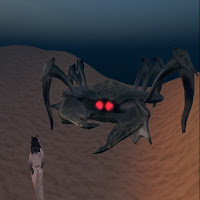 On top of having a unique new game on her sim Nydia also has jet skis to zoom around on and board games to goof off playing with friends. Also there was Bruce, a large crab at the bottom of the ocean. It was a big daddy! Be sure to ask Nydia about her special tub and to view it at sunset.

After I finished this interview I had fun playing the SL version of the game Clue with Helios and Rua. Besides Clue I also saw Greedy Greedy.

So next time you want to try out a new hangout spot just to try something new. Go to Nydia's Castaway Cove, located in the Kalmeere Paradise sim (18, 184, 21)

Grease Coakes
Posted by Bixyl Shuftan at 2:50 AM