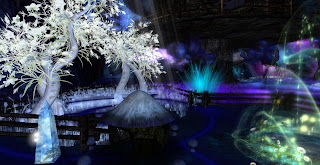 
FMODAKFAP is a wonderland of changing colors, swirling stars, soothing chimes, and other fantasy objects too numerous to list.  A notecard explains that Anatine was inspired by his recent purchase of the Wishmaster HUD on SL Marketplace.  He wanted to create an “immersive fantasy photo environment,” and he succeeded. 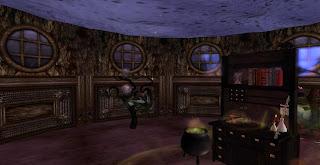 Anatine’s notecard, which you can pick up at the landing point, lists the interactive photo spots that he has created.  They are all interesting, but in the Enchanted Fairy Circle, you can fly like a fairy.  My favorite spots include sitting atop magical mushrooms and inside one of the cocoon-like white chairs. The chairs include different poses, including a yoga meditation one.
When you are finished exploring the landscape, climb the wooden ladder to the fantasy structure that is uniquely Anatine.  Two circular rooms are connected by another ladder.   In the spooky Victorian library you will find chairs, a sofa, and a nice pot of tea.  But keep a sharp lookout for witches, ghosts and goblins.  Boiling cauldrons, a crackling fire and a stack of books about magic spells mean they must be close by. 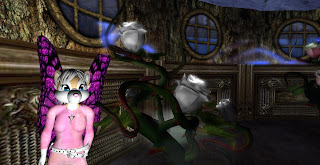 This fun site is filled with imaginative flowers, crystals, lighted trees, and other fantasy objects.  I was inspired on my second visit to take some photos wearing a pair of fairy wings.  Anatine encourages visitors to use their own poses, special effect HUDs, and to thoroughly explore his creation.  At the end of their trip, visitors will find three souvenir gifts that Anatine made to remind them of their magical visit to FMODAKFAP.