On October 31, 2012 the Virtual Museum of Architecture plans to close its sim, located at Purdue University (69, 55, 35).   The VMA will still remain in Second Life, however.  Djinn Dasmijn, Co-Director  of the Museum, said the group plans to focus on the educational aspects of architecture through lectures and Build-offs. 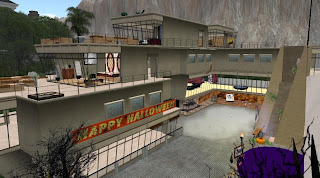 The VMA celebrated its achievements and allowed its friends and supporters a final party on Saturday, October 27.   Bluemonk Rau served as DJ.   The plaza area was decorated for Halloween, with ghosts, spider webs and a revolving pumpkin dance floor.   Most partiers came in costume, and many participated in the best costume contest.   A lot of residents attended, including my former neighbors and friends, Erin Fensen and Asana Trudeau.   Asana had initially worked with the Frank Lloyd Wright Virtual Museum. 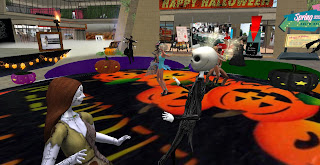 Like many organizations in Second Life, the VMA has been struggling with the high cost of maintaining a sim.   The reorganization will allow it to continue with its prime objective of education.   Rosalie Oldrich, who is the other Co-Director, stated that Builder’s Brewery is providing space for the lecture series that will accompany future Build-Offs.
During the party, Djinn Dasmijn and Katsii Tennan invited supporters to take a final tour of the sim. The next day I decided to do that.  I went back to the Museum to take a closer look at the offices and snap a few photos.   The offices are in a three floor structure that is a model for what real-life offices should be.  There are skylights and large windows to let in light, fountains to provide soothing water sounds, and even a small urban garden.    The interiors were modern, yet warm and inviting. 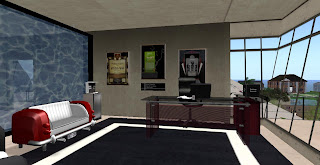 While I was there I ran into Sandi Glas, who has been a long-time supporter and builder.   She had also been associated with the Frank Lloyd Wright Virtual Museum.   Sandi has participated with the VMA since its beginning.  She told me she competed in their first Build-off and has continued to compete in all of them except the “green” build-off.   But she jokingly said that everything she builds has a 0 carbon footprint.

The next Build-off is scheduled for March 1, 2013.   Djinn Dasmijn will be announcing the theme soon.