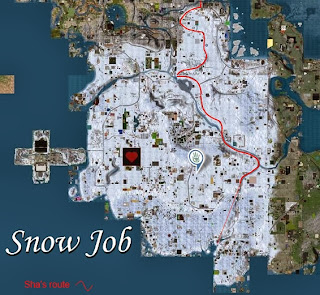 The Southwest portion of Sansara, the original mainland, is all covered in snow, year round. I confess, having lived one third of my real life in Northern climates that get plenty of snow, I only like seeing it on Christmas cards now. However, the mainlands also feature roads that span great distances and this was something I wanted to experience and write about. I decided it was time to plot a course and see what I might discover. I started North of the snow lands and planned on following a road, all the way to the South end of the continent. This trip would take me through 20 sims; Whiskey, Steamboat, Jernberg, Rothenberg, Monti, Mieto, Koss, Zermatt, Moritz, Wengen, Oberstdorf, Valmore, Eagan, Heaton, Ohno, Skari, Benham, Okemo Gorge, Okemo Canyon and Nakiska. The one thing I expected to see lots of was whiteness. As an artist, there are two things I really like about white. It contains all the colors and a new sketchbook, with all white pages, has the potential to include any picture that could be drawn. In keeping with the white theme, I wore white clothing and hair, and, not knowing what road conditions I would find, road my white horse.


I began my trip by a TP to Clarksburg, just North of the snowlands. As I turned South, to start my trek, the first thing I see is a warning sign; BRIDGE MAY BE VIRTUAL. What the fox does that mean? Isn't EVERYTHING in SL virtual? Not wanting to risk begining my adventure with a dip in the icy river below, my horse and I decided to fly over to the other side. What follows are some highlights of things I found in sims along the way.


In Steamboat, I passed a place called Phantasmagoria Theater. On the marquee, "31 days of horror", suggested that they were doing a Halloween theme, for the whole month. Zooming my cam inside, I see they have a movie screen, for watching videos. Alas, my computer and viewer can't do video in SL, so I'll leave watching the movies to you.


In Rothenberg, I passed a fenced graveyard, with a zombie vault crypt. I didn't see any zombies, but figured October was probably their busiest season and they were off looking for brains to eat. Tip-toed past, a little farther on, I found a LM giver for "Furious" Star Wars Avatars, which I grabbed for later exploration.


In Monti, I spotted a building called 3RG. This place was promoting a new virtual world, called 3rd Rock Grid, which is like SL, but smaller with fewer people. They gave a website, www.3rdrockgrid.com which I went and looked at. I didn't join, yet, but might soon, for a look-see. The viewer needed for 3RG is "Cool VL Viewer", which works in SL as well. I downloaded the viewer, to see if it worked on my computer and it does. I've been exploring SL for almost 4 years and have barely made a dent. It's not likely that I'll be going to 3rd Rock soon. 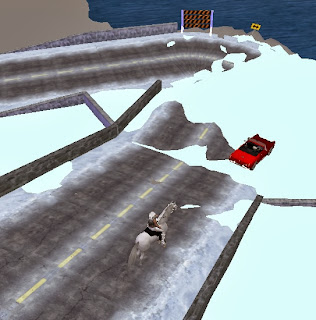 All along my route, I was often passed by driverless cars and trucks. You can click these and ride them. I assume they take you on a pre-programmed route. In Koss, I came to an intersection that was covered in snow and the driverless vehicles were having trouble getting through. I was glad that I had decided to travel on horseback. I paused to take a snapshot of a red car, that was stuck and spinning it's wheels, before continuing on.


I have already tried and enjoyed downhill skiing in SL, so it came as no surprise, in Moritz, to find a ski lift that gives free skis and poles. If you haven't tried this before, I highly recomend it. In this sim, there is a rail station, giving free rides. The tracks followed my route from here on.


In Eagan, I saw a sign that said REZ ZONE and a map of a scenic side trip. I assume the rez zones were so you could rez your vehicle of choice. Here's the map. 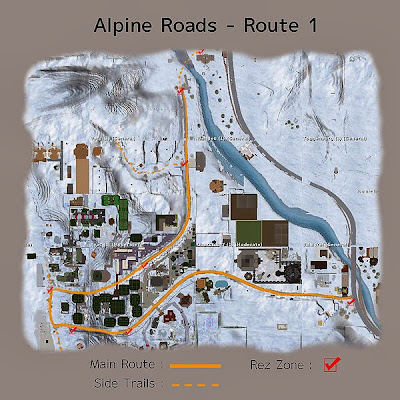 In Ohno, aside from the unusual sim name, they had a shop that sold ice skates and rinks, but my horse said they were too hard on his ankles, so we continued on.


In Benham, the road came to an end, leaving the train or flight as the only way to get through the last three sims on my itinerary. We took to the air, for a birds eye view, but saw nothing to attract our attention. With that, my horse started mumbling about some cute philly, he saw several sims back and that maybe now would be a good time for me to check out that Star Wars shop. I had to agree, after this much snow, I needed a cup of hot chocolate, by a warm fireplace.


Becky "Sha" Shamen
Posted by Bixyl Shuftan at 6:00 AM