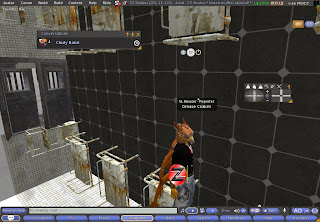 Halloween is the time for ghosts and goblins and trick and treaters. Most everyone finds a costume to celebrate the spooky time of year. But for ZZ Studios, the furry adult themed movie studio, they plan well ahead of time to create an excellent haunted house to scare the skin off your bones. Cindy "Zig Zag" Babii, the main skunk of ZZ invited me down to check out her haunted house at http://maps.secondlife.com/secondlife/ZZ%20Studios/113/119/26. Her Haunted house is featured in the SL group Top Haunts. For the past few years Cindy Babii and her amazing staff have put together a great haunted house.

Last year it was a fun zombie hunt as the zombies could actually kill your avatar. There was an also a great madhouse to get lost in with very good sound and visuals. A lot of the hard work and credit goes to Darkefur Fraker a long time fox of SL and a super builder and scripter. Cindy also gives credit to herself, Rhin, Jeremy, Hojo and Kehf. Their hard work also made the haunted house spooky. This year you got to download a HUD to change your windlight settings along with a flashlight. Some areas turn off your flashlight depending on where you are. The inside of the madhouse looks a lot like a horror movie environment.

Keep your eyes open as there are special effects that you might see in a movie or just random goings on like a TV suddenly turning on or a piece of furniture on you. Cindy had this to say as I was exploring the sick madhouse, "I’ll give you a min to change your pants. (giggle)"

Some of the effects certainly were scary. Last’s year madhouse was more like a maze to figure out how to get to the top with a glass maze to confuse you. This time around Cindy and Darkefur put more energy to make it scary.

I told Cindy that she should get an award from top haunts for the quality of her madhouse. She had this to say, "We're usually top haunted house for SL though traffic wise." I told, "By the look of it I think you should get an award Darkefur and the ZZ staff did a great job." Cindy, "Thanks hun."

Like last Halloween ZZ studios model trading cards will be given out through random givers. I was one of the trading cards the previous year with Justin Foxchase. Sadly however I missed out for 2013 and I missed my chance to be on one of the cards. There’s also an impressive sharknado and some tentacle beast at the beach in ZZ studios. It doesn’t look safe to swim in these waters. 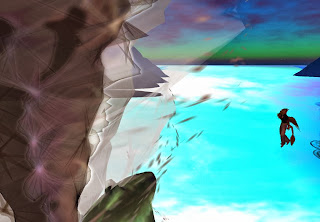 Cindy also welcomes humans to ZZ Studios to check out her haunted house and her very own sharknado.

Seeing the pictures is one thing. If you need a good scare stop by ZZ Studios’s Haunted house and get a good scare. A change of pants or underwear not included if something scares you. Cindy says it will be up for a few days past Halloween so there’s plenty of time to stop on by and get chills and thrills.