When the fire station first came on the scene, I suggested that one of the reporters might want to do a story about it. Now, some time later, it would seem that, from personal experience, this reporter was best suited for the assignment.


Our story begins with Sha, taking her dirigible out for a spin around the Sunweaver Estates. Off in the distance, a red spot approached. Up close, it became obvious that this was a super hero, who's identity will remain a mystery. He hovered, just outside the helm of my ship, and we chatted. He got invited to see the house I own, on the nearby sim. Becoming friends, he visited several more times I learned about his alts and a bit about his real life. You will more often find our hero in either Bob Marley, Albert or Albe mode. We'll call him Bob from here. 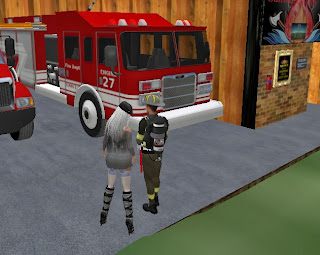 In real life, Bob is a fireman in Northern Italy and speaks Italian. When talking in local chat, his translator converts the Italian into English. In IMs, we have to try understand each other's language. Like most Europeans, he can speak some English. On my end, I bought a Italian/English Dictionary. Bob admired the community spirit that I showed him and asked about rental prices. Soon after, he had picked out a lot and had his first house in place. It rapidly evolved as a home, until one day, when it changed from being his private residence to the community fire station. In admiration for his community spirit, I donated a new fire truck to the station. We had many chats about community. When I mentioned writing about the Oneness Principle, he asked, "What mean Oneness?"  I said, without looking in the dictionary, "In Bob Marley speak, One Love".


The sim owner, our beloved "Big Mama" Rita Mariner, has played a big part in this community evolution. She, and other residents, have made Bob feel at home and appreciated. As the fire station evolved, using translator, I was able to teach him how to make a custom beach, out back. Recently, Bob announced that he and Chicababy were going to set up house together. Add to this, his account contract with SL was almost at an end. He didn't think he could afford a house and a fire station, when his remaining 5 weeks were up. Not wanting to loose this asset, I instructed Bob that the only dumb question is the one you forgot to ask. To be a hero, he should go and talk to Rita, in person, and see what she would do. Following this intuitive advice, he talked with Big Mama. To our delight and the benefit of the community, Rita is changing the rent, for the fire station lot, to L$1 per month. 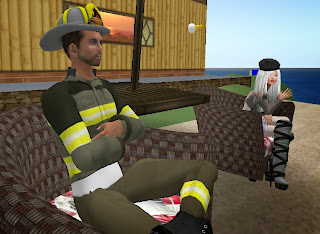 With this turn of events, it was about time for a report in the Newser, so I interviewed Bob, on the beach. We had all just lived through the experience of the Principle of Oneness at work in SL. To assist further, I sent Rita a folder containing, full perm, Fire helmet and mesh male and female fire jackets, which she may sell and distribute in any way she likes.


As if this "Happily Ever After" wasn't enough for one day, I had two other joyful experiences, the same day, in real life, I got to see my daughter, Rachel, for a bit and I had a phone chat with a lady that would like to share an apartment with me.


Rolling up a hose, we pause to invite everyone to see the fire station that Community built,