Before exploring and writing about adventures in Second Life, one must first discover that they exist and where they are located. The best tools, I've found, are the Destination Guide at secondlife.com and the World Map, found at the website and also within the viewer. Both of these tools played a part in finding the sims for this article. My home in SL is on Sunweaver Bay, which is on the West side of a collection of 8 connected sims. There are two maps available in the viewer. The mini-map is like a people radar, showing nearby avatars as green dots if they are at the same elevation as you. If they are at a higher elevation, the dots turn to ^, if lower v. If the dot is a friend, the radar blips are shown in yellow. The radar also shows, in low resolution, objects and builds and ground texture. Most objects are black, but the ones you own are shown as blue. The Map does not give accurate locations of avatars, because it is not updated as often as the mini-map, but does give a better look at the sim detail. When zoomed in, it is like viewing the sim from an airplane. When zoomed out, it is like a satellite view of large areas of SL. If you know the size of a building, you can find the distance to any point on the sim. Knowing that a sim is 256 meters square, you can find the distance to other nearby sims. 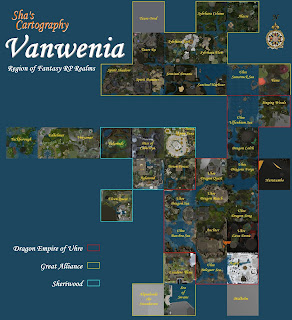 Using my map, I discovered a large group of connected sims, which were only 1.75 miles West from my home. I made a mental note to go and explore them, at a later time. As I looked for my next place to explore and write about, I opened the destination guide, in the "Fantasy, Adventure" category. In the list provided, four of the places turned out to be located in the same area I had found so close to home. Naturally, I decided it was time to explore them.


Before going to visit, I like to make a detailed map, to help find my way around and then use as an illustration in the news article. To make the maps, I first zoom out to show the whole group of sims and capture a screen shot, to use as an index. Then I zoom in, for greater detail, and make shots of each of the sims. I then combine them all into one big map, using the index to get them back in the right locations. These large maps are way too big to upload inworld, because SL limits textures to 1024 pixels in height and width. To upload them, a copy has to be resized, so that neither dimension exceeds the limit. On each map, I place the name of the area, such as Blake Sea or Caledon.

For the name of this 39 sim area, I searched, but could never find a name for the collective area. In getting to know the people and places, I asked everybody I met if they knew the name. None of them knew the answer. I got invited to a party, where I met and friended the king of Asgeir, who's name is Asgeir Askvigg, I asked if he knew the name. He said it didn't have a name, so perhaps I should be the one to give it one. With this in mind, I began thinking of names that might fit the overall theme of the area. Several names came to mind, but I kept asking each person I met if they knew the name. On Elven Quest, the last of the sims I explored, I met a Lady elf and had a long chat with her. She explained that, originally the sims were organized by "The Builders of Arda" but over time they had become less connected to each other. She suggested that perhaps some Elven words might make a good title, like Vedui, Vanwen (greetings, hello). Having found all the people friendly and helpful, I thought that was a great idea, so I named it "Vanwenia,"  meaning "hello place."


Vanwenia is made up of several realms and a few individual, residential sims. The largest realm is called The Dragon Empire of Uhre and is loosely based on E.E. Knight's 'Age of Fire.' Kingships are on a per sim basis. I met and friended two kings, Cromm Slade of Dragon Lolth and Asgeir Askvigg of Asgeir. Cromm's wife, Eva, is Queen of Singing Woods and there is a bridge connecting their sims. Dragon Lolth and the Empire of Uhre, shown outlined in red on the map, were the first sims I explored.

Sometimes I walked, or flew, from sim to sim, but to save time, I usually used my map to TP. The first time I TPed to Asgeir, I found myself on a large, flat ground, covered with grid lines. In my radar, I saw a green blip approaching at great speed. This turned out to be a lady named Armix Portal. She seemed very upset that I was there, asking, "How did you find this place?" and "Who gave you the LM?" I was not on the ground level of the sim. It was a sky platform, with a template texture, that she used for building houses. When I explained who I was and that I was writing a story about the area, her mood became more friendly. She TPed to the ground and sent an offer to TP to there.

It was Armix, the next day, who got me invited to a party. There I met the king. Asgeir is a viking themed sim, with snow covered ground and log buildings. It was late night, when I was there, and nobody else was there, so I took a quick look around and headed to the next sim. To the West is Uhre Belegaer Sea. On the map, I noticed that all of the sims in this Empire are connected by water routes. I could have rezzed my sail boat and toured them all by water, but, already dealing with lag, I decided to fly north to Uhre Lava Dome. 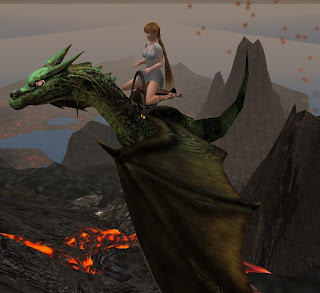 The ground at Lava Dome is all black, basaltic rock, with rivers of molten lava and multiple volcanic cones. I flew around, selected the tallest cone and headed for the top. Remembering that I had chickened out, on my Route 66 tour, I decided, this time I would land in the caldera. As I stood on the boiling magma, I noticed a large, green, sculpted dragon was begining to take shape. It was standing in front of a cave entrance, with an iron gate protecting it's contents. Thinking that the dragon would be no threat, until fully rezzed, I tip-toed past and clicked on the gate. That action put me right inside the dragon's lair. The walls and columns were richly decorated with scrollwork and the floor was covered with gold nuggets, coins and colorful gems. I expected to find a prize here, but a quick inspection revealed none, so I went back out.

Now, standing behind the dragon, who did not seem to notice me, I saw that he had a saddle on his back. I clicked on it and found myself mounted in the saddle. The page up and down and arrow keys gave me full control of my new steed. Within moments, after take off, I realized a photo of my flight would go perfect with this article, so I paused and posed for the camera. I began to wonder if the dragon was able to cross into other sims, or if it would poof at the border. Nothing ventured, nothing gained, I had started out on foot, so headed for the border to test my theory. The dragon made it across the boundary, to my delight, so I used it for a dragon's eye view of several more sims, pausing here and there to zoom my cam down on points of interest.


The total area of the lands I call Vanwenia is around two and a half million square meters. It would take months to get to know the lands and people. The scenery is some of the richest I have ever seen and it is dotted with more unique castles than you can count. The people are as varied. It's like being in the places in a Tolkien book. All of the people I met and talked to were friendly and helpful. I asked many questions regarding the divisions of Kingdoms, Realms, Empires and Alliances, but this Gordian knot awaits an Alexander to cut through it.

On the map, I have outlined a few of the realms, to give a rough idea of them. I pray the residents will forgive me, if I have got a few lines in the wrong place. The same goes for the names of each of the sims. The names used on the map came from the destination guide, but the residents may have their own names for them. An example of this is Asgeir, the Viking sim, which is known to the locals as Midgard, or the Northern "Great Alliance", parts of which are called the Torgan Kingdom. There are many groups that can be joined, such as Knights, Rangers, Mages,and Healers. You can engage in combat RP, or stay neutral. There are a variety of avatar types to be found, but note that furries are permitted in some areas, but not all of them. My advice is, until you've learned the rules, keep your visor down and your ears and tail tucked in.


I had a wonderful time exploring and can assure you, if you have a taste for fantasy, in this place, you can live Happily Ever After.