Lionheart Estates - Forward to the past 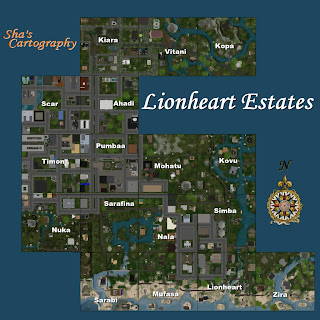 So far, I've explored sims and introduced you to mermaids, pirates, knights and dragons, and ways to create your own fantastic journeys in Second Life. The most fantastic thing about this next group of sims is, you won't find anything magical or imaginary. In fact, touring here may remind you of your own, real life home town.
I found Lionheart Estates in the destination guide, under the miscellaneous category. They said it was a continent, but as I looked at the 17 connected sims on the map, the first thing that came to mind was that it looked like it was about the size of the area I could explore, on foot and bicycle, as a youth. To this day, I still enjoy going on day trips, to explore my local areas of interest, on foot or by using other means of transportation that are available to me. Planning a visit to these estates brought out the adventurous inner child in me. For this trip, I planned on using, in addition to walking and biking, my horse and a new antique 1912 Renault CB, which I bought at the Titanic sim.

secondlife://LIONHEART/104/104/22
This group of 17 contiguous sims is located on the farthest western part of the SL world. More than 55% of the areas are public, protected land with waterways and lakes, streets, paths and railroads, natural parks and scenery. The above SLURL takes you to a landing point on the Lionheart sim. From there, go North, up the stairs and turn right. There, you can rez a free bicycle or a golf cart that seats four. They will last, as long as you stay seated on them, but will quickly vanish if you get off.
To the East, is the sim called Zira, which is all residential. I sent my camera in to have a look around. On one lot I spotted a Gypsy wagon, suggesting a liberal building code, as long as you keep paying the tier.


Heading North to Simba, there is a dock where you can get a motorboat, to tour that sim and Kovu by water. Like the bikes and golf carts, the boat poofs when you get off of it. I used my car to tour the other sims at this latitude, Nala, Sarafina and Nuka, noting the beautiful public parks found here, with their magnolias and weeping willows. They used fewer sculpted prims in Lionheart than in the previous group I had visited (Vanwenia), so there was also less lag to deal with. While in Sarafina, I paused to make a photo, in the park, to show off my car. 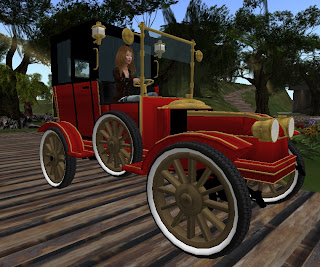 Now, after having seen about half of the million plus square meters of Lionheart, I opened my map, to see which direction to proceed. I noticed the ground on the Northern sim of Kopa appeared to contain mountains, so made a TP to it, planning to continue from there, south. Sure enough, there were mountains there. which, in addition to being scenic, also served as privacy walls between homes. Each home was in it's own little valley. In one small valley, I checked out a mission chappel, with a half dozen tombstones on the grounds. Heading West, through Vitani to Kiara, the scenery becomes progressively more urban. In Kiara, I spotted another church, which, true to my nature, had to be explored. Inside, the first thing I noticed was the alter was at the north wall, with a cross above it, with a body on it. This told me that I was in a Catholic church. Zooming in on the alter, I see the cards with prayers are written in Latin, which confirms my theory.

On this sim, I saw one of the most unusual structure in all of the estates. It was a stone home, built on two legs, one a natural stone spire, the other of masonary. From here, I headed South and zig zagged my way through the commercial, "downtown" sims. I started this area on horseback, so I could ride on sidewalks, avoiding robotic traffic, which doesn't stop for pedestrians or slow antique cars. In Ahadi, still on my horse, I zoomed my camera inside of the Locutus Watanabe's clothing store and saw a prize chair with the letter "B" on it, with only a minute left on the timer. Without first dismounting, I clicked on it to "sit here" and me AND the horse sat on it together and won a black dress. He wanted to share the prize, but I told him it wouldn't fit and offered him a beer instead.

Leaving that shop, I spotted another sim, across the street, called "The Frame House". Inside, the walls were covered with many ornate frames. I wasn't interested at first, because I had many picture in my house and was near my prim limit. Then I noticed that the picture in the frames kept changing, like a slide show. A sign informed me that one could put their own pictures in the frames and they would show, in slide show manner. A light bulb lit up above my head. If I had one of these, I could free up many prims in my house and put in some favorite furnishing that I did not then have room for. All of the frames were $200 each and I'd only need one, so I picked my favorite, bought it and went home. Now, most of my art and photos of friends are in one frame and I have added my pipe organ to the music room again.


After putting my house in order, I returned to my exploration of Lionheart in the exact spot where I had left off. To my great delight, I discovered that my favorite shoe store, Bootgasm's, has a branch here. They have a large selection of shoes and boots, but not near as many as the main store, which also has a clothing department and some prize chairs. Thanks to their prize chairs, I have, by far the largest folder in my inventory, 49 pairs of boots and shoes from Bootgasm, which dwarfs by comparison my next two largest folders; Bad Kitty, with 23 items and Sirena's Hair, with 19 hairs. Perhaps I should write a fashion article soon (grin).


Moving on, I next discovered a night club, called "Hot Licks Rock Club." The decor reminded me of the Hard Rock Cafe, several of which I have worked shows in, in real life. I arrived there at 10:45pm and there were a half dozen people there, so I assume it is a popular hang out. There was also a stage, with a drum set on it, so they likely also feature "live" shows. I spent some time there, chating with the folks, asking if they knew of other places of interest on the sim, but like most club attendees, they only know about the club and not the surounding area. Across the stree from the club, I found a large fire station. Having donated a fire engine to the fire station on Sunweaver Bay, I like to see how others have built theirs. This one had four vehicles; a tanker, fire engine, ambulance, and entourage car.


Turning West, I entered Scar and found a shop called "Dekute Dekore", which sells low prim, animated furniture. They also have a kid's department, with scaled down items. I saw a full kitchen, with animations, made of only one prim. Upstairs, I saw a bedroom suite, called "Urban Grunge", that had a mattress on the floor and a bookself made of cinder blocks and boards.


On the map, you can see that the four southern sims have a beach connecting them. I decided to complete my exploration with a stroll on the beach. Along my way, I saw a small chappel and went in to look around. It wasn't ornate or richly furnished, but on the front riser there was a small sign, which I zoomed in to read. The sign said, "Click here to receive Jesus." Laughing out loud, I just had to see what that was all about, so I clicked it. Sure enough, I got something, but I'm not going to tell you what. If you want to find Jesus, you should go to Lionheart and find him for yourself (smile).


Becky "Sha" Shamen
Posted by Bixyl Shuftan at 6:00 AM