By Grey Lupindo
While I was sailing a few days ago, I found an interesting pirate exhibit on a pier in Snug Harbor.   I quickly learned that the exhibit is part of a larger museum being constructed at Snug Harbor Maratime Museum, SH 2 (92, 188, 22).   The landmark describes the site as "A mini course in boating history and real life facts about boats." 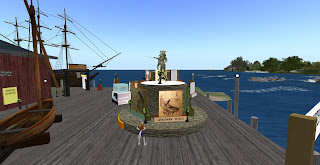 The exhibit is a huge outdoor museum that is still under construction.  However, there is already a wealth of material about every aspect of ships, from the mechanics of engines and anchors to the people and how they lived aboard these ships.   There’s even a 16th century Galleon that you can board and explore.


I found the pirate exhibit to be the most interesting.   This exhibit has drawings and notecards with information about many different pirates, both male and female, from many different countries.  Some of the names were familiar, but there were many pirates that were new to me.   Sometimes one country’s “pirate” is often another country’s hero.


The museum gives an interesting explanation as to why a person would turn to piracy as a career.   A sign explains that "In the 1700s for many sailors the prospects of sharing in a big haul was overwhelming.  When a man could be a pick pocket and be hanged for stealing a shilling, why not be a pirate and steal a fortune?"   Sometimes, it seems, crime did pay. 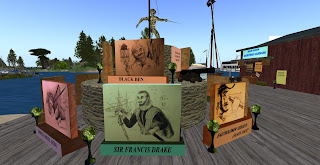 One of the famous women pirates was Lo Hon-Cho, a Chinese woman who is said to be the inspiration for the Dragon Lady pirate in the comic strip "Terry and The Pirates."   In 1921 she became a pirate when her husband died and she took command of his pirate ship.   She was very successful and grew the business into a fleet of 60 pirate ships.  She was also very ruthless and took women and girls as prisoners to sell as slaves.


An American woman pirate from an earlier era was Rachael Wall.  She went into the pirate business with her husband, George Wall.  Her skills are detailed in the notecard available at the site.  In 1782 her career as a pirate ended when their ship sank in a storm.  Later, after being arrested for robbery, she admitted she had once been a pirate.  As a result of her confession, she was the last woman to be hanged in Boston.


Piet Hein was a Dutch hero but considered a pirate by other countries.  In his early 20s he had been captured by the Spanish and held as a slave for four years.  After his release he became a privateer for the Dutch West India Company and captured many ships.  Later he became an Admiral and captured a Spanish treasure fleet loaded with silver from the American colonies and the Philippines without any loss of life.  Following the Dutch policy, Hein gave the Spanish crews enough supplies to reach Havana and released them. The treasure Hein captured was the company's greatest victory in the Caribbean. 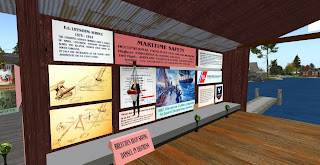 The Maratime Museum has informational notecards about all of the pirates, including Englishmen Sir Thomas Cavendish and Sir Francis Drake, Indian Kanhoji Angre, and many others.  The notecard about Jean Lafitte offers an interesting look at a man who was a pirate, a hero, and a savvy businessman who chose piracy even when other options were open to him.


There are exhibits on modern day pirates, too, and the U.S. Navy’s reaction to it.


When you visit the museum, be sure to turn on your music.   The site plays shanties and sea sounds.  I heard "Whiskey Johnny", "Wild Goose", "Blood Red Roses", and "Hilo Jonny Brown".  There’s even a notecard that explains the different types of shanties and why they were sung.


Of course no pirate exhibit would be complete without rum.   Located on the pier is Barnacle Ben's, the place for you to “rest your timbers” after a hard day of sailing.


For sailors, Snug Harbor can be reached by water.  The dock at Snug Harbor also allows you to moor your boat for an hour or so while you visit the museum.
Grey Lupind
Posted by Bixyl Shuftan at 6:00 AM