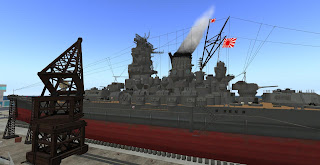 The Yamato was the lead battleship of the Imperial Japanese Navy during World War II.  Along with her sister ship, Musashi, they were the heaviest and most powerfully armed battleships ever built.  A replica of the famous battleship is being constructed at YAMATO Memorial (223, 56, 22). The note on the LM states that this is a realistic tribute site.  Along with the Yamato, there is the Akagi, a Japanese WWII era aircraft carrier, and an aircraft factory.


The Memorial is owned by the Yamato Factory, a private SL group.  Its founder, resident Kody730 Radek, has been in SL since 2007.   Another long-time resident, Kundali Jun, is also involved with the project as a builder and as owner of the aircraft shop. 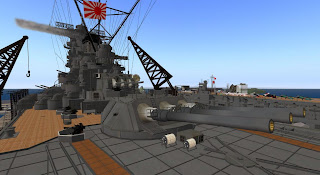 The landmark places you across the road from the ship yard and in front of a visitor’s center.  Inside the center are photographs of the RL Yamato.  The SL replica is an amazing replica of the huge battleship, including its armament.

The Yamato is placed as it would have looked while being constructed at Kure Naval Arsenal in Hiroshima, Japan in the late 1930s and early 1940s.   In real-life, the dock had to be deepened and a huge crane installed. The gantry crane is in place at the SL site.  The scale of the SL site is huge, too.  I quickly tired of walking and began flying in order to see the Yamato and other ships and planes that are here. 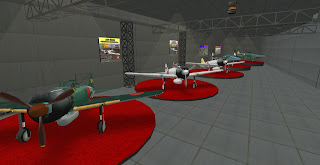 The point of having a massive warship is that it can be heavily armed.  The real-life Yamato had nine 18 inch 45 caliber naval guns, the largest ever used on a battleship.  There were also twelve 6 inch guns that were placed in sets of 3 in four turrets, as well as anti-aircraft and other guns.  Similar weapons are also on the SL Yamato.


There are also replicas of many WWII era planes, some of which are for sale.  There is also a Macchi M33 on display, which is an Italian racing sea plane of that era.  Inside the aircraft factory are some uniforms for sale too, plus a freebie sailor's outfit. 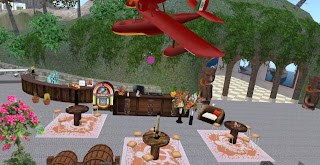 On the second level of the Visitor’s Center is a garden area with tables and chairs, a juke box, and dance balls.  Interesting aircraft are on display here, too.
The real-life Yamato was commissioned in 1941, shortly after the Japanese attack on Pearl Harbor.   Although it was present at some battles, it only engaged in battle one time during the Battle of Leyte Gulf in Oct 1944. In April 1945, The Yamato was sent to help defend Japanese forces on the island of Okinawa in Operation Ten-Go. American planes repeatedly bombed and torpedoed the ship, until it finally sank. After the battle, what was left of the Imperial Navy was unable to launch another major operation. "The word Yamato was often used as a poetic name for Japan. Thus, the end of (the) battleship Yamato could serve as a metaphor for the end of the Japanese empire."

The sim is part of a group of sims, some also having aircraft, ships, or both. South of the battleship is mostly empty land. So maybe there is more to come for the Yamato in Second Life.

Note:  Information used in this article came from Wikipedia.