Twelve years after the worst terrorist attack on American soil, Americans and friends of continue to reflect every September 11th. Second Life didn't exist yet then the attack took place, except as a very early alpha version closed to the public. But once the Grid began getting a sizable population, it would be a matter of time before memorials were set up. They went up as early as 2004 (Link).

Over time, there have been numerous memorials. One of the largest was the September 11th Memorial by Liam Kanno (Youtube link). One that got the attention of CNN was the World Trade Center Memorial in the New York City Block sim, built by Cheri Bing whom in real life was a resident of Brooklyn (link).

These and others have disappeared over time, vanished into the virtual nether as real life dragged the sim owners out of the Grid or the sim had a change of managers. The World Trade Center that once stood on the New York NYC sim was  no longer there when Second Life Newser looked earlier this week. But there are still a number of memorials large and small on the Grid. 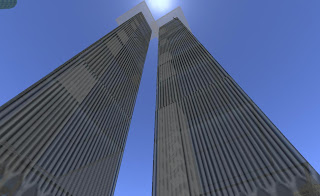 The largest and most popular memorial currently in Second Life is the 9/11 Firefighters Stairclimb Tribute at Areo Pines Park. The build consists of several fire trucks, and a huge transparent build of the World Trade Center Towers. Visitors are encouraged to take and wear a fireman's jacket and gear, and make the climb up the 110 story building. There is also a Sept 11 documentary playing. More about the memorial can be read in this 2011 article. One can also read about stairclimbs in real life at  http://9-11stairclimb.com/ , or donate to the National Fallen Firefighters Foundation: http://firehero.org/donate/. 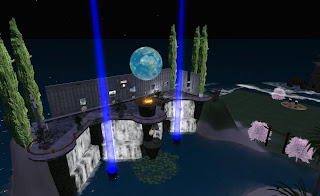 One place of remembrance is set in a sim with a  name not usually associated with reflection: Stagg Island. There, walls of marble show the names of the fallen. There are also two beams of light shooting into the sky, which look quite striking when viewed in midnight, in which lights illuminate the walls and the waterfalls underneath the memorial. A bell to ring for those who perished is available to pick up. 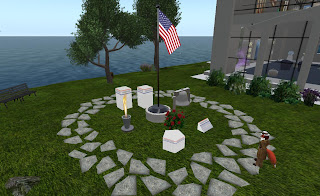 Using Second Life Search, I found three other memorials. One was at Learning Virtuale. This was a small simple memorial with a flag and small builds representing the twin towers and Pentagon. Touching the tower gets a notecard and a number of freebies, including a handheld flag , a bell, a rosebush, and a shirt. Reading the notecard, "… Rez and touch the enclosed bell so it rings in honor the nearly 3,000 people who were lost on 9-11-2001 and the many that were lost in the subsequent war. The bell can be copied and modified for placing in multiple locations in various sizes …) 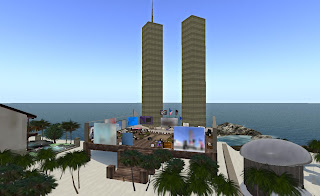 The second and larger of these new memorials was at McCoy Island. This was a social area in addition to being a memorial with a danceball set up, and there was some kind of sign for a "Monkey Spanker." But the majority of the place was for respectful reflection.

Songs like "This is How The World Ends," played over the radio. In the middle of the floor was a mat with numerous labels crossed out, leaving only "We the People." There were numerous pictures around of the disaster, reflective artwork,  and people connected to it. In the corner was a flagpole, of which the flag would periodically change from one country to another whom lost people in the attack. There was a free gift box, with a tattoo, jacket, swimwear, sunshades, and a poem. There was also a gift chair for "sale" for 0 L. 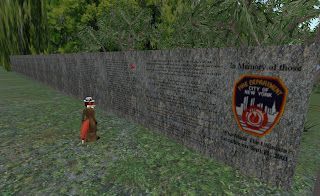 Lastly at Que'ellar d'Uriza was another simple memorial. Consisting of just a stone gray wall, it was easy to miss looking at the area from a distance or while rezzing. At one end is a badge insignia of the Fire Department of New York along with the words, " In Memory of Those Who Made The Ultimate Sacrifice on Sept 11, 2001. The wall had a list of those firefighters who perished that day, along with the "Fireman's Prayer."

The search for locations also revealed some groups, including some "Truther" conspiracy groups. That so much devastation that shook the whole country could come from just nineteen fanatical nobodies from a third world area is unbelievable to them. To them only an evil conspiracy from within our borders could have done this, nevermind their theories have been debunked again and again.  Other groups are simply for people who still mourn and remember to talk to one another, where they will always find sympathetic ears. One group was for avatars who first came online at Sept 11 for "people who are concerned with the proliferation of 9/11 awareness."


Over time, I've talkd to some Second Life residents from New York City, and the events of this horrible day will never go away for them. One was a blogger, but told me she could never write anything more than a short post. The memories were just too painful to go through.

Today is not a day for politics …
Today is not a day to lay blame …
Please let today be a day …
For us in Second Life …
To pull together as one …
And pay tribute to those that …
Lost their lives …
Their families …
The Heroes …
The Servicemen …
The many countries for their support.