After visiting Welsh for the previous First Sims article, I was excited and filled with history. It’s taken me a long time to complete this next article in The First Sim series, because Clyde is a sim that has lost most of its former glory and antiquity. In fact, most of it is for sale, and a small part of it has been abandoned. If you are looking for land in the original Second Life™ it might be a good idea to watch the abandoned land. In case you do not know, when abandoned land goes up for sale, it only costs one Linden per square meter. 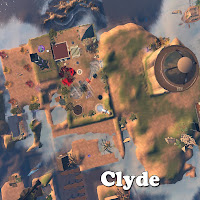 The sim of Clyde was originally part of the first sims that were used as combat sims, until it was announced that just Jessie would be a combat sim. The early residents wanted more lands for quiet living, and Linden Lab repurposed Federal, Hawthorne, Shipley, Stanford and Clyde.

Textures Unlimited and the The Lily Pad Lounge live music venue occupied the sim for many years. The store and lounge were owned by Drift Monde (11/03), who was one of the first and biggest supporters of live music in Second Life™. The lounge remained open until June of 2010, and hosted some of SL’s most famous peformers  such as Astrin Few, Frogg and Jaycatt, and Flaming Moe. The frog-themed décor was one of the drawing points for the place. When it closed, many residents mourned the loss, and it seems the sim of Clyde has never recovered its former glory. 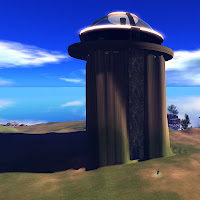 I could only find one resident on this sim. Strider Stirling’s build is a gigantic mountain that has a small opening in its eastern side. Strider was born in July of 2004, making him a genuine Second Life™ oldbie. Despite his age, his footprint in the grid is rather small. All of the searches I conducted for him came up empty, and his in-world profile is pretty vague. The only clue I have to go by is the giant monolithic build that marks his land. I have to work very hard not to comment on this build, as you might guess when you look at the picture of it here.

Inside the mountain there are a few walkways and objects that date from 2005 to 2012. I have to assume that’s he’s been around, and is still in world, but evidence of recent visits is lacking. 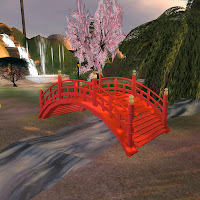 Adolfh Gustafson owns a lot of land on Clyde for Tango in Second Life™ whose purpose is to promote the UNESCO World Heritage dance, and provide a venue for dancing the Tango. I visited the area several times during the writing of this article, and did not find anyone dancing or even hanging around, but I hope that it does happen while I sleep.

The area is worth a visit, because it is pretty and very romantic, with spots to dance sprinkled about. I particularly liked the red footbridge on the land.

Remnants of the Early Days 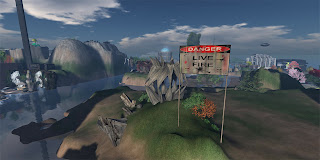 Only the bare minimum of artifacts from the early days remain on Clyde, not counting Strider Stirling’s build. A few rocks and a strange sculpture made by Eric Linden are located on a small hill of protected land. Next to these rocks is a danger sign created in 2003 by Catapult Grimm—one of the Beta Contributers. I got the feeling that much of Clyde had been abandoned, and only few parcels were still active. 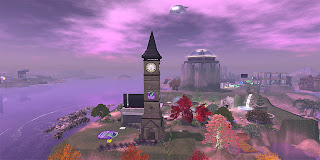 For Sale – Most of  Clyde

The land here is prime, original, historic Second Life™, but seems to be mostly for sale. The land does not seem so empty because the agency selling the land has placed pleasing builds on the parcels. The land for sale by agencies is expensive, but there is abandoned land, and it bears watching if you want to own a piece of lost history.

Watch Astin Few and Flaming Moe perform the first “duet” in Second Life™ at the Lillypad Lounge in 2005: http://www.youtube.com/watch?v=MDcNoBcY_TE