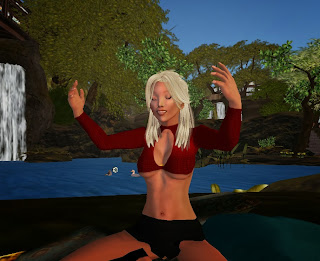 In the previous article, I wrote that Tempura Island is, "one of my most valued LMs." To be more accurate, I should say that it shares the number one rank with "The Forest." In writing these articles, many old memories have been brought to light. Piecing these together has not only aided in writing these stories, it has revealed a hidden back story, that answers certain questions. Why do I love these sims so much? Why does a person that has no interest in meditation, in real life, place so much importance on it in SL? Have I been hiding something important, from myself and others? I find that it is impossible to continue extolling the virtues of these sims, without first revealing a bit of my own history in SL.


It is no secret that one of my first jobs in SL was as an exotic dancer. No doubt, at that time I was learning the errors of allowing the purse to overrule the demands of the soul. One night, as I danced on my pole, I met a man named Shanti Bright. He was a photographer and lived in France. We became friends and set up a photo shoot. When he opened a photo gallery, I was invited to the grand opening, met many of his European friends and became an international celebrity. I was invited to attend weekly group meditations, in the garden of one of his lady friends. Before and after meditating, we conversed, mostly in French and Spanish. This was a great delight for me, because my family originally comes from France.

When the group hostess left SL, Shanti and I began finding other locations to have group meditations. Other members of the group were hit and miss, but Shanti and I continued to meet every Sunday, at noon, for years, at the Forest sim. Initially, we met at the central meditation area, which seats four. On weekdays, I explored the rest of the sim and discovered several private meditation spots. Eventually, we chose a wooded hill, on the Northwest corner of the sim, as "our place." We knew each other's real life names, shared our real photos and even spoke on Yahoo messenger, when he tried to teach me Esperanto. And even though the technology does not yet exist, I think we could even smell each other.

When Shanti moved, from his country home to the, for him, big city of Clermont, he became progressively involved in local business and government. The day came when he announced, he would no longer come play in Second Life. I think you can see why the Forest is more than just another sim to me. It is the place where love grew.


Allow me now to tell you of the wonders you will find, when you visit the Forest. On arrival, it may take a couple of minutes for all the sights to rez, but your senses will already be treated to the sounds of peaceful music and the abundant wild life. Everywhere you go, you will meet animals of all kinds, roaming freely about the sim. You can fly here, but the forest canopy is to thick to spot landmarks from the air. It is much better to just walk around, in what ever direction your eyes take you.

Regardless of what direction you go, there will be something wonderful to find. There are fewer people here than on Tempura, so the lag is also less to deal with. There is every kind of tree and plant imaginable and they have a doorway to a shop where you can buy them, for your own home or sim. If you see a harp, sit and play it. I bought one there, for my house, and everybody that visits loves to try it. There are a number of meditation spots, as well as Tai Chi areas. There are also many romantic places for couples to sit and chat. It's a great place to bring a friend or lover and make a good impression on them. If you go solo, you will not feel alone. Anybody you meet here is sure to be friendly and open to chatting and exploring with you.

The Forest is not static. The hills and vales stay the same, but the trees, flowers and structures are often updated, an artwork in progress. If the pressures in the real world or Second Life are wearing you down, a visit to the Forest is like a return to the garden of Eden and will heal your soul.