The following was originally published in Second Life Newspaper on April 23, 2010. 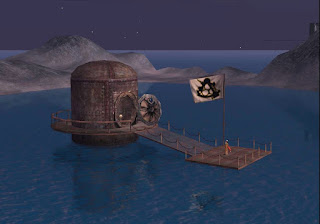 Those with a fascination for Steampunk, fans of the classic novel “20,000 Leagues Under the Sea,” or even just a simple interest in either, may want to head to a certain place in Second Life: Nemo.

The entry point is a metal platform, with a walkway leading to a metal tube poking up through the surface, a doorway open and leading to an elevator. One can take the elevator down, and find oneself in the middle of an undersea city. The structure is done in the style of the Victorian era, but with strange machines mixed in. Near the entrance is a model of the complex, which can help in seeing where one can go while down there. There is also music in the background, which was a bit haunting at times when I was there. 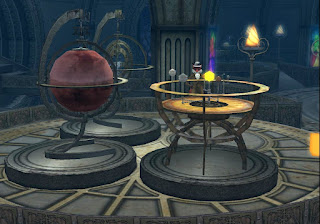 The underwater complex is well detailed. Some rooms are simple living quarters in which one can sit on a couch by an amp and read the books of the day. There is also an occasional portrait of a notable person, appropriate to the setting, at the time, such as scientist Nikola Telsa. There is also an organ in one

In other places in the structure, one can look at electrical and plasma-filled equipment fit for a mad scientist’s lab. There are robots in the place, resembling sea creatures, in various stages of assembly, as well as sketches of the contraptions on the wall. If one looks outside, an occasional working model can be seen moving through the water. There are also other machines for use outside the lab, such as a fortune-telling machine. The machines are done in good detailed, sometimes with moving gears and other parts. 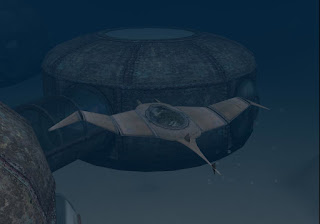 Nemo was built by Sextant Shepard, a French journalist in real life. In the Linden Blogs, he stated he was working on another area, the Oruchalcum Mine. Nemo itself is still a “work in progress,” evidenced by a closed door with a sign at one point.

A fascinating sim that anyone who’s read the works of Jules Verne and H.G. Wells will enjoy.

Someone also did a Youtube of the area, which one can see: Link.

Nemo was one of the last places I would cover for James and Dana's Second Life Newspaper. This sim received a good deal of praise for it's design. It was featured in the destination guide and mentioned by Linden Lab as a key place to go to. More was built after the article, including scenery above ground, so I went back to see the new additional areas. Sadly, it didn't stay up for very long. In a matter of weeks, it was gone. I would go back once more for a few more pictures before it faded away.