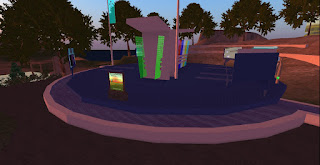 Mauve is a quiet and peaceful place to be when you want to get out of the whole large crowd scene of Second Life. It's simple, relaxing, easy to navigate, as well as the fact that it looks beautiful in the different times of day in-world. In the description of the landmark it says about it being able to be a meeting place for events, info, freebies, or even a place to simply hangout. While I haven't personally used it for those specifically save it for a place to rez when I start up the virtual world. This particular sim is apart of the mainland, which I believe is one of the places a new resident is able to start in after finishing orientation / tutorial island; or at least it's where you can come if your new and need info. From my understanding the said information can be found on various boards in the above picture. Whether you want to check out the blog for Linden Lab, a landmark for those newbies around the wonderful virtual world, as well as an advertisement.

If your looking for a real experience then just waiting for people to show up out of the blue, this sim isn't for you. If your the kind of person that likes to wait or has to get some organizing of their inventory done than it is! The two features it includes is that you are able to use voice to communicate with other residents, old and new, as well as the ability to fly around and get a bigger view of the whole area. What adds to the simplicity and helpfulness is nearby locations. Unfortunately you may not be able to access these since some may be homes, or even lands you cannot be on depending on your rating of general, moderate, and adult. This place is supposed to be clean of any vulgar words, or even getting naked like you can in a sandbox. I am not sure if you can get kicked out of the said place if you do  have your avatar naked, but I don't think they'd do it if you plan on putting clothes right away. No one likes a resident in their birthday outfit now do they?

Personally I haven't had bad experiences around there considering it's set as my home location, due to me being a homeless little resident of SL. People usually come and go, whether it's because they are new, or just bored and tping around until they find an awesome sim. As for the loading and rezzing it depends on your computer on how long things will load like objects, prims, trees, and so forth; generally I do not have an issue with waiting for things to load here because of it being not so cluttered and having many builds unlike other places like clubs, homes, shops, and so forth. I definitely recommend checking it out at some point or another. Like I said previously its usually quiet and not action packed like other sims are, but if your wanting to get away and do a bit of a clean up, you can without a problem.

The place is owned by Governor Linden and created by Chip Poutine. Upon trying to look further into information on it there isn't information about when it was created. Although this is only an assumption, it might of been created when Second Life was started or at least someone during the beginning of when it was created and open. At this time of writing the article I haven't been able to locate Chip Poutine inworld, and at the moment I tried contacting him, Governor Linden wasn't online.

BloodyKitty230
Posted by Bixyl Shuftan at 6:00 AM