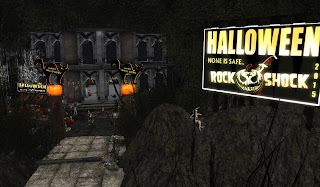 Halloween is here, and time to search for some "spooktacular" places to explore around in. Recently, I took a look at two. They were "Halloween Rock and Shock" at Rebel Yell Concerts and "Deadman's Island Haunted Sim" at Mystical Island.

The main entrance is right in a Pentagram. Nearby is what at first looks like a fairly attractive woman. But get a little close, and she shows a different side, "Happy Halloween!" There are a few spooky displays close by, such as the skeleton music band in the building behind you. 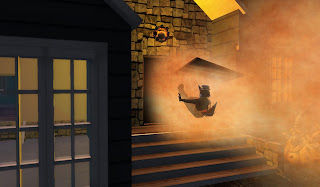 More scares await you as you look around. A road from the entrance area leads to what looks like a small town. Some places you can walk into. Others you're limited to just doing some action at the door. At the later, clicking on the door has random results. Sometimes your avatar will try to peek through a keyhole, then hear a scream. Other times, the door buckles, knocking down  your character. And sometimes there's a ticking noise, followed by a boom that sends your avatar hurtling backward. But you dust yourself off and get back up, shaken by unharmed.

Going down one trail, I came across a spooky dark carriage, fit for a vampire lord. But there was no sign of a fanged bloodsucker. Maybe he went out for a bite. Nearby was a haunted house. Going inside, there were scares just around every corner it seemed. Panning around would help only so much. Some appeared just as you walked by. Definitely something thrillseekers would enjoy.

I wasn't the only one looking around. There were several others looking over the place. Perhaps word had gotten around of the sim's tricks and treats. 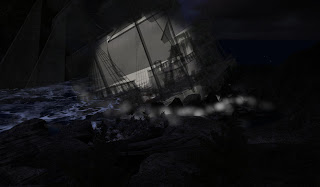 Another place I stopped by was "Deadman's Island Haunted Sim," at Mystical Island. The place had a scare from the start, with an eyeball that tracked your every step when you were nearby. Not too far away is a lighthouse, with a few bodies inside. And where there are lighthouses, there's usually a ship. But what's around is a ghost ship on the shore, a lone ghost pirate standing at eternal guard with a bottle of rum.

Elsewhere in the sim, is an abandoned building some kind. It's lone live inhabitant one sees, a witch busy brewing some potion. But the chopped up body parts suggest it might not be a good idea to linger long. The sponsor of the sim is also having a photo contest, so maybe some of the screenshots here will come in handy.