A Trip to the Amazon: Day One

A few years ago, Linden Lab opened their "Amazonian Adventure," located in what they called "The Wilderness." While reviews were overall positive, some wondered if a tropical jungle area should offer more challenges. One blogger was less than thrilled with it's "silly" animals. And some thought the biggest problem with the area was Linden Lab itself, on some levels, it offered something new, and on others it was more of the same. 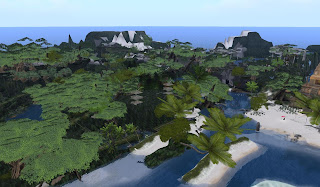 Recently I heard of another Amazon area that's been open to all residents from the beginning, at least those able to access "Adult" rated areas. It's right to the west of the Mama Allpa sim owned by YT Recreant. The main entrance of the several sim area is at Glint (213, 23, 22). Dropping in, the place had a definate tropical tribal feel with several around dressed in jungle native outfits. Clicking around, I was soon asked for permissions for the place to act on my avatar in certain ways. The place was "Experience Keys" enabled. But the entrance was a "Safe Zone," so whatever happened around here, this was a kind of neutral zone. 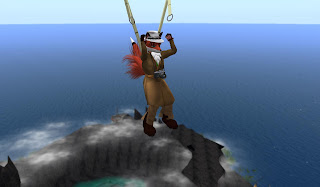 There was a board with teleports to each of the eight sims, Glint, Baia Santa Rosa, Rio Tapajos. Panama do Careiro, Lago Marimba, Nayeli, Rio Solimoes, and Rio Grande. Clicking on one, I ended up in a helicopter high above the sims with the door open. Getting a parachute from the wall, it fitted itself automatically, and I jumped down. At around 100m, I deployed it, and began floating down. 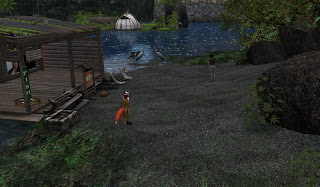 I came down in the  Baia Santa Rose sim next to
a building near the shore. By the looks of things, it was a kind of fishing hut. There was someone there. Chatting with her, she was a newcomer to the place like me. Chatting a little, we decided to explore around together. There was a dormant volcano nearby, so we decided to check that out. Looking around, there were crocodiles around, which we kept away from, and a statue of some scary creature. Getting up into the volcano, the inside had no lava, but a pool of water with stepping stones and a small island in the middle. In the middle of that was a stone post, about the right size for securing someone, and red spots around it that looked a lot like blood. This looked like it was for some grisly ritual.

My friend soon came across one of the natives, "Might give you some tips about places you should visit." The blond native, didn't wear much more than a loincloth and a bow and quiver of arrows, tribal paint on various spots on her body. "Mhhh be careful," she told us, " ...as a tourist you are safe. But if you come often here, this may put you at risk." Apparentlypeople could potentially be shot in the back around here, but "You should be safe most of the time. Just keep a few things to trade against your freedom and you'll be safe, corn,chicken, banana." 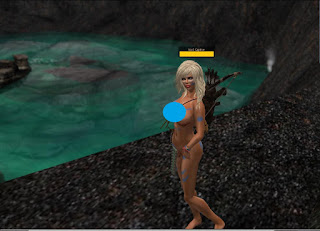 We asked her if there was anyone we should be cautious about. She answered her tribe, the Xoco, had to watch out for the rebels, "You'll notice some bodies are hung at rebels." The other tribes, Kaiabi, Xoco, Tapirape, and others, she felt were safe for tourists. But there was one thing no one was safe from, "There is a zombie this evening ... run ... if you see him." Going on, she did say there were occasional tribal wars.

The native soon had to leave, so that just left us two to look around some more. Going back down, we soon saw the entrance of a cave. Peeking inside, there was a challenge of some kind. But it was a little laggy at that hour, movingslowly, so we passed. And as it turned out, I had to head out to take care of matters in real life.

Taking another look at the sim description, seems there is an elmlent of "Capture RolePlay" here. So perhaps tourists should be a little wary. More about the sims await future articles. In the meantime, feel free to explore the area.