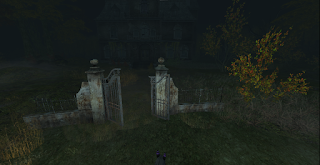 A small event is going on in this wonderful sim called Havenhollow III that just really involves trick-or-treating from door to door around the creepy neighborhood. It doesn't list a specific date it starts or ends but I assume it goes from the beginning of October till the end of it. The mansion in the above picture is just one of the locations you can visit after a travel through the graveyard, and hopefully you take the trusty flashlight given to you before you enter. The land is group owned by a private group called, Holiday Appreciation Association and is located in the region LEA22. 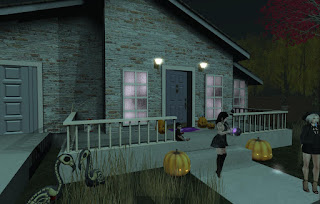 My time exploring the place was a fun one because of the trick-or-treating and just the vast exploration of Havenhollow III and the spookiness of the place. Even though it seemed to end really fast for me with the exploration part I still had a good time and honestly would go back again to hang around. Unfortunately it was quite laggy either due to the people around the sim and or that it's just my computer. As far as I am aware there doesn't appear to be any triggering content like screamers, pop-up images / pixels, or anything else. Before you go just be warned if your easily spooked or frightened by small noises. 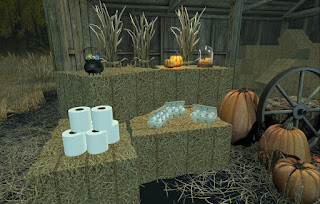 Overall I suggest you all go and check the land out while you can and get into that trick-or-treating scene. Luckily they supply buckets for a range of avatars, but I am not exactly sure what some of the labels meant save for the 'standard' one. If I had to say my favorite part of being in the event so far I'd have to choose trick-or-treating and visiting the haunted house, or at least that it's just run-down really.
http://slurl.com/secondlife/LEA22

Editor's note: Taking a quick peek over, there were separate buckets for Tiny avatars.I also noticed throwers for eggs and toilet paper rolls. So apparently Halloween fun can take the form of mischief here.
Posted by Bixyl Shuftan at 6:00 AM