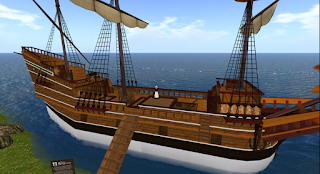 Last November, our Editor, Bixyl Shuftan, wrote an article about the Mayflower and Plymouth Colony Exhibit. (slurl.com/secondlife/Zundra/230/69/21 ). Recently, Bixyl told me they had taken the exhibit down after Thanksgiving, but might have restored it, for this season. He suggested that I go and see if I could do an update on the story. When I visited the site, the exhibit was indeed restored and was exactly as his article had described. To add to the story, I would need to write about my own impressions about what it would be like to be one of those early American pioneers. There are numerous signs, around the exhibit, that give information, but, to fuel my imagination, I search the Internet for additional details.


The first thing discovered was how small the Mayflower was. Excluding the bowsprit, the ship was only 80-90 feet long. Today, that might be a good size for a personal yacht, but how many passengers could endure spending months packed together, like sardines in a can. The exact number of passengers is unknown, but is estimated to be, counting Pilgrims and other adventurers, crew and Captain, 135. Of that number, only about 30% of them were actually pilgrims. 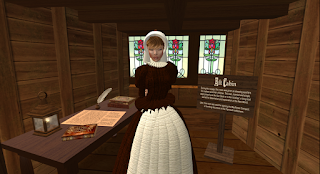 The cargo hold offered no additional space for passengers. It was filled with all the things needed to build and feed the new community, at least until their first harvest.

Due to a late start, bad weather and rough seas, that nearly wrecked the ship, they could not build houses in time for winter. The ship served as a winter home, for everybody, until the following March.


These pilgrims were committed to dropping out of conventional society, to live in a hostile wilderness, to better tune into a higher calling. Tune in, drop out? They remind me of the hippies, living in communes, that we knew so well, in the late 60's. Makes one wonder what else they planted, besides corn, beans and pumpkins. Having lived in hippy communes and spent much time helping develop communities, one gains respect for these Pilgrim hippies. Crazy as they might seem, they helped improve the goodness of life, for the whole world. 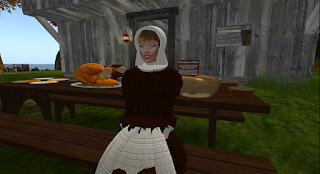 When we visit historic re-enactment sims and imagine being a part of it, we form an eternal link with it. Becoming eternal is a joyful experience. If you want to be a joyful part of history, I invite you to come explore the Plymouth Colony.
As I sit down to the thanksgiving feast, I imagine myself giving thanks, for finally getting off that crowded boat. Next time, I'll travel by VW bus.
Zundra (230/69/21 )