Titanic – The Night To Remember

I have been wanting to write an article about the Titanic for a long time now. When editor Bixyl Shuftan gave me a chance to write about the majestic ship, I jumped at the chance. I visited the location of the ship rebuilt in Second Life, as well as a museum exhibit that recently opened. Each time was a remarkable visit. 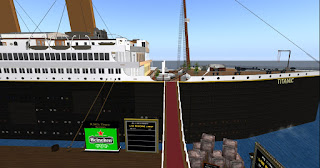 “Teleporting into the sim, one arrives at the dock. It's a few steps to the entry ramp to the ship, the start having an overhead sign "RMS Titanic, White Star Line." Besides walking up at one's own pace, there's a couple's walk animation that a pair can use to go about the ship.

Heading to the right once you get up to the ship, one can go to the bow and with a friend re-create the "I'm King of the World" Scene. Or one can go about exploring the ship, whether on the outside, inside and both. There is much attention to detail, notably in places like the stairways with crystal chandeliers hanging from the ceiling. Going about, some of the cabins seen also had fine details. The sim's website stated here, "you can be a passenger and experience the romance and luxury of a bygone era." That the ship succeeds in doing. There is also a Titanic Museum, "A Second Night to Remember," on the port side of the top deck. 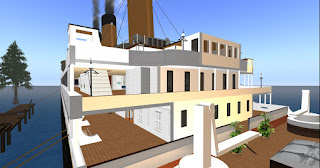 Second Life being what it is, there have been some compromises made. To help with expenses, a shopping area has been set up where one can get a selection of dresses and jewelry, and some tuxedos. The very bottom of the ship is the engine room. But only on rare occasions can one see the engine up and running. Most of the time it's packed up to cut down on lag. There is also a pool, and a wedding area. At the bow of the ship is the ballroom, where live musicians perform for dace parties. One can dance in the ballroom, or on the deck outside. 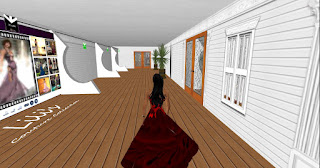 The ship is owned by Mara Menges, who bought the ship from it's builder, with Guus Menges as co-owner. The dress code is formal, with the crew reserving the right to bump off the ship those who won't answer requests to change. Animal avatars (also known as ferals to some) are also banned. This does not mean nonhuman characters are always disallowed as neko and furry avatars dressed in formal wear are welcome. 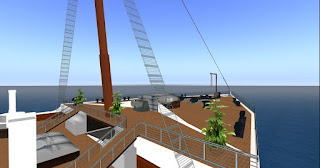 The Second Life Titanic was built by Reborn Wingtips, or Morphius Barbose as he was known at the time of it's construction. A sign on the bridge stated the ship is 254 meters long, slightly shorter than the real-life Titanic's length of 269 meters, and 60 meters high. It consists of roughly 4,500 prims, not counting the furniture. 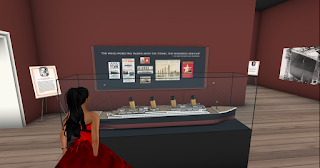 Reborn stated on the sign, "Titanic has been a build of passion. I studied it in school years ago. Claude Kirshner made land available free of charge for me to build it here in Second Life. Obviously I couldn't create the ship to detail as prims don't allow it. Plus Second Life has tier fees, etc."

"It has taken six months (for the ship) to reach its current condition. This is the fourth or fifth build. I needed to take a few steps back to make one step forward a few times. Later on as the Titanic was nearing completion, the build was discovered by Kallisto Estates, who have generously jumped at the opportunity to provide a sim to sheer Titanic with the world."

" … I think I was in college when we did a big study on the Titanic in Social Studies, covering every aspect, even some things that weren't commonly known. There was a rumor that there was actually a cursed mummy onboard. Even now if I try to imagine being on the ship that night, I get a chill, the humble men, the fear, the desperation. What was God's involvement that night? That's my biggest question." 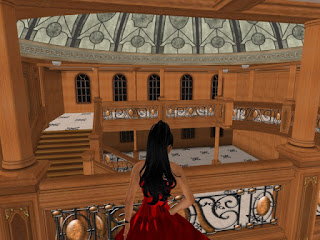 At the time the article was written, "this particular week marks the 100 year anniversary of the sinking of the real Titanic. Over 2100 visitors came to the ship on April 12th, which was also the day of the "Last 1st Class Dinner on the Titanic" event for European visitors. On Friday the 13th, there will be another such event for American hours at 5:30PM (reservations required). Saturday the 14th has the Steerage Party, from Noon to 2:30PM SL time, 2:30 PM being when the ship hit the iceberg (reservations required)."

Bixyl Shuftan went on to explain that on Sunday at 1PM April 15 would be the memorial service. This event was planned to take place outside the ship at the Titanic memorial on the sim's land, and was is open to all with no dress or avatar code on this occasion. In an article on the Metaverse Tribune, Mara was described as creating the memorial after having met the great-grandson of Captain James Smith, "she discovered that many of those who were lingering at the memorial were relatives of witnesses or survivors." 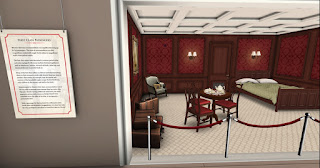 “There is also a souvenir shop where one can get a memento of their visit to the ship. Considering the history of the ship and how its memory is kept alive by numerous books and movies, such as the one by James Cameron a few years ago, this is one build that is unlikely to be forgotten, and a place one may end up returning to again and again."

The entry point to the Titanic sim is at Titanic (128, 191, 134). For more information, one can check the Second Life Titanic's website at http://www.titanicsecondlife.nl/.

Since the 2012 article was written, there have been a few changes. The shopping area at the docks is larger than it was then, more clothes and a few cars. But it remains a location where parties can be found in the back of the ship at scheduled times in the day. 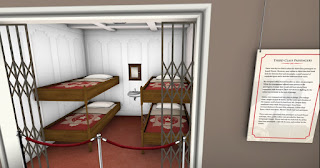 While I was not able to find anyone to talk to, searching around I did find out about an art museum exhibit in "The Vordun" art gallery called "A Night to Remember." Those entering are handed a HUD that has the name of one of the passengers. Mine was second class passenger Mrs. Irene Corbett. The exhibit described the construction of the ship and the excitement among the public whom saw the ship as an engineering marvel. It would show the contrast of the conditions of those of those traveling first class and those third, "The Edwardian culture was one of great class separation, and nowhere was it more apparent than the Titanic." And it would describe the danger of ice at the time, show pictures of the wreckage discovered in 1985. 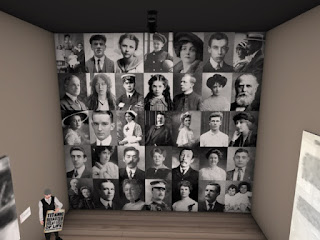 At the end, the exhibit would reveal the fate of the passengers and crew. There, I would find that the name on my HUD, Mrs. Corbett, was among those whom had not survived, among those who met their end in the icy sea, deceased at age 30.

The exhibit is at Fancy Decor sim (78/98/32). This is a new exhibit, and it should be around until October. Emery Milneaux is the curator of the building, in real life a freelance artist specializing in graphic design.

Bixyl did very well in writing about the Titanic in his 2012 article. I do not wish to draw attention away from the ship. It is the last thing I'd do. What I want to do is remember. Titanic and that fateful night when it sank, taking over 1,000 passengers with it. All because there were not enough lifeboats. It was a terrible night back then, and still is today, regardless of how much has happened in the past century. To this day, the ship has proven to be unforgettable. We will always remember the ship.