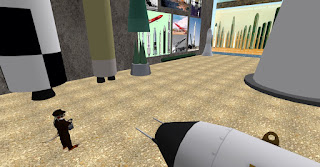 Clowns to the left of me, jokers to the right.  Real life has been an active place lately in the area of nuclear threats.  Some truly scary people have their fingers on the button.  I am not feeling the love.

SL is a place of fun and fantasy.  Beauty abounds, find friends, role play, dance and get away from the realities of life.  But just like real life, it is all in here.  Educational opportunities, religion and even hate groups.  Museums of all kind.  Some to celebrate life and art, some to commemorate disasters, past or future.  This one covers both.  What damage we have done, both in usage and in testing of thermal nuclear weapons.  What damage we can do.  What we hope will never be.  Who has them, and who they can reach?

When you see a small red pyramid, click on it for a Wiki link, giving you the design, history, capacity and more for the things around you.  There are so many places to TP to, control rooms, missile silos, defense systems, drones, even Sputnik makes an appearance.  Tour a nuclear reactor.  See the rods cooling.  Click and get the information.  Learn about the Manhattan Project.  The Cuban Missile Crisis.   And North Korea. 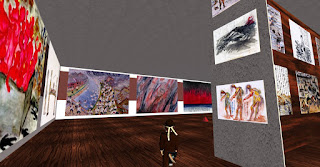 The spot I leave for last is very important.  Real drawing made by survivor children.  This is real.  They tell quite a story, if one takes the time to listen.  Please save it for last.  But please do go.
The gallery of children’s drawings after Japan was bombed is particularly disturbing to view.  Their depictions are heart breaking, to say the least.  Skin melting off of people, faces in flames, skeletons laying in the streets.  These are the real witnesses to horrors unimaginable to us, and children to boot.  And, maybe, never got to see adulthood.  Their horrific artwork is the epitome of the whole museum.

This site might not be cheery and cute, but touch the truth that is there.  We have done some damage.  The next round is the last.

Editor's Note: While the atomic bombing of the Japanese Empire was controversial from the start, in these politically-charged times, it is possibly more than ever. Critics charge the bombings never should have been carried out. Others respond that the alternative was to continue the conventional bombing of Japanese cities, which would have resulted in about as many or more dead. And then there was the planned invasion of Japan. Given the fierce resistance at Iwo Jima and Okinawa, it was estimated that the invasion would have cost about a million American dead and wounded, and four million Japanese.
Posted by Bixyl Shuftan at 6:00 AM