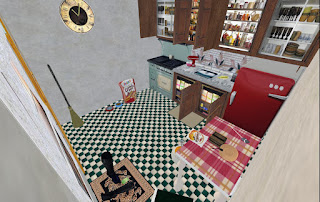 For longtime residents one of the classic sims many miss is the Greenies Home. Early in Second Life's history, a group called Rezzable created the place, and for a time had a number of spinnoff areas as well. But they soon began taking them down, and in June 2010 Rezzable announced Greenies Home itself was closing. Since then, there have been a few attempts at creating giant areas. Recently the Newser heard about two, at Happiness and Athen Shire. 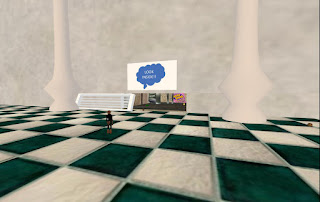 The first I found out about in Nance Clowes "Fun Rides and Amusement Parks" group. Nance described the place in a group announcement, "Most long time veterans of amusements in SL fondly remember, and wont shut up about, a long ago place called Greenies. Well, there is a NEW place somewhat modeled on it, and its as close as any newer people are going to ever get to it. There is also a FULL amusement park nearby and a SECRET extra greenies area. " 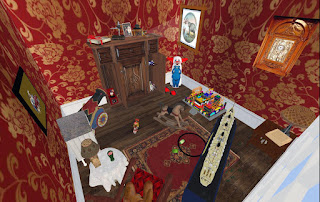 Checking the place out, I found the cabinets could be opened, but what was revealed was just a flat picture rather than three-dimensional objects. But looking around, there was an open air vent I could duck into. There, I found rezzers for a couple vehicles. One was a mouse-powered cart that went about on the floor for a while. The other was a bug that when ridden would carry you up a pipe that most would not have noticed unless they looked up, and out through another air vent. 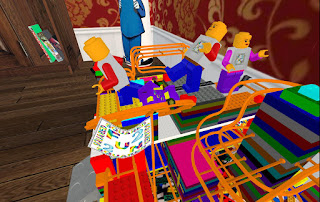 Checking around the large show, I found a couple portal doors. One led to a "toy room." Once more, there were drawers one could open. This time the objects were three dimensional. There was also a Lego brick fun ride one could rez a car, get on, and go on a short fun little roller coaster ride. 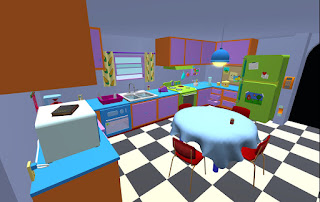 The second is the creation of JanosX Resident of the Raglan tiny community. One can find a portal to it at ground level at Athen Shire (226/101/22). Going in, one finds themselves in what looks like a room with no exit aside from a portal back down to ground level. But clicking on the walls, eventually a door opens to outside. And stepping through, you see a giant cartoonish kitchen. Looking around, you see clues to whose it is. There's a drawing on the fridge by a "Lisa," the Microwave is from "Kwik-E-Mart," the beer on the table is from "Duff," and clicking on the phone, you hear someone call out, "D'oh!" It's a tribute to "The Simpsons." 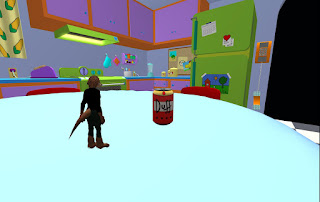 Hamlet Au had a few words with JanosX, "It covers 2 of my parcels, and it's several maximum size meshes, some made in SL and meshed with a mesh generator, some with Blender... it's all optimized meshes to get the lowest land impact possible, [you] can make giant meshes with low land impact if you play good with the physics shape types." JanosX also did a video of the build.

Unfortunetely, Hamlet also reports the Simpsons Kitchen will be gone by sometime on Monday. So you may want to drop by quick, especially if you're a fan of Homer Simpson and his family. Otherwise, you too will be going "D'oh!"