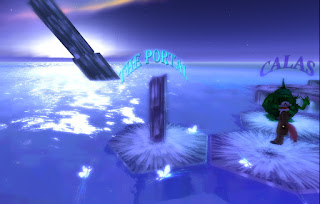 One place in Second Life noted for it's fine design and coming up with new things every year is the Calas region, owned by Ty Tenk and Truck Meredith. Usually Gemma Cleanslate is the Newser writer who takes care of articles there. But with their new Halloween area this year, she thought it was about time for a fresh pair of eyes. So I went ahead and headed to Erebor for "Dark Moon."

When one thinks of the moon on Halloween, it's usually the bright moon shinning over a dark and spooky forest. That wasn't the case here. Appearing in a purplish sky and shallow water on some crystal hexagons, over one were the words "The Portal." So I clicked on that. The next thing I knew, I was on some baren landscape with some circular structure ahead of me, and some figures around it. Getting closer, they were a mix of aliens and human astronauts. But looking closer, the astronauts were dead. All but one of the aliens appeared lifeless as well, except for one with a sign: "Dive in." 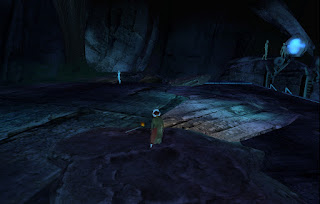 Going in, I found myself in a cavern with metallic space-age structures built into it, with water flowing on the ground in places. The detail, as usual for Calas, was very good. I had my headphones on, and it had detailed sounds of the water trickling nearby, and appropriate theme music such as that of the "Alien" prequel movie "Prometheus." Looking around however, there were some mixed signals about the aliens. While some were helping to point out the way for you to go, others were not so friendly to other humans. 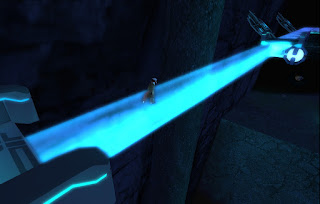 Flares help cue you on which direction to go, You will encounter things such as light bridges, and you will encounter monsters. Unfortunately in this sci-fi adventure with horror tones, the reason they're not going after you is that they've sated themselves on various NPC humans ... or have they? At one point, you'll find yourself in an Earth library. The end of your journey? Nope, you'll still have further to go. Finding the right path may mean occasionally searching around a bit. You'll get an opportunity to float around weightless, though with some limited control. Eventually, you'll see some human kids walking your way from a flying saucer. But as they come closer, you'll see they're not exactly wanting to be friends. 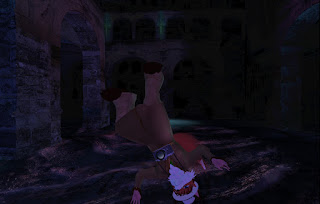 The last cavern was very dark in places with few flares, so it took me a while to find the way out. Once I did, I was transported back to the purplish world. Looking around and noticing a spaceship ahead of me, I decided to walk over, wading through the water, to check it out. I saw a few creatures going just over the water. There were some stairs to the ship, and climbing on, I was greeting by the message, "Welcome to Calas Galadhon's "DARK MOON'S MOTHERSHIP... thank you and enjoy your visit." I found a schedule of some live music acts appearing here at times across the month. 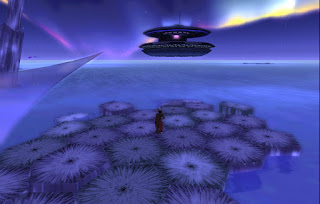 I forget how long my journey took me, probably over an hour. With the monsters and blood, and inhuman cold aliens, the place isn't for everyone. But in my opinion, Ty and Truck have done a first class job in this sci-fi horror theme adventure.