More On The Sunweaver Estates Expansions And Other Changes

It's been a time of change and growth in the Sunweaver/Angel community's land. In August 1, Nydia Tungsten who owned Sunlight Bay and Cynthia Farshore who had Pacific Waters agreed to swap sims. Then several days later, there was a new sim on the map: Sunweaver Eclipse. A little more than a week later came another: SunWaterOne. These new sims meant open water to boat around in, and beach area to relax on. 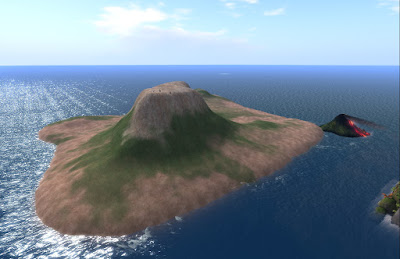 But if there was a SunWaterOne, would that mean a SunWaterTwo? Finally, on September 29, it arrived, located south of Sunlight Bay and east of SunWaterOne. Rita Mariner, the Sunweaver's leader, invited me over for a look. It was a mountain rising out of the sea, with a small volcano nearby at the time. 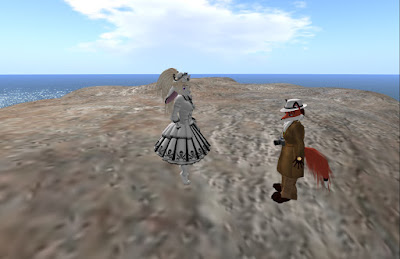 Rita told me the sim would soon be changing, "Maybe hollow it out and put in a bunch of secret tunnels, and cool maze, with stuff for folks to explore and stuff to find, and with the height of the hill here, could have multiple levels. We have 5000 prims to play with, I am sure we can come up with some fun stuff." She also mentioned the possibility of trading the sim with Oriana Sun, who had rented SunWaterOne since I first wrote about it, "I can suggest the secret tunnel maze to her and maybe get Shocky to assist. She wants folks to visit the sim, and what better way." 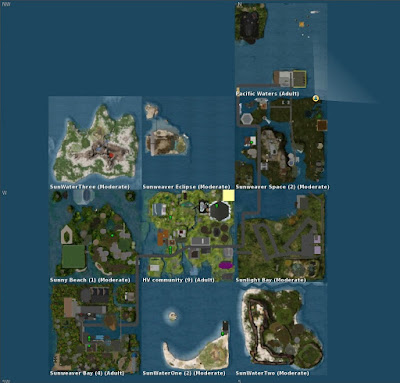 Two days later on Sunday October 1, SunWaterThree would arrive, west of Sunweaver Eclipse and north of Sunny Beach. The main body of the Sunweaver/Angel sims was now ten sims large, Sunweaver Isle a little to the east and the Purrfection Estates sim far away. Rita told me these new sims will likely be the last new ones for a while. 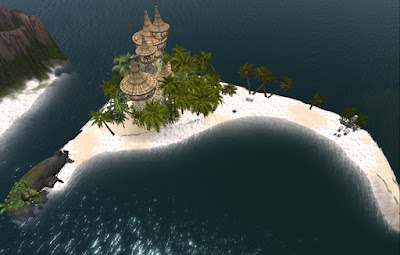 I met briefly with Oriana at SunWaterOne, which was now hers and was different from when new and the temporary location of Nydia's "Margaritavile" hangout. She showed me around her place in the middle of the island which had been enlarged in size a little and shifted to mostly in the southeast corner with a thin part sticking out into the southwest. 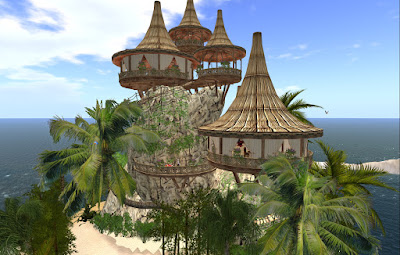 There was a tunnel to a cave underneath, which she had yet to decide what to do with. The main build was some island huts built around a tall rock, linked by a wooden walkway lit by tiki torches. There were a few macaw parrots flying around. She showed me the games that were placed here and there for others to come by and enjoy. 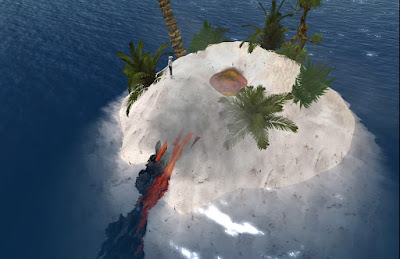 In a visit later, I would find more things there that were either placed there later, or perhaps I was to focused on Oriana's tour to notice. In the middle was a tiny island with some lava bubbling in the middle, though still had sand and trees along the edges. 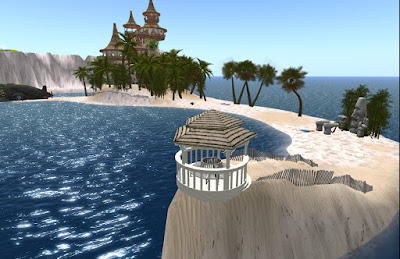 At the western tip, there was a gazebo people could sit in. Not far to the south was a stone head that reminded me of the ones at Easter Island, with some proportionally sized stone hands and feet nearby, placed as if there was a body in the sand. 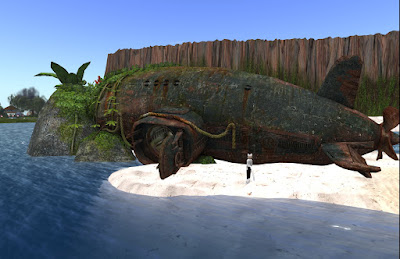 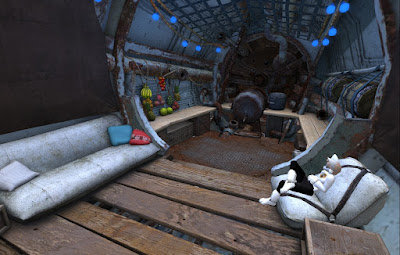 The inside had been furnished to make it look like people were residing there, made into a hangout people could relax in. One time I dropped by, a couple visitors, at least one a friend of Oriana's from outside the Sunweavers, were there. 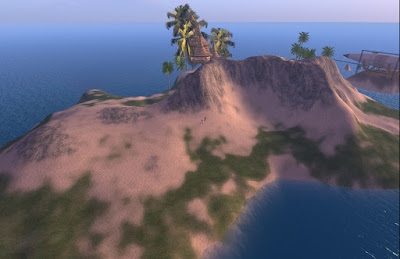 Rita would show me SunWaterThree and it's builds before I saw the changes at the second one. 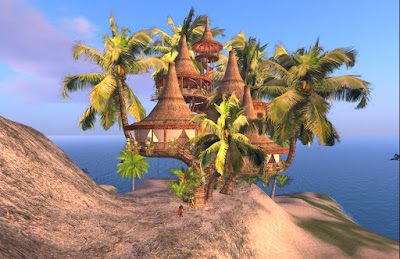 On it's first day, there was one sizable build. Rita had set up a complex of tiki huts the same kind as Oriana's, though there was no tall rock in the center. 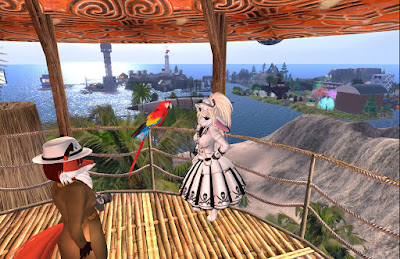 These huts were all on stilts, with the wooden ramp going from the ground and around to successively higher ones until one reached the top. With one's viewer set to 1064 meters, which my Firestorm allowed, there was quite a view available of the surrounding land. Maybe it was me, but the macaw parrots flying around seemed more numerous than at SunWaterOne. 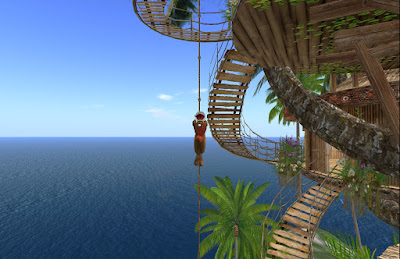 There was one addition to the place. There was a rope that one could climb up from the ground to one of the higher huts, or make their way back down. 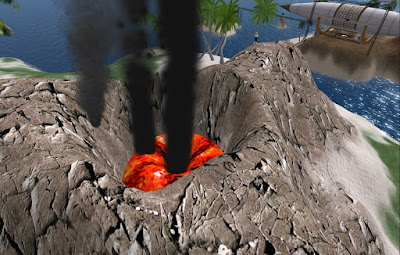 Checking a couple days later, the mountain looked volcanic, with bubbling lava and smoke plumes, and a bit rockier. 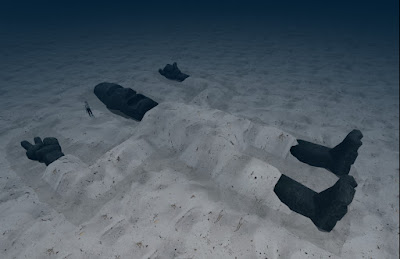 Back at SunWaterOne, I saw this under the water. More Easter Island humor. 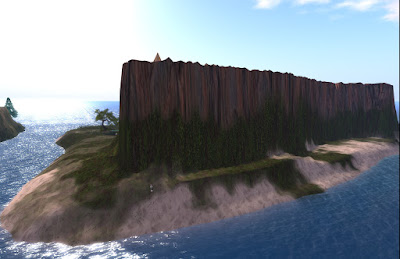 In a few days, SunWaterTwo had changed. The island was in the middle of a renovation that as of the writing of this article is still going on. The place was also Oriana's. I would later hear from her she was moving to here. 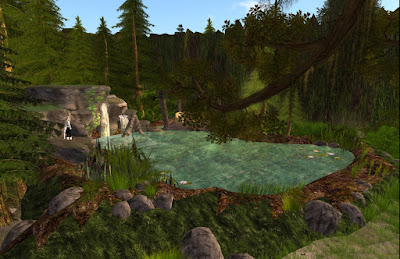 A few places looked complete, though may change as the building goes on. 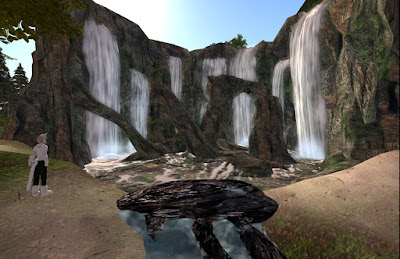 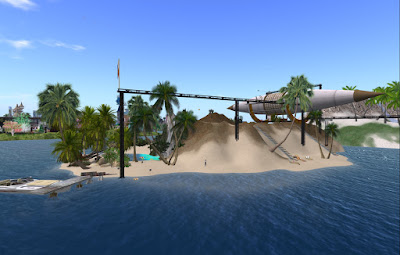 Sunweaver Eclipse, which is under Shockwave Yareach, has a smaller island than the other new places. The main build is his skybox, which we won't publish any pictures without an okay. 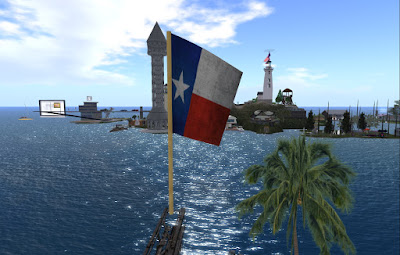 The Lone Star flag of Texas,Shockwave's home state, flying overhead. Behind it is a tower in Sunweaver Space that I first thought was Jenni Greenfield's tower relocated, but it's a different design. Further back is Pacific Waters, now under Nydia Tungsten. 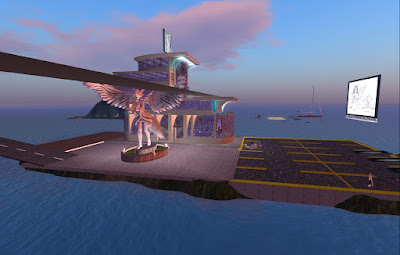 Pacific Waters is now the home of the office of White Vixen Enterprises, which has under it the Angel sims, including Purrfection which is some distance away from the Sunweaver sims, and the Happy Vixen Beach club. Further north is Nydia's manor and her theater set up in the water, described as the "float-in theater." 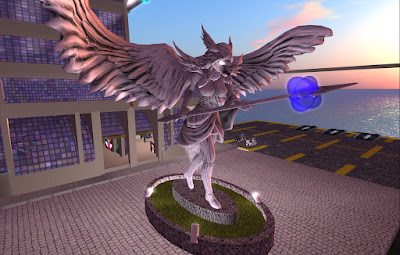 The work on the new Sunlight Bay, under Cynthia Farshore, is close to done. Farshore Field is all laid down, with lights that shine at nightfall, and what look like tire marks on one of the runways. 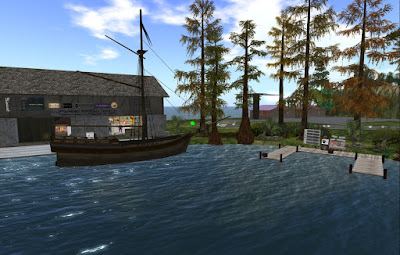 The northeast corner of the sim, the port area with docks, has a store with Victorian-era clothes and other goods one can buy. There's also a 7Seas fishing spot. There were also a few trees with a swing and a couple cuddle spots. 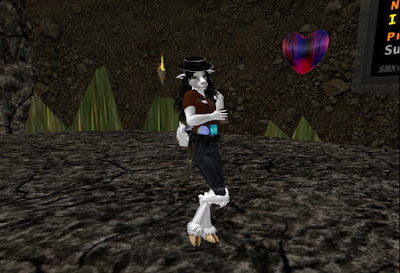 Cynthia (picture from an event at Sunlight Bay's Goblin Cave), told me the 7Seas game would soon be joined by something called Neo, "Zorro (Wuramunga) says Neo is college compared to 7-seas." She went on to say, "Now that we have the new sims, I will have to see if I should run the rails through or the road. The railroad track is pretty much done to the sim border of Sunlight and Space."

Cynthia did say she's had to adjust her plans, "My plans got a bit changed with the new sims. That caught me by surprise." She may add some forest in places. Her train needed some repairs, but, "as soon I get that done I hope to have the train running, at least (the) short line till I get the other sims railed."

It's been an active time with sims being added and sims already here changing. And the changes aren't finished yet. Stand by for more developments.