I came upon a memorial recently.  I took a look all over the location.  There are so many monuments here, and they are all about people whose lives were taken away before their time.  There are young people who passed on from AIDS, cancer, and suicide.  Some of the monuments pass out notecards, describing about each memorial.  There are some memorials about certain young adults.  Some memorials are about groups of people. These memorials have names on them. Each memorial comes with a notecard, giving us a description of what the particular memorial is all about. While the memorials are sad, they also serve as what they are meant to be – a memorial to those who passed away.

I have gotten notecards from three memorials.  The first one is from Jamey Rodemey's memorial.  The first paragraph is, “Jamey Rodemeyer (March 21, 1997 – September 18, 2011) was an openly bisexual teenager (although he referred to himself as gay on Tumblr and some You Tube videos, known for his activism against homophobia and his videos on You Tube to help victims of homophobic bullying. He committed suicide as a result of constant bullying and being called gay.” 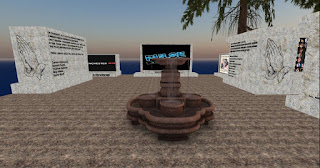 The second one is from Ryan White's memorial.  The first paragraph is, “Ryan White was diagnosed with AIDS at age 13. He and his mother Jeanne White Ginder fought for his right to attend school, gaining international attention as a voice of reason about HIV/AIDS. At the age of 18, Ryan White died on April 8, 1990, just months before Congress passed the AIDS bill that bears his name – the Ryan White CARE (Comprehensive AIDS Resources Emergency) Act. The legislation has been reauthorized five times since – in 1996, 2000, 2006, 2009 and 2013 – and is now called the Ryan White HIV/AIDS Program.” 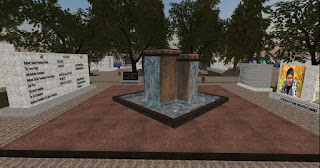 The third one is from 2016 Pulse Nightclub Shooting memorial.  The first paragraph is, “During this difficult time, we offer heartfelt condolences to the families of the 49 victims who lost their lives during the Pulse tragedy. To the families and friends of the victims, your city is with you and will continue to be with you as you deal with this unimaginable tragedy.”

The memorial is there for a reason.  It's to help us remember people who have passed on.  As I head out from the memorial, I leave with a feeling of sadness. So many lives which ended too soon.

Editor's Note: Somehow the wrong SURL got put it. It's been corrected.
Posted by Bixyl Shuftan at 6:00 AM