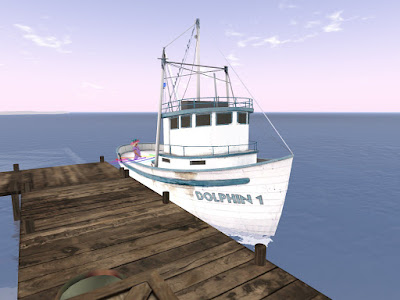 You all know I have a houseboat on the new continent of Bellisseria and really am  loving it.
(http://slnewserdesign.blogspot.com/2019/05/a-look-at-linden-houseboat.html) I have been exploring and visiting locations there.There are so many places to visit and enjoy that are open to all residents. 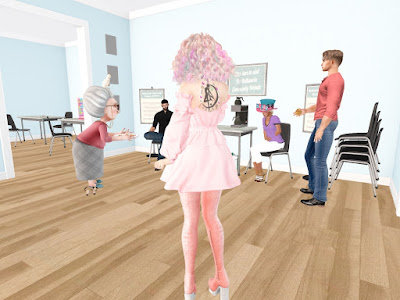 I had coffee with some residents last Saturday morning at the community Center. This is open to all residents of Bellisseria and guests. It was nice to meet a few of the community members. . I arrived first dressed in my greeter outfit for the sl16B as I was on my way there to greet.V i n n    L a n d a r (Vinn Landar) , who was hosting coffee, was there  ready with the coffee . DJ Usagi (GreatBigHippy Resident) and Skot Kinsella arrived and then Granny Parker (ParkerBroox Resident) came bearing homemade cookies. It was fun. 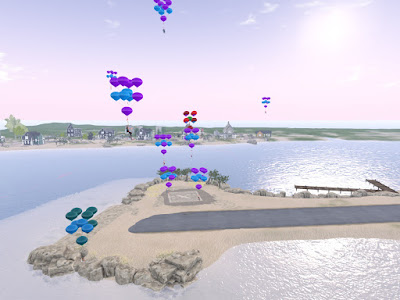 The Drivers of SL ( more about them in a later article) held an event and I joined in! It was an annual  remembrance of the amazing chair balloon ride of Lawn Chair Larry Walters. Check him out on the web. The balloons took off and traversed almost the entire continent and ended at the Fairgrounds. It was a startleing   sight in the air and I am sure from the ground. One resident shouted at me in IM, “ Ride ! Ride!” 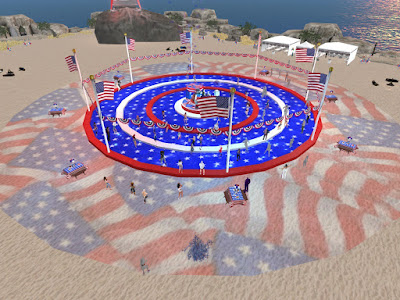 The July 4 celebration at the Fairgrounds was spectacular! The decor was amazing. People  had to wait to enter there were so many attendees. The DJ, Doc Rast (rasterscan Resident) provided
sparkling music for the dancing. Several moles were in attendance , Squeaky, Ancient, and Patch Linden was there and Saffia Widdershins dropped in to dance . 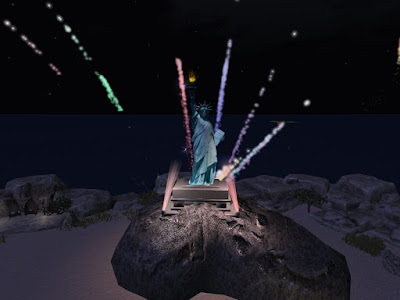 Speaking of sparkling,  Later, after dark Patch set off magnificent fireworks around the statue of Liberty that stood on the Fairgrounds. It went on for ages and lit up the entire sky. I think he had help from some of the moles and residents. It was a huge undertaking. I would call the event a stupendous success. 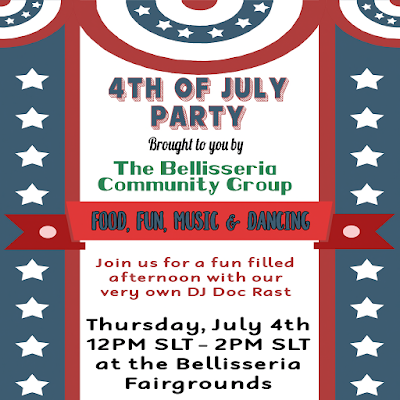 T. J. Hooker (ThomasHooker Resident) was saying, "The team we had working on the event was myself, MarkusBrant, Evangeline Ling, and Restaurant Organiser." 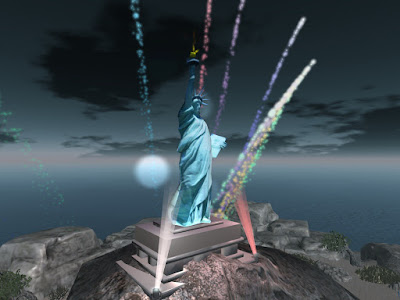 There are many groups forming across Bellisseria.. Citizens, Community, Riding, Events, and all seem very active . It will be interesting to watch it all grow. The continent is off to a great start and I am glad to be a part of it all. More homes are being opened as fast as the Moles can get them done and I know that many premium residents are holding their breath to get one. It reminds me of the Bay City opening , only bigger. More to come on my adventures there .