Some Political Locations In Second Life

Although many Second Life residents come to the virtual world to escape real-life matters, what goes on in reality is often reflected here in some way. And that includes politics. With Labor Day being the traditional start of the final stretch of the campaign season, this is when political stories and events in real life happen more often. And here in Second Life, there are some political-themed locations. Four years ago, places like the Trump Manor and Trump Wall made the news quite a bit. This year, there hasn't been a place that made headlines yet. But a search did turn up some locations. 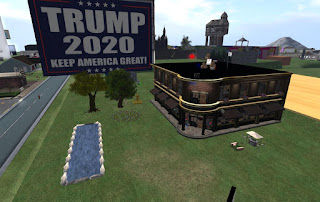 Although there is a Republican group in Second Life, the location listed in it's profile was closed. But there was a Trump Pub. It was a two-story brick building with red white and blue lights forming a flag over the entrance. There was a huge sign next to the place. On the inside were banners both mocking the opposition and displays of bravado, "Caution: Armed and Deplorable." The second floor was more about fun with various games.

The radio stream on the land was that of Alex Jones' "Info Wars," which has been discredited by both liberals and conservatives alike. On the outside were statues of George Washington and Pepe the Frog. Some of the neighboring land has been bought by people opposed to Trump, whom as of the writing of this article have posted signs and builds mocking the candidate.

Although avatars of all kinds were welcome in the 2016 Trump Pub, when looking over the new place with an alt, someone at the front door yelled furs were unwelcome and threw me out. While it's probable this was someone in the staff with opinions contrary to the owner, this one incident suggests nonhuman avatars might get an unwelcome surprise. 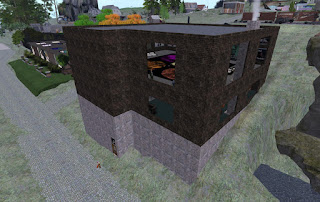 For the Democrats, there were two locations. One was the longtime Cafe Wellstone, which has been around at least since the days of the 2008 election. Although it was an open-air location four years ago, today it's a simple brick building, with a simple entrance next to the road leading inside. On the main floor were a couple campaign signs and various cartoons mocking their opposition, and one of Captain America punching the Nazi cartoon villain the Red Skull. 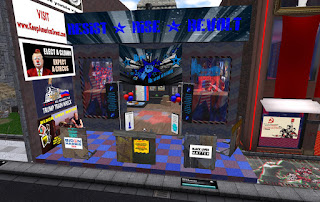 The newer location for the Dems was the Blue Revolution HQ. Their logo over the front door was a raised blue first, over that being "Resist, Rise, Revolt." Out front was a picture depicting candidate Biden as a Rambo-esque figure, as well as signs praising Black Lives Matter. On the inside, on the floor was an electoral map of the United States. Considering this was a pro-Democrat location, it was showing quite a bit of red. There were photographs of various protests, and information explaining their positions, as well as a Media Bias Chart (one that while it was no surprise positioned the far-right Breitbart as useless, it positioned the conservative National Review as being a more serious source of news than CNN). And there were cartoons and pictures poking fun at their opposition.

It should be noted that Blue Revolution was between two other locations. To it's right was a pro-Trump location, one with dancing figures. To it's left was a Communist Party HQ, calling for revolution. It wasn't lost on me that this is not unlike how the center-left sees itself, between reckless Trump supporters on the right, and Marxists wanting real revolution on the left.