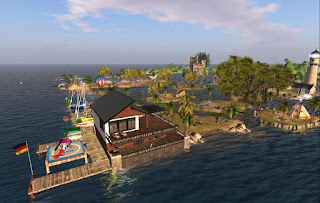 A friend recently told me about a place in Second Life she thought was worth mentioning, Blue Lagoon. "It is a gorgeous sim." she told me. The place was at the Isle of Blessings sim, so I headed over.

Arriving and looking around, I was under a thatch roof with a few signs of the sim owner, Bolera Rau, and moderators, some pictures of activities and a parachute giver. Looking around, I saw a number of small tropical islands. Going about, I saw a boat dock with a rezzer for a hang glider which could be flown about. There was another craft there that I would later hear was a kind of hovercopter that was available for anyone to fly (I never asked about the red and white helicopter). 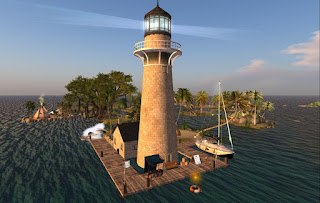 One small island had a teepee and some drums. Another had a lighthouse with a small building and a dock with a sailboat. In the distance from that was what looked like castle ruins. In the middle of the sim was a small island with two hot-tubs, the smaller on a structure over the larger one with some stairs leading to it. There I would find the sim owner Bolera. She and I had a few words. I asked her where she got the idea for the place, and she answered, "Overnight in my mind. ... ideas come in my head." 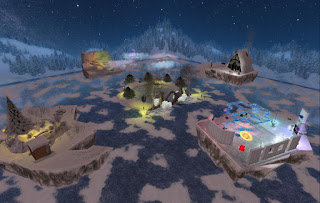 Bolera offered to show me around. She took me to a small boathouse in a place far above the sim that looked like it was for a couple to relax for a while. Next was her "Winterland" area, also far above the sim, "For ice skating. Also, club here." This area had five islands, one circlular central one, one with an ice club on it with laser lights, a third with a cabin with a cozy bed and fireplace. She would remind me one could ice skate across the surface, and say she would hold private parties at the club. A third skybox had a small cave. A fourth had a beachhouse and a smaller building, also for couples to relax for a while, the house having a sauna. 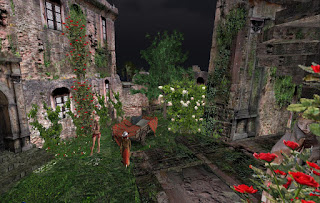 Back on the surface, she showed me a submarine under the water, one with a bedroom. She would also show me the castle ruins. She pointed out the sim next door, Blue Marine (Awesome Land), saying it was hers as well. There were a number of boats and docks, and boat races were held there. Bolera would say the white building on ground level at Blue Lagoon was off limits as people were residing there, "Private villa." The rest of the place was open to the public, including the smaller heli-craft and glider. 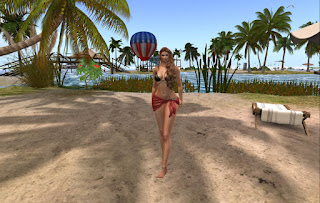 She would say that the sim took a "very long" time to build, "I rebuilt (a) couple times. Now I like it, and leave it as is. ... I did build all alone, had no help. ... I never leave to go in other sims. Not wanna build my sim like others, so I not look, just from my own mind. ... I stay only here in lagoon. I only leave it when I must, or check things out." Bolero would also say she has her own Flickr account where she has a few pictures: https://www.flickr.com/photos/182007743@N05/?

A picturesque sim with plenty to see, and some fun things to do.