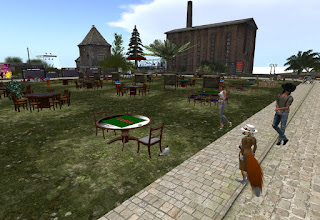 If you're looking for a place to play board games in Second Life, Boardgame beach is one of the best places to go, if not the best place inworld. There are dozens of games there from old favorites such as En Garde, to more recent favorites such as Greedy, to classic board games like chess and checkers, to SL adaptations of 20th Century board games like Life and Monopoly, and many more. Some of the games I had never seen anywhere else in the virtual world. The games are in two separate areas a little distance away from one another. If someone doesn't quite see what they're looking for in one, they can head to the other. 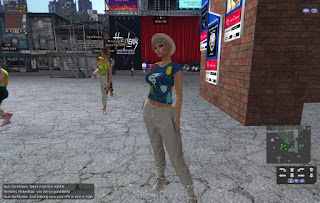 I had a talk with Aries Oh, the owner of Boardgame Beach. The talk happened to be on the day there was a paintball event there in a skybox above the sim, followed by a band playing music. "We have around 100 different games," she told me with a smile, then chuckled, "I guess that makes me a game hoarder?" When asked where the idea of the place came from, she answered, "I started with Heart of Dragons, the neighboring sim. We played En Garde there, and had a lot of tournaments. And from that it went on to board games. I like the social part of nice friendly games. I guess that is why." Of the skybox, she would later mention it had only recently been set up for the paintball match.

I mentioned the variety of games, and Aries answered, "I have picked up some different games over the years. Mostly from getting suggestions from our guests. There are some great game scripters out there. (smile) I see that there is a small number of games that are most popular. But I can't help trying to show people some of the lesser known ones." I asked which were the most popular, and she replied, "I think Hand & Foot and Skippo are the most popular ones. But we have some dedicated players of RummiQub and On-A-Roll. I think my favourite is team version of Skipee. ... Skipee is a variation of Skippo. And in the team version you can use your team mates cards on the table, and also stack on their stacks, so you have more cards to play with. And it has some element of blocking, and it is easy to introduce new players." 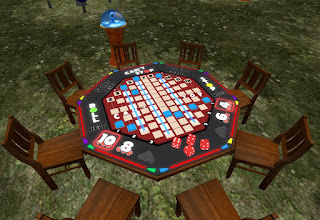 I then asked which obscure games turned out to be hits with some regulars, or she personally found good. She thought for a moment, "I think it varies a lot over time, and with whom you play. Khet/Reflection is a good game, not many players. And one I don't remember name of, let me check. Oh - Shalosh, the card game too. Can't find the one I was looking for. It's an old Egyptian games, where you throw some sticks. It's a small game from K.R. Engineering. I can check downstairs later. And Can't Stop from Rifkin Habsburg, is great. K.R, also has a version of that. ... A push-your-luck game, he called it. He was also the maker of the SL version of En Garde." Another game of his, Frootcake, also came up, "Frootcake is of course a good game. I am using them as long as they work. Rifkin was a genius by making world and local rankings for his games. It made people addicted. He had one where you should fit tiles together ... Take It Easy. And he also had an obscure one - Danger Zone."
Aries went on, "The Egyptian sticks game was Senet. ... Oh: When I look down the list, I see Bug Dice too. I had a guest here for years, who played that almost every night. He passed away this winter, and I get a bit sad when I see that table. It was his place. Shows how you get to know people here is SL - over a nice little boardgame." She would describe the game, "The Object of Bug Dice is to get the best score on 15 dice (3 sets of 5).  You get 3 rolls to do this (the initial roll of all 15 dice and 2 additional rolls of all or some of the dice). For each set of 5 dice on the table  the allowable combinations are: BUG (five of a kind) counting 30. Full house (any three of a kind and any pair) counting 28. Large Straight (ie: 2-3-4-5-6) counting 30. Little Straight (ie: 1-2-3-4) counting 21. it's a Blue Brock game."

She also mentioned the sim has escape rooms, "You enter a room/house, and the door is shut, so you have to use objects avaiable to "solve puzzles" to find/make tools to get out. I think they are about the same in difficulty. I don't know many who have actually solved it. Less than a handful. One is a bunker, the other a cabin and the third is a library. So different backstories." 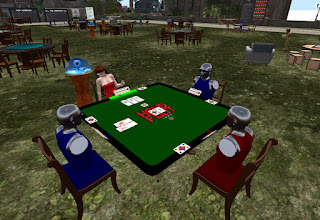 Eventually, someone else walked over to talk to Aries, Geeza Matfield. He had been out of Second Life for a while, came back, and seeing the crowd here on the map thought there was a tournament. Aries introduced me to him, "Geeza used to be one of the regular and very good En Garde players, from the earlier days. (smile) "Good place to come," Geeza told me, "Aries has been running this place for years." Of his strategy for En Garde, "it's a bit like poker and blackjack, count the cards and try to read your opponent. If you can do that, you have a chance." Aries grinned, "I think Geeza also liked to psyche out his opponents." Gezza chuckled, "I did like scaring that little bunny." Aries told me the fencer in question was orginally in a pirate roleplay, "but in the end, she was a tiny bunny." Geeza commented, "she just got scared by my costume a bit at first till she got to know me. I think she was in it more for the social than the serious competition some of us treated it like. She was usually delighted to win a game, then hang out." Another person joined the conversations, and there was talk about players in the past whom passed away, or stopped playing when they had kids or something else in real life demanded attention, "We lost a lot of players and friends over the years. Both to death, and to life." Geeza himself would say, "I wouldn't mind a little comeback but weekends are pretty much impossible these days." 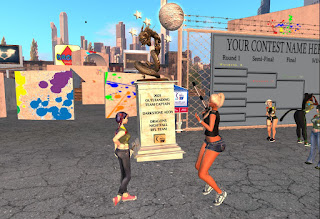 Before I left, the band playing saw me and thanked me for coming by.

So it looks like people will continue to have fun at Boardgame Beach for some time to come.